Edith Walton Deeds was the driving force behind this Dayton landmark which was dedicated on Easter Day in 1941. After hearing the music of a carillon in Bruges, Belgium, she decided to build one in her hometown. A carillon is a musical instrument that is played from a keyboard and comprises of at least twenty-three bells that can cover at least two octaves. The Deeds Carillon was completed and played for thousands of visitors at its dedication in the midst of World War II. Though it has since been automated, the carillon is still played manually every Easter. It is also decorated with 20,000 lightbulbs every winter as it transforms into the “Carillon Tree of Light.”

The 151-foot tall Deeds Carillon was dedicated on Easter Day in 1942. 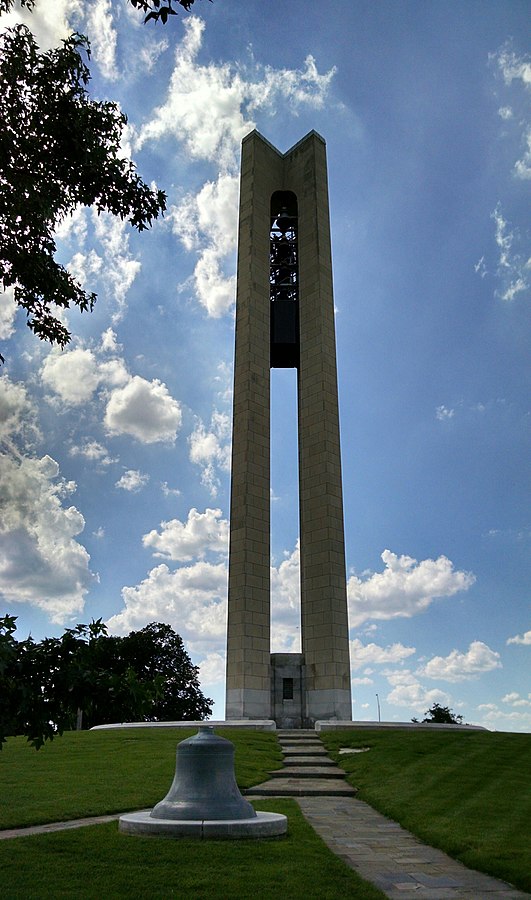 In 1930s Bruges, Belgium, Edith Walton Deeds, an accomplished musician and wife of Dayton businessman Colonel Edward A. Deeds, heard the sound of carillon bells. Upon returning to Ohio, she and her husband commissioned the construction of the Deeds Carillon. The architectural firm who designed Rockefeller Center in New York, Reinhard & Hofmeister, was hired for the project. At 151 feet, the height of the carillon’s towers made it the tallest in the state. On August 23, 1942, the carillon, only one of six in the nation, was dedicated.

The tower itself was made from Indiana limestone, while the bells were cast in Troy, New York. Eight of the thirty-two bells were made to be silent as a tribute to the eight members of the Deeds family. The largest was dedicated to Colonel Deeds and now sits on display at ground level.

The carillon was renovated in 1988 with fifty new bells imported from Holland. Seven more were added in 1995, making it the largest carillon in Ohio once again. In 2010, Verdin Co. of Cincinnati installed a device that allows the Deeds Carillon to play thousands of tunes. Three times a day, the carillon plays music automatically, though some “carillonneurs” still perform on it manually every Easter and for other special occasions.