Forest Hill is a rural cemetery with sprawling landscape of rolling hills, picturesque vistas, winding paths and a myriad of ancient trees providing shady spaces and cool breezes. It is a place of still contemplation despite being located amidst urban Madison. It is a place of diversity where those of Catholic, Lutheran and Jewish faiths, soldiers of the Union and Confederate Armies, Native Americans and white settlers lie together in eternal peace. Contained within the grounds are the graves of prominent leaders, politicians and activists. It is here that the spirits whisper the narratives of the history of Madison, Wisconsin and the nation.

Carriage Step “In the mid-nineteenth century, Madison’s most prominent citizens would drive their carriages to the cemetery on Sunday afternoons to picnic. Only about 12 percent of city owned a carriage at that time. 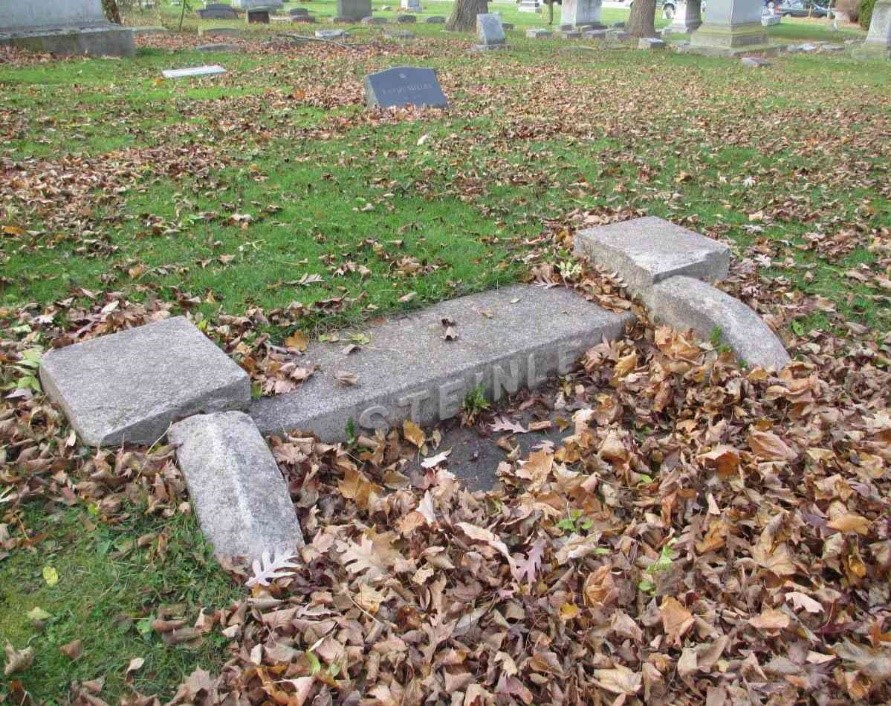 William F. Vilas grave William F. Vilas (1840-1908) graduated with the original UW class in 1858. He was a leader of the Wisconsin Democratic Party, postmaster general and secretary of the Interior under Grover Cleveland and a US senator. 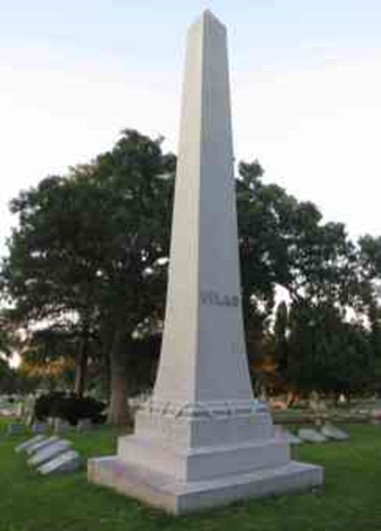 “Forest Hill Cemetery.” c. 1911. Wisconsin Historical Society Image 3497. In 1897 streetcar tracks were extended from downtown Madison to the entrance of Forest Hill. The cemetery office was originally constructed in 1908 as a streetcar station. 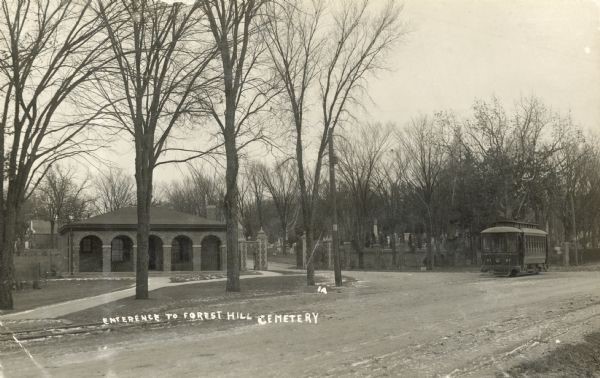 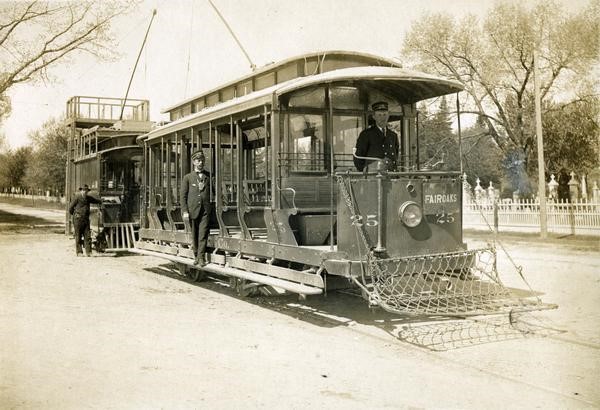 Tenney grave Daniel K. Tenney (1844-1915) was on of the first UW students and was admitted to the bar at 21. He founded a prestigious Chicago law firm. He retired in Madison and donated the land for Tenney Park. 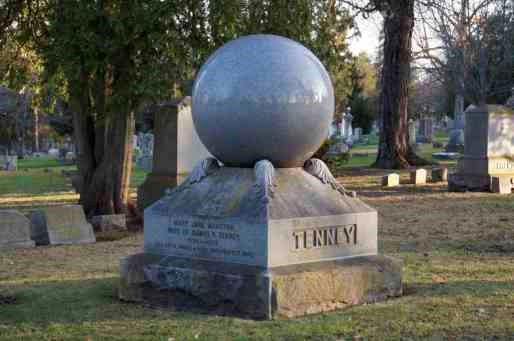 Darwin Clark grave Darwin Clark (1812-1899) was one of the original permanent settlers in Madison. He was on the crew that built the first Capitol. He was the head of the Cemetery Committee and helped lay out Forest Hill. 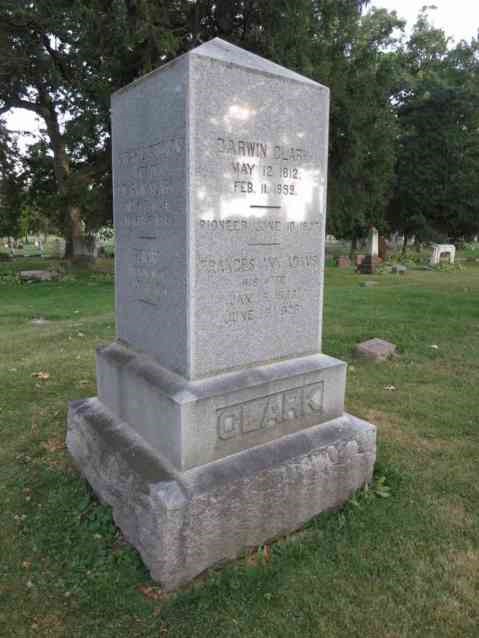 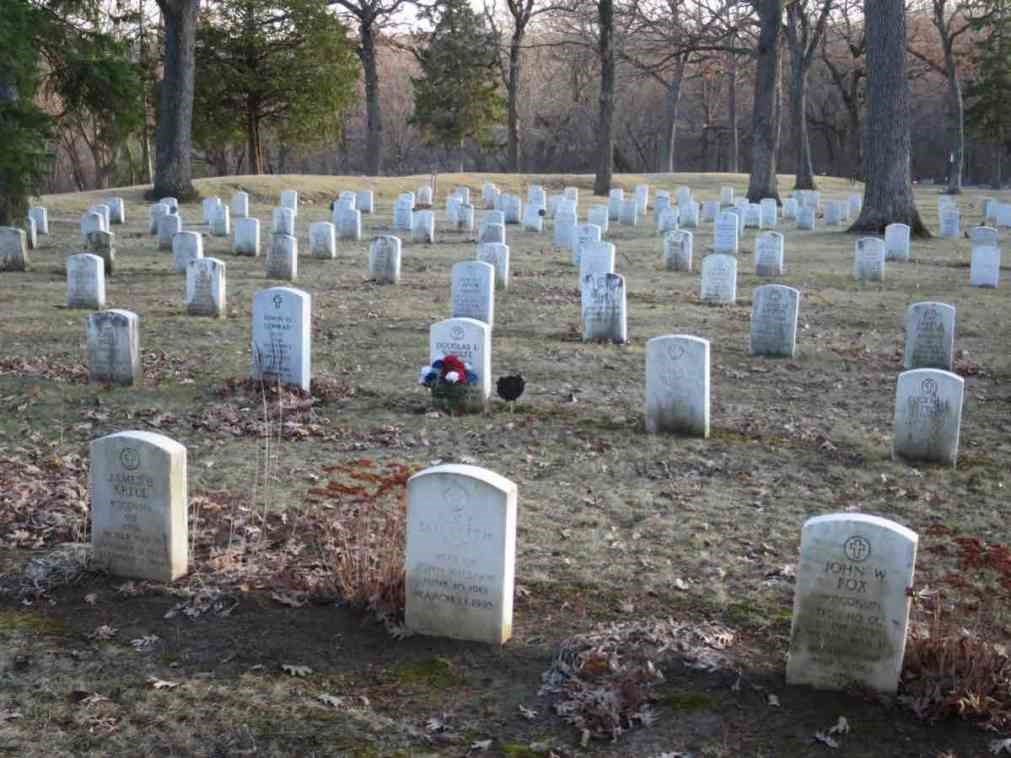 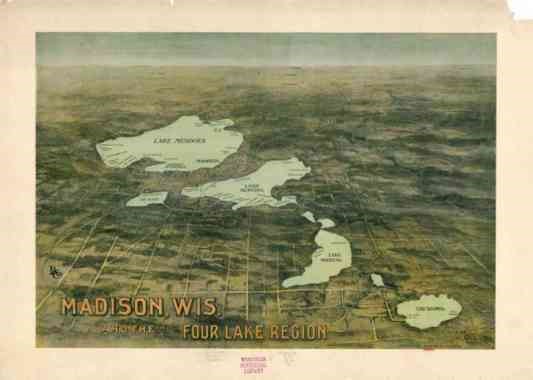 Goose Mound Located in Section 15 Goose mounds are often oriented toward water and likely represent the significance of water as a resource. The head of the Goose was destroyed in 1886 by grading for the Illinois Central Railway. 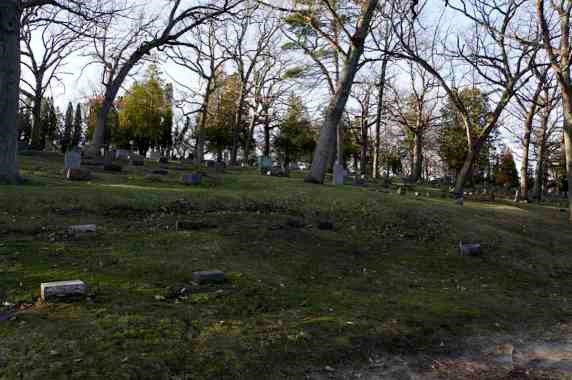 Water Spirit or Panther Mounds in Section 35 These mounds represent rebirth and renewal if near lakes and wetlands, and near spring-fed areas which are considered sacred and in some Native cultures represent a direct link to the underworld. 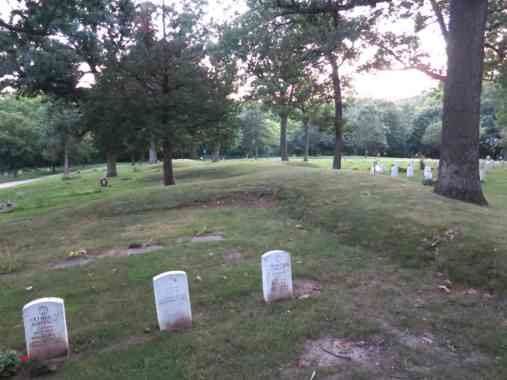 Slaughter Family Colonnade Stephen Slaughter (1860-1923) was a professor of Latin at the UW and author of essays on classical and Latin topics. His wife, Gertrude Elizabeth Taylor Slaughter (1870-1963) was a civic leader and scholar. 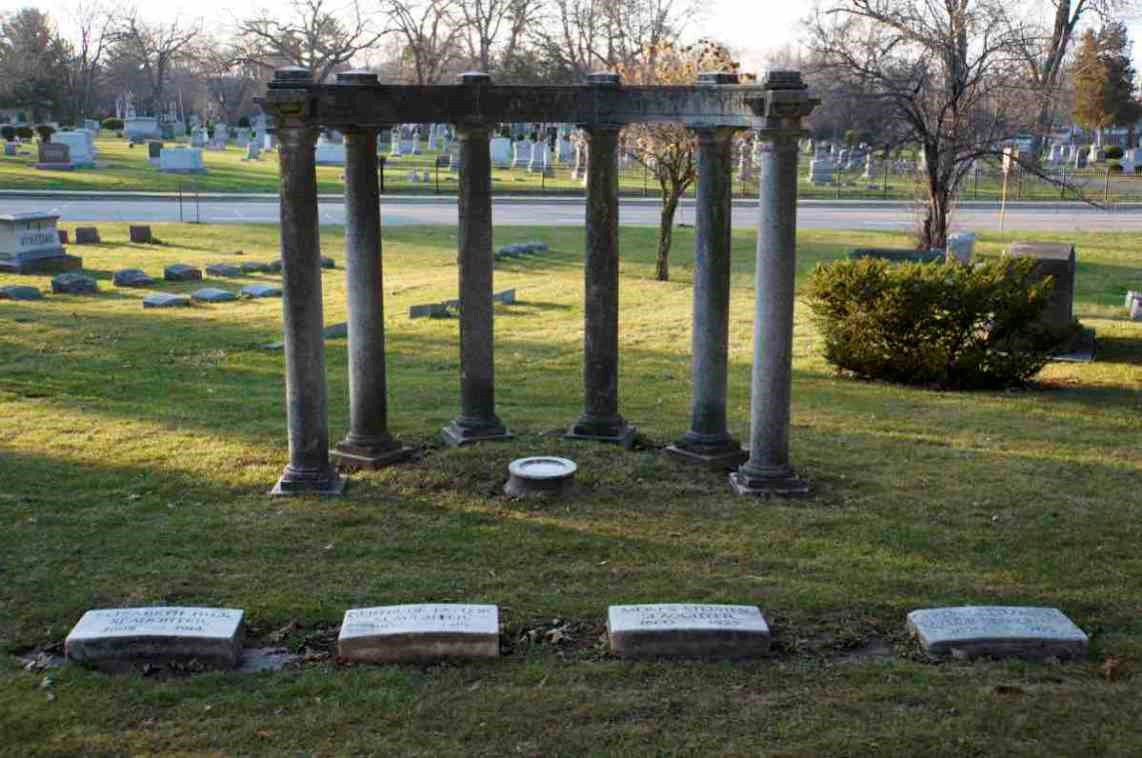 Jewish Graves, Section 10 This section is separate from the rest of the cemetery. This isolation may have its roots in Jewish folk superstition that believes if the graves or bodies are desecrated the souls of the dead will return as demons. 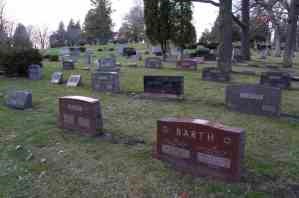 Samuel Klauber (1827-1887) and his wife Caroline in Section 10. Samuel and Caroline Klauber were the first Jewish residents in Madison. They ran a dry goods store. 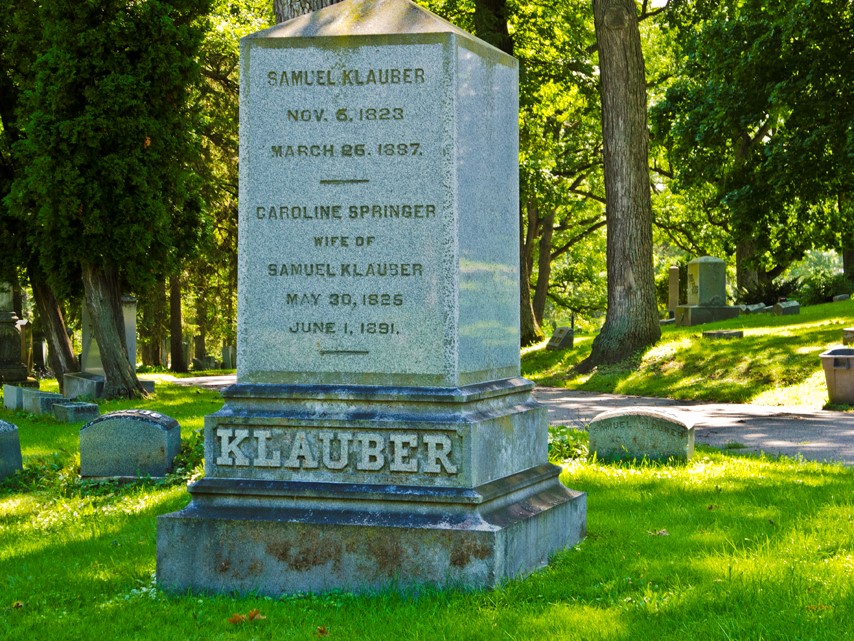 Khounxay Thao Apilate Daraphondeth grave (traditional Hmong) In Madison, a great number of the Hmong community came from Laos as refugees during the Vietnam war, and after the 1990’s some of the Hmong immigrants came from Vietnam and China 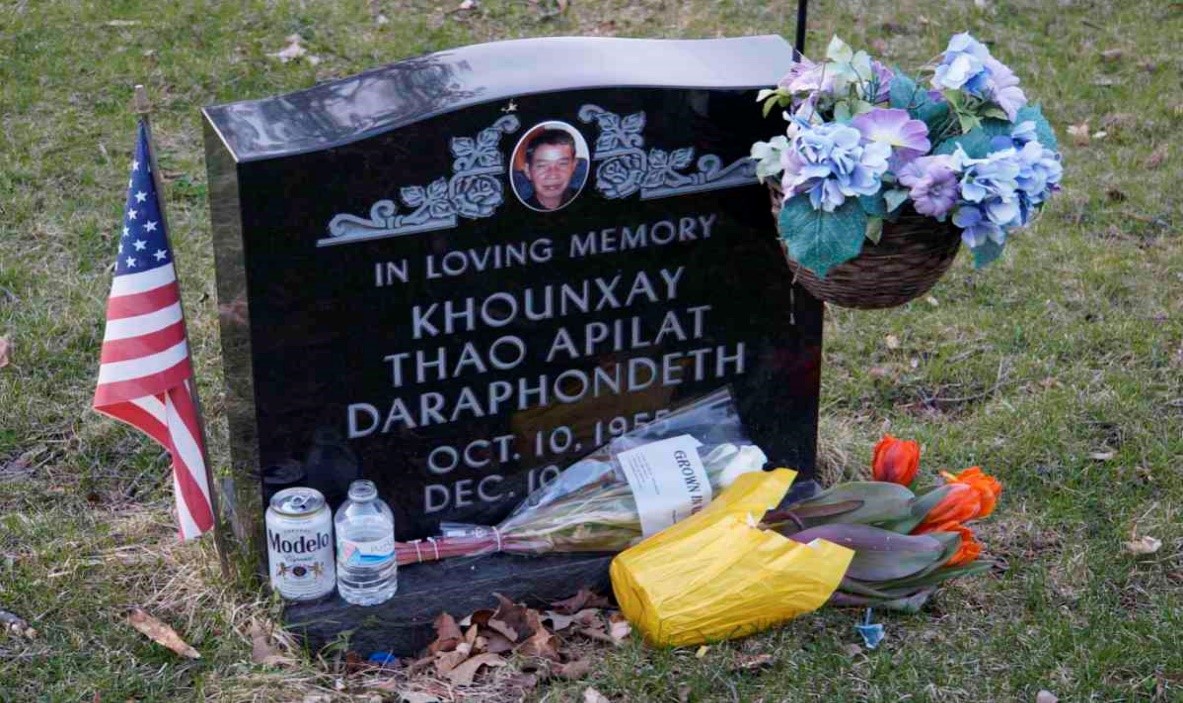 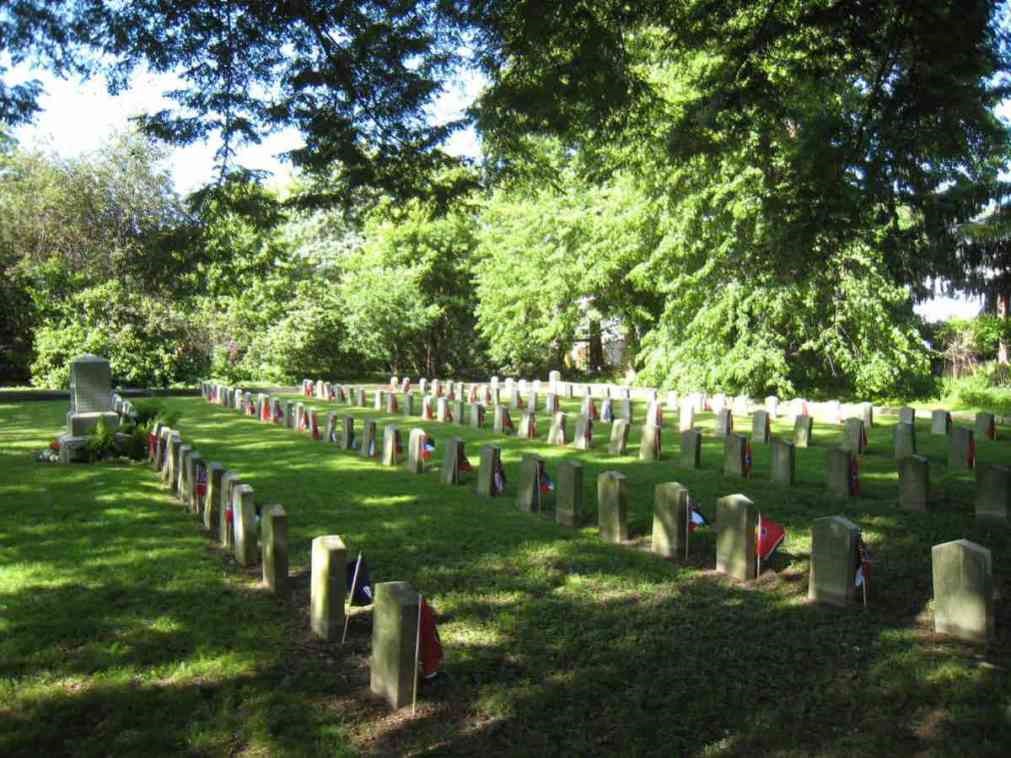 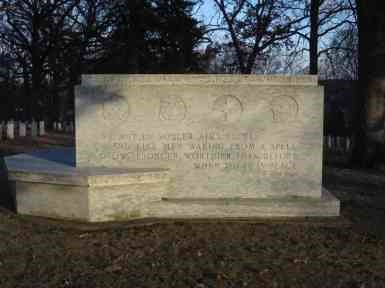 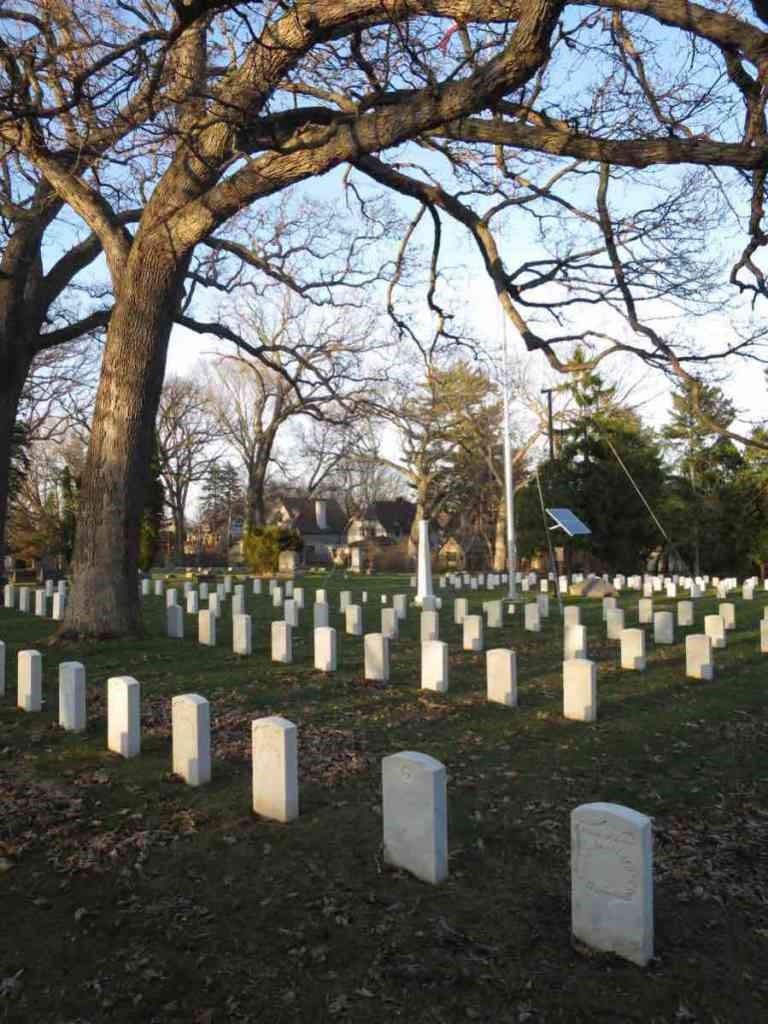 Grand Army of the Republic Memorial 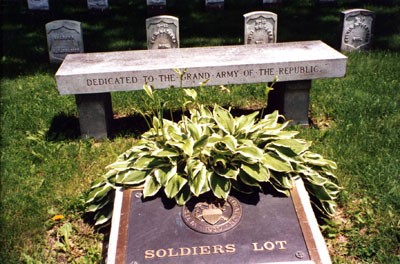 The Monument in Confederate’s Rest listing the names of the soldier’s buried there. This monument was ordered removed by the city council in 2017. 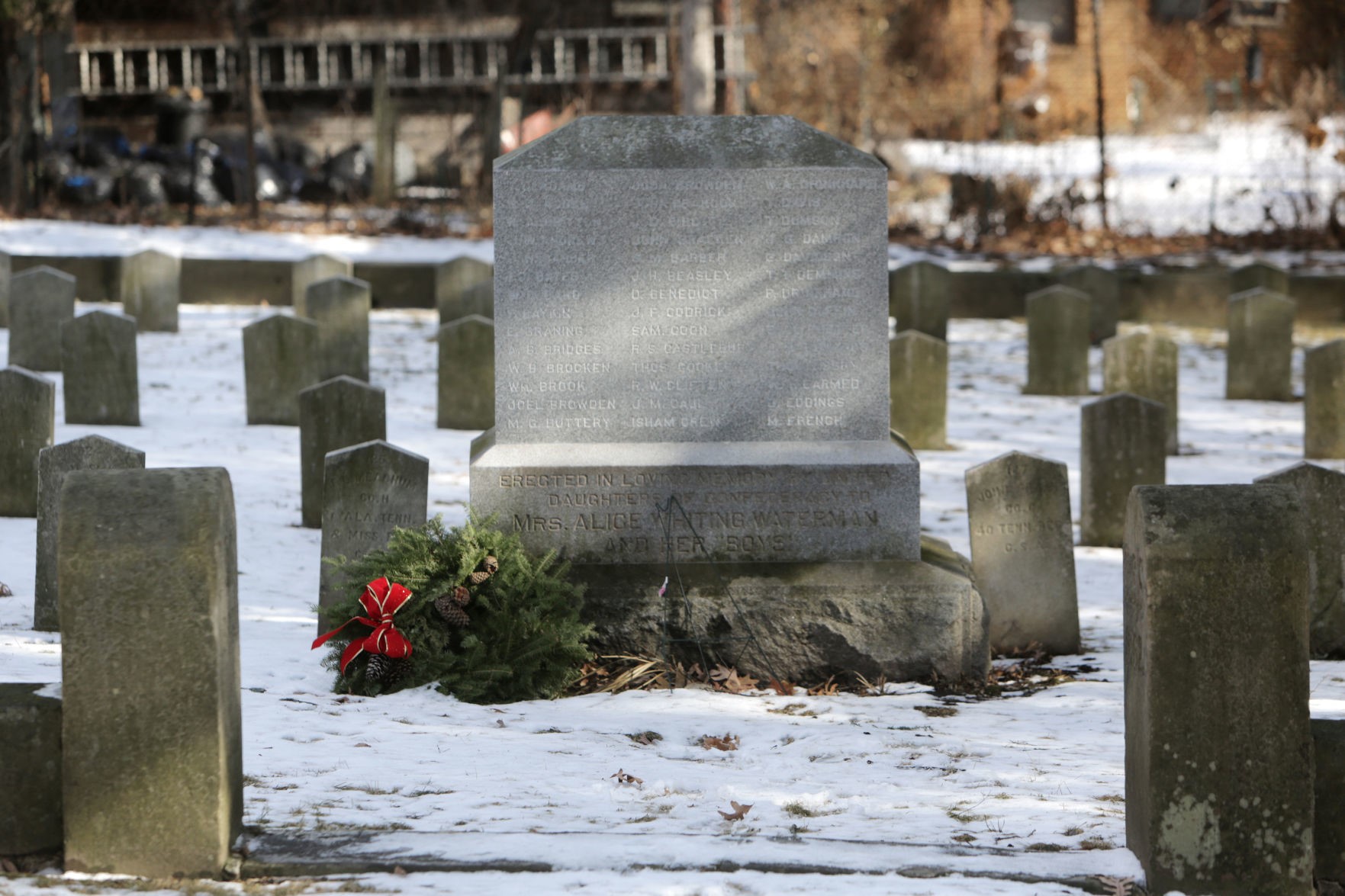 Plague in Confederate’s Rest commemorating Alice Whiting Waterman “Mrs. Waterman, being of Southern birth, took a very tender and touching interest in the plot occupied by 100 or more Confederate dead,” her obituary said. 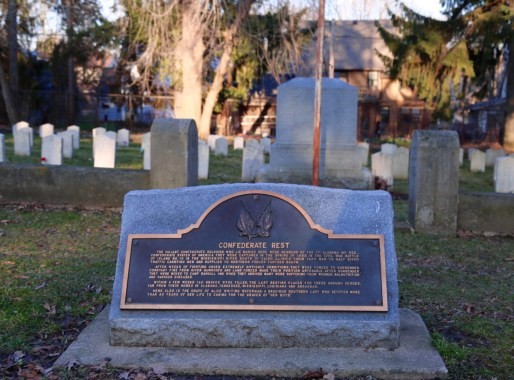 Forest Hill Cemetery contains the narratives of the history of the City of Madison and Wisconsin. In 1857, the city of Madison purchased the tract of land that would be established as the beautiful and idyllic Forest Hill Cemetery in 1858. The founders of Forrest Hill cemetery created in the tradition of rural cemeteries which emphasizes a picturesque garden aesthetic. Rural cemeteries were meant to be places of remembrance and reflection. They were meant to act as meditative spaces. Rural cemeteries were known for their curvy roads and natural landscapes that is meant to enhance the contemplative nature of the grounds. The founders succeeded in their vision. Forest Hill Cemetery is an exceptional rural cemetery with rolling hills, tall beautiful trees and winding paths. It is the perfect place to get lost in the silent history of Madison. The mayor, George B. Smith, described the location as “high and slightly, overlooking the entire city and surrounding lakes. No more appropriate place could be selected for the burial of the dead”. 1

Smith was not alone in his conclusion for long before Forest Hill became a cemetery, Natives built effigy mounds that are now contained on the Forest Hill cemetery grounds. These effigy mounds were built by Native Americans in the Late Woodland Period. The mounds are eternally sacred places, graves of ancestors, and connections to the land and supernatural. In addition to serving as burial sites, mounds served as ceremonial centers. What tribes were involved in the construction of the mounds remains a mystery, but it is thought that the Ho-Chunk Nation are descendants of the builders. The Forest Hill cemetery grounds once contained seven mounds: four linear mounds, two water spirits, one goose mound. Three of the linear mounds were destroyed to make room for new grave sites during the expansion of the cemetery after 1905. The mound grouping was likely built between 500 and 1000 A.D. Increase Lapham (1811-1875) and Charles E. Brown (1871-1946) devoted themselves to the research and preservation of the mounds. (Brown is a current resident of Forest Hill cemetery section 1).

The American Civil War had a profound impact on Wisconsin and Forest Hills. It touched virtually every family. At the time of the war, Forest Hill became a place for the community to gather in remembrance of their fallen loved ones. Between 1861 and 1865, more than 91,000 young soldiers left Wisconsin to fight in the South. They fought bravely in every major battle of the Civil War. More than 12,000 Wisconsin soldiers never returned home.8 Camp Randall, located in Madison, functioned as a military training base and hospital for Union soldiers as well as a prisoner-of-war camp for Confederate soldiers. Soldiers that died at Camp Randall or in general hospitals were interned in Forest Hills in the Union Soldier’s Lot in section 34. After the Civil War, Cordelia Harvey established Soldiers’ Orphan Home which took in children orphaned in the war. Eight children died there and are also interned in Union soldiers’ lot. At the center of Union Soldier’s Lot is a large granite boulder monument dedicated to the unknown dead by the Women’s Relief Corps No. 37 1891.

140 Confederate prisoners-of-war are also interned at Forest Hill in section 34 at Confederate’s Rest. The majority of these soldiers died while being held at Camp Randall. The soldiers were mostly taken prisoner after the battle of Island No. 10. This battle for navigational control of the Mississippi River occurred in February of 1862 and it marked the first time the Confederate Army lost a position on the Mississippi River in battle. Confederate’s Rest is the northernmost burial ground for Confederate soldiers. It is set apart in an isolated corner of the cemetery. Unlike Union Soldier’s Lot, it is not owned or maintained by the Department of Veteran Affairs or affiliated with them. Shortly, after the Civil War, Confederate’s Rest fell into a state of disrepair and neglect. A local woman, Alice Watermen, a Southern lady herself, tended lovingly to the graves calling them “her boys”. After her death, she was buried with “her boys” and is one of the only civilians to buried on military ground. Forest Hill also contains the graves of veterans from the Spanish-American War and later conflicts.

The cemetery also contains the graves of a myriad of Wisconsin politicians, business leaders and prominent citizens who impacted the city, state and nation. Among them are Louis and Cordelia Harvey. Louis was a state senator from 1854 to 1858, served as secretary of state from 1860 to 1862 and from January to April of 1962, he served as governor. After hearing of the tremendous losses suffered by the Union in the battle of Shiloh, he headed to Tennessee to help render aid to Wisconsin troops and drowned in the Tennessee River. His widow, Cordelia, took up his fight on behalf of the soldiers. She was visited soldier hospitals and studied the conditions. After seeing the deplorable conditions, she went to Washington to enlist Lincoln’s help. Eventually, he was persuaded to help, and the Harvey Hospital was founded. Later it would become the Soldiers’ Orphans Home. Forest Hill also contains the graves of one of the most important families Wisconsin history: the LaFollettes. Robert “Fighting Bob” LaFollette was a noted orator, member of Congress, Wisconsin governor and US senator. He was a national leader of the Progressive Party.

At the center [of the family] sat one woman, often overshadowed by her husband and sons, yet an influential reformer in her own right. Belle Case La Follette was a lawyer, journalist, editor, suffragist and counselor who provided much of the intellectual sophistication behind the Progressive Movement for which her husband was known. The first woman graduate of the University of Wisconsin law school, La Follette devoted much of her life to the cause of women's rights. 3

Belle exerted tremendous influence over Bob’s efforts at reform legislation. She was his assistant and researcher throughout his career as well as being a public orator rallying against state and federal laws that limited the position of women. There are several other graves contained within Forest Hill that carry recognizable names: Vilas who was a leader of the Wisconsin Democratic Party as well as a United States senator, Breese Stevens who was a lawyer, mayor and curator of the State Historical Society, Tenney who was one of the first UW students who went on to found a prestigious Chicago law firm and many more.