Harry Steenbock and the WARF

Prior to the understanding of vitamins doctors and scientists were researching a cure for the disease rickets- which causes soft, weak bones in children. It is now known that rickets usually occurs when the body does not receive enough Vitamin D, which helps growing bones absorb the minerals calcium and phosphorous. Scientists were conducting studies on home remedies for rickets such as exposure to sunlight, milk, and cod liver oil. When Harry Steenbock began his experiments that would contribute to this research, the science community was determining what element in various treatments was causing the change in the sick patients. 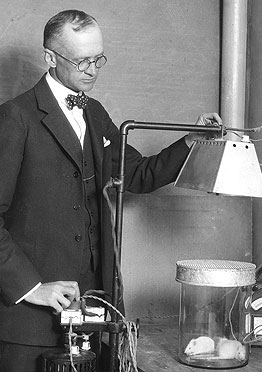 Harry Steenbock (1886-1967), a biochemist at the University of Wisconsin-Madison, conducted experiments in his lab that helped understand and discover Vitamin D. He exposed rats to ultra-violet radiation rays and found that the radiation positively affected rats with rickets which causes weak and brittle bones. In order to figure out what the radiation was doing, Steenbock continued with his observations and found that the activated factor produced by irradiation of the animal was the same or similar to factors present in a known cure of rickets- cod liver oil. In the 1920’s Harry Steenbock had discovered an element that would later become known as Vitamin D. By identifying the element that can cure rickets, this element therefore could now be added to manufactured foods- a process called fortification- to increase the nutritional value.

Harry Steenbock took control over his invention by patenting his discovery. He wanted to prevent the public from flawed preparations that could arise from private businesses and corporations taking and using his ideas. In 1945 he established the Wisconsin Alumni Research Foundation (WARF) at the University of Wisconsin Madison to patent discoveries at the university to protect the intellectual property of the faculty working there. At a cost of $900 the foundation was established and in 1928 Harry Steenbock’s discovery was patented and owned by the University. By selling the patent rights of Steenbock’s, and later other faculty researcher’s discoveries to outside corporations, such as Quaker Oats, WARF has been able to give over $900 million dollars to the university.