Resurrection Cemetery, located in Justice, Illinois, is both a sterling example of the history of the growth of the communities in the Chicagoland area in the late 19th cemetery and of how a places can become legendary in ways never intended by their original planners. The cemetery was founded as part of growing need for cemeteries in the Chicago area. However, within thirty years of its life would become part of one of the best known ghost stories in the United States; the story of Resurrection Mary. Resurrection Mary, a ghostly woman who would be picked up hitchhiking or would ask a young man for a ride home and then disappear from the car as they passed Resurrection Cemetery, has become the subject of television shows, movies , radio dramas, and podcasts. 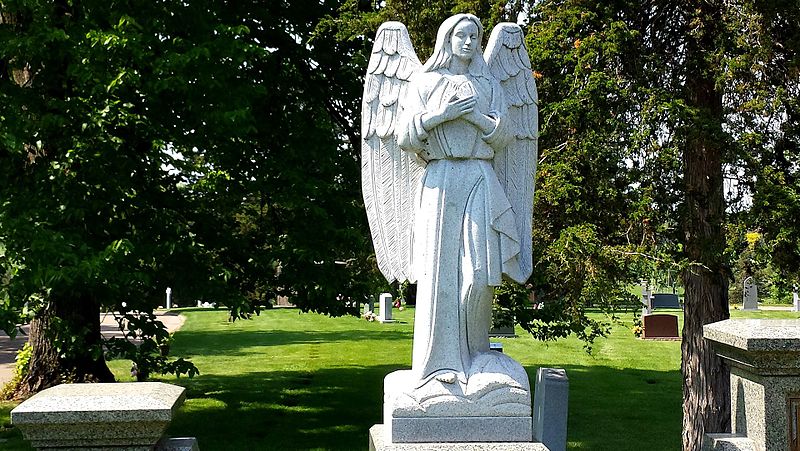 Resurrection Cemetery in Justice, IL is an interesting historical landmark and is home to one of the most enduring and well-known legends in the United States. In many ways, Justice, IL owes its very existence to Resurrection Cemetery and its sister cemetery, Bethania Cemetery. Justice grew up along Archer Avenue, one of the oldest and most traveled roads around Chicago but was only a few small businesses and homes before it was decided that due to the shortage of cemetery space in Chicago proper that they could create cemeteries along Archer Road. Bethania and Resurrection Cemeteries were built in 1894 and 1904, respectively, to help deal with this rising need in the Justice area for cemeteries. These cemeteries, some of the first in the area, resulted in a variety of growth for Justice as people moved to Justice to be closer to the cemeteries where their loved ones were interred and businesses began popping up to cater to the cemetery visitors.1

No resident of Resurrection Cemetery is as famous (or infamous) as Resurrection Cemetery’s resident ghost, Resurrection Mary. The legend of Resurrection Mary has been circulating around the Chicagoland since at least the 1930s. According to the most famous version of the legend, a young man would meet a young woman while dancing or out at a bar and after a night of dancing, he would offer her a ride home. She would direct the young man to begin driving her down Archer Road but upon nearing Resurrection Cemetery would the woman would urge the man to stop and let her out. Typically letting her out would be met with a strange response from the woman such as, “You can leave. You cannot follow me here,” and then she would vanish before the young man’s eyes. This story has taken on a life of its own in Chicago and Resurrection Mary has in some ways become a treasured part of the culture of the city. It is still common for young people to drive a long Archer Road, late at night, looking for an opportunity to see the cemetery’s most famous resident.2

Resurrection Cemetery, and its resident ghost, have become more than just one of the many cemeteries in the Chicagoland area. It’s ascended to the realm of legend and has become a site not only visited by those visiting their departed loved ones but also one visited for its place in the annals of the United States’ haunted history.

Created by Jordan Sprunger (Instructed by Catherine Smith, University of Wisconsin-Madison) on December 7th 2018, 11:32:44 am.