In 1975, Howard Temin, along with Renato Dulbecco, and David Baltimore, won the Nobel Prize in Physiology or Medicine for the discovery of reverse transcriptase. Temin was recruited to work at the McArdle Laboratory for Cancer Research at UW-Madison in 1959. In 1970, Temin found verifiable evidence to prove his theory that retroviruses have reverse transcriptases, enzymes that allow creation of DNA in an infected cell through the RNA in the virus. This was a huge breakthrough in virology as it changed the field’s understanding of how viruses replicate by refuting the current belief that genetic information could only transfer from DNA to RNA and not the inverse. Temin’s discovery has had implications in the treatment of both cancer and HIV. 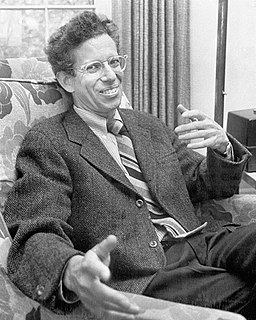 Temin attended graduate school at the California Institute of Technology where he worked with Dulbecco, the man with whom he would later share the Nobel Prize. After receiving his degree, Temin joined the McArdle Lab at the University of Wisconsin-Madison. There he began trying to prove the theory he put forth in his pre-doctorate work that posited that viruses are able to change the genetic makeup of cells. To prove his theory, Temin completed a number of experiments including inhibiting the creation of RNA in viruses to try to determine how the virus was replicating as well as dabbling in the recently developed technique of molecular hybridization. Results from those experiments continued to bolster his theory but weren’t enough to provide irrefutable proof that his theory was correct.

Temin then worked with Satoshi Mizutani, a postdoctoral fellow who had recently joined the lab, to prove that the reverse transcriptase enzyme actually already existed in the virus before the cell was infected. Temin presented the results of this experiment in 1970 at the Tenth International Cancer Congress in Houston. After the presentation, he received a call from David Baltimore, a researcher at MIT, who was publishing his own research that proved the same concept. Both Temin and Baltimore had their research published in the same issue of Nature on June 27th, 1970.

After winning the Nobel Prize, Temin continued to study retroviruses, looking into specifically how these viruses replicate. Along with this research, he taught and mentored many students on campus in his tenure at the UW and served on the National Cancer Advisory Board.  Howard Temin passed away on February 9th, 1994. His research has left a lasting impact on the fields of Molecular Biology and Oncology and has acted as a foundation for many researchers in those fields who have come after him.

Created by Jennifer Donahoe (Instructed by Catherine Smith, University of Wisconsin-Madison) on December 7th 2018, 12:00:28 am.

Last updated by Jennifer Donahoe (Instructed by Catherine Smith, University of Wisconsin-Madison) on December 7th 2018, 12:02:11 am.