Fred and Mike Tribble were arrested for fishing with spears on Chief Lake in 1974. The incident provided a test case that would ultimately restore Ojibwe fishing, hunting, and wild rice gathering rights. State conservation laws were being enforced against tribal members in violation of treaties signed in 1837 and 1842 between Ojibwe tribes and the United States. The treaties ceded lands to the United States, but Ojibwe bands retained rights to fish, hunt, and gather wild rice on the ceded territory. 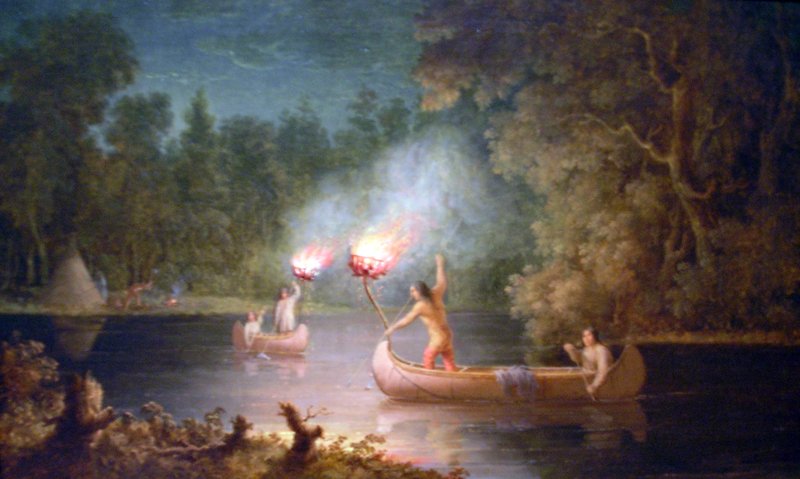 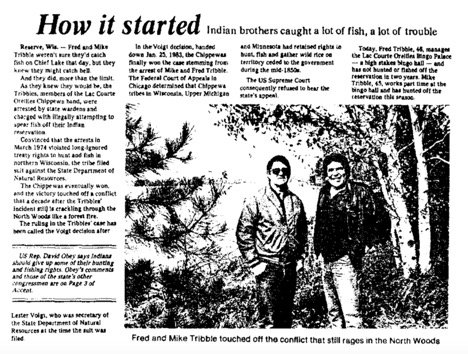 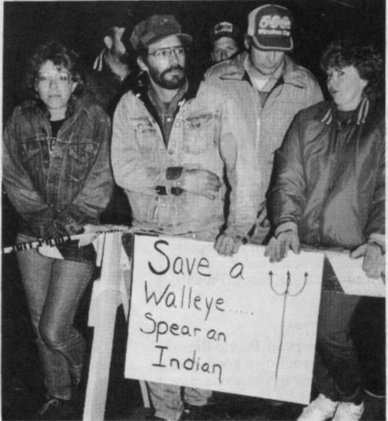 Fred and Mike Tribble were two Ojibwe brothers from the Lac de Oreilles reservation in the Chief Lake area of Wisconsin. The brothers learned in a college class instructed by Larry Leventhal at the College of St. Scholastica in Duluth, Minnesota that treaties signed in 1837 and 1842 between Lake Superior Ojibwe tribes and the United States should preserve rights to hunt and fish on ceded territory. Despite these treaty rights, tribal members were frequently arrested for fishing and hunting on land off the reservation. Leventhal was an attorney who had previously provided legal counsel to figures in the American Indian Movement.  He told the brothers that a test case was needed to challenge these rights in court.1 The 1837 treaty guaranteed the “privilege of hunting, fishing, and gathering wild rice, upon the lands, the rivers and the lakes included in the territory ceded.”  Similarly, the 1842 treaty stipulated “the right of hunting on the ceded territory.”2

Fred and Mike Tribble provided a test case when they were arrested on March 8, 1974 on the ice of Chief Lake. They were charged by game wardens from the Wisconsin Department of Natural Resources with possessing a spear for harvesting fish off reservation lands and occupying an unregistered ice shack.3 Fred Tribble had contacted the sheriff of Sawyer County the night before the incident to notify authorities that the brothers were planning to fish off the Lac de Oreilles reservation. During their arrest, the brothers produced copies of treaties and asserted their sovereign rights.4

The Ojibwe Tribe of Lac Courte Oreilles sued the state of Wisconsin in federal court four days after the Tribble brothers were arrested on Chief Lake. The lawsuit sought to end the enforcement of fishing and hunting laws against tribal members. The tribe argued that the 1837 and 1842 treaties created reserved rights to gather, fish, and hunt on ceded land outside of the reservation. The case would not be decided until 1978 when Judge Doyle ruled that the tribe no longer reserved these rights after signing the Treaty of 1854 that established their reservation. This ruling was appealed and overturned in 1983 in what became known as the Voigt decision. The Voigt decision restored hunting and gathering rights on ceded lands outside of reservations.5 The decision also restored tribal rights to use the traditional method of using a spear for harvesting fish. These rights were restored to the Lac Courte Oreilles as well as the other five Ojibwe bands who signed the treaties in 1837 and 1842. These signatories included the bands from St. Croix, Red Cliff, Lac du Flambeau, Bad River, and Mole Lake. The scope of the rights and limits on harvest counts were not fully resolved by lower courts until 1991. The scope was limited to waters on ceded land that could be accessed publicly, and limits were placed on the number of fish that could be harvested to maintain healthy populations.6

The test case provided by the Tribble brothers that led to the restoration of spearfishing rights on ceded territory through the Voigt decision was met with violent and racial protests. The anti-spearing sentiment was exacerbated by local media across Wisconsin who printed stories that were critical of the practice and fueled anti-treaty sentiment.7 Protesters argued that Ojibwe spearfishers would decimate the walleye population and reduce tourism across lakes in the northern region of Wisconsin. Initially, there was a misconception that the Ojibwe would be able to harvest fish without limits. The Great Lakes Indian Fish and Wildlife Commission (GLIFWC) was created and voluntarily imposed restrictions on the number of walleye that could be taken while lower courts decided legal standards to maintain fish populations. The protestors would harass Ojibwe spearfishers as they entered lakes across Wisconsin. The protests would end in 1991 when groups were threatened with prosecution under statutes protecting civil rights at the federal level.8  Professor of First Nations Studies at the University of Wisconsin-Green Bay JP Leary notes that the misconceptions surrounding the protests led educational and activist groups “to advocate for a school-based solution to the fear, ignorance, and violence surrounding the exercise of treaty rights, arguing that schools must be involved in any policy solution because failures in curriculum policy had contributed to the situation.”  This would lead to Act 31 being passed in 1989 requiring public schools in Wisconsin to teach tribal rights and culture.9

Ultimately, the arrests of the Tribble brothers were important in the restoration of rights for the Ojibwe signatories of the treaties signed in 1837 and 1842. Their actions led to the renewal of important cultural practices for Ojibwe members. Additionally, their actions are an important moment in the larger struggle for civil rights within the American Indian Movement.