Named in honor of John Henry Murphy Sr., the publisher of the Baltimore Afro-American, this women's dorm was dedicated in the spring of 1943. The building was financed following a deadly fire in 1941 destroyed an academic building and white lawmakers appropriated $100,000 to replace the building which they assumed was a dormitory. The building is part of the Academic Oval at the University of Maryland Eastern Shore, a historically black university located in the eastern part of Maryland.

Murphy Hall was completed in 1943 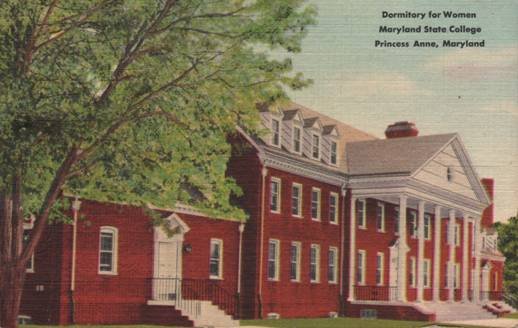 University of Maryland Eastern Shore, otherwise known as UMES, dates back to a school established in September of 1886 by the Delaware Conference of the Methodist Episcopal Church. Portia and Benjamin Bird established the school which operated under the name Morgan College. Towards the end of the first year, the school had grown to 37 students.

The school was known as Princess Anne Academy for many years before the formal name change fro Morgan College to the "Eastern Shore Branch of Maryland Agriculture College" prior to becoming a state institution. The institution became "Maryland State College" in 1948 and  "University of Maryland Eastern Shore" in 1970.