The Beckley First Baptist Church is one of the oldest congregations in the Beckley community. It was established as the Raleigh Baptist Church of Christ in 1850 by the Greenbrier Baptist Association, at the request of Coal Marsh Church. Services were originally held in a log building on Heber Street which was later destroyed during the Civil War. The current church property was purchased in 1893 and has been the site of three different sanctuaries. The first, a wood frame structure, burned in 1904. A brick building replaced it in 1918 but soon became too small for the church's needs. The final building was constructed in 1929 and remains in use to this day. It is listed on the National Register of Historic Places as part of the Beckley Courthouse Square Historic District.

The current sanctuary was built in 1929 and features a four-story bell tower. Image obtained from the Beckley First Baptist Church. 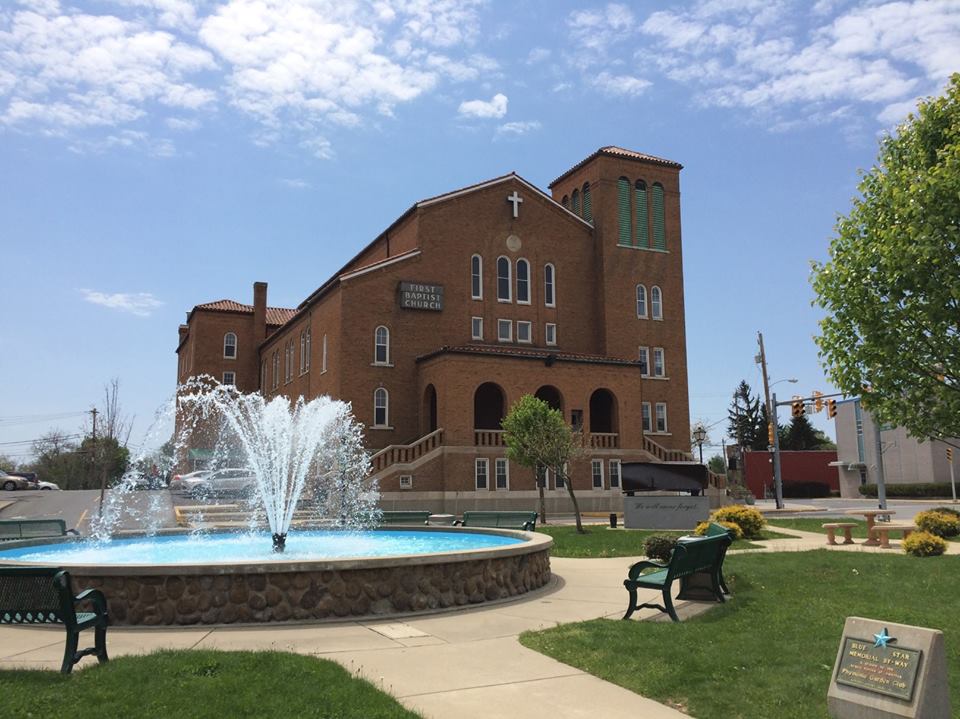 Depiction of a frame church building, likely the one built around 1893. Image obtained from the Florida Baptist Historical Society. 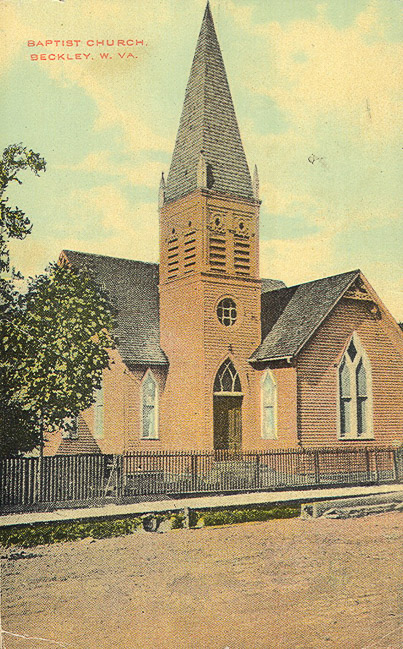 The first brick church was built in 1918 but soon proved too small for the growing congregation. Image obtained from the Florida Baptist Historical Society. 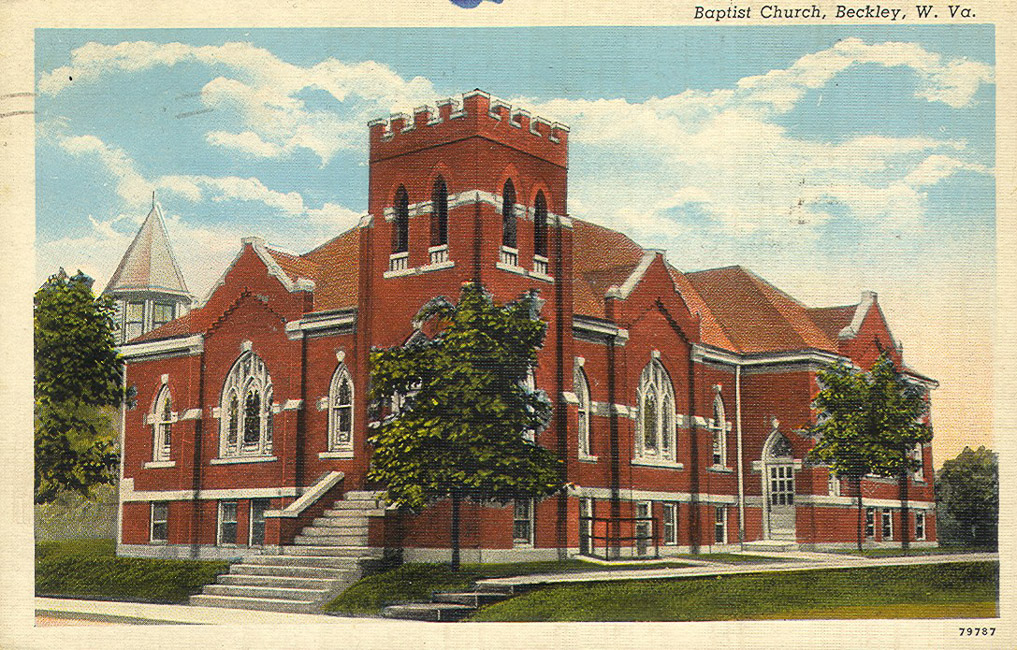 The current building shortly after its completion in 1929. Image obtained from the Florida Baptist Historical Society. 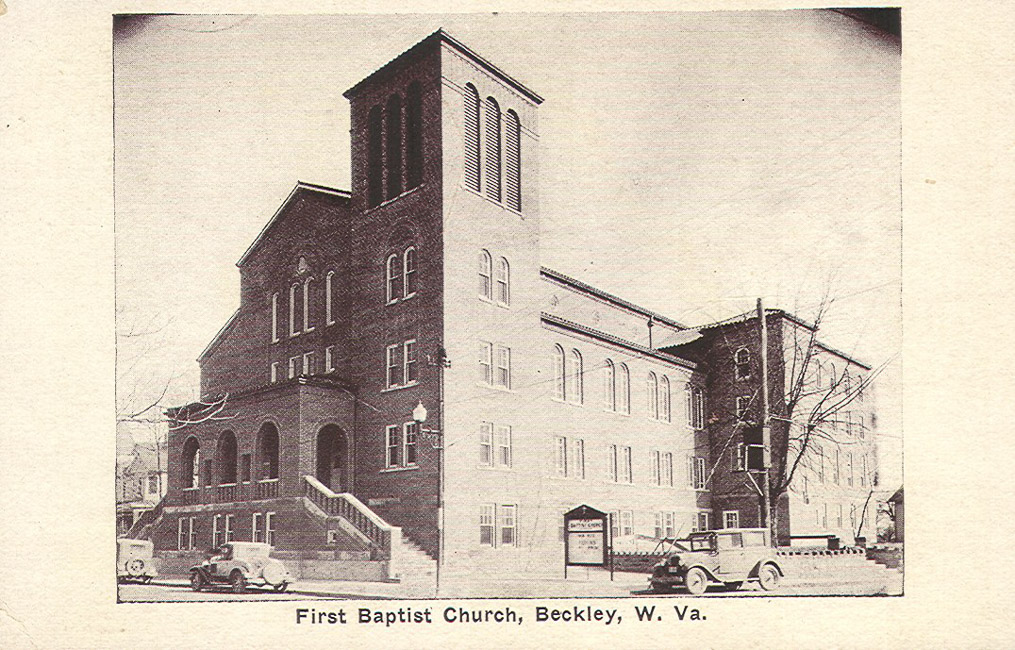 The Raleigh Baptist Church of Christ (later renamed the First Baptist Church of Beckley) was formally established in November, 1850 with a meeting at the Raleigh County Courthouse. It was organized by the Greenbrier Baptist Association and the Coal Marsh Church, which felt that a Baptist church was needed in the Beckley area. Four men participated in the creation of the church: M. T. Bibb, M. Bibb, William P. Walker, and Rev. Matthew Ellison. There were also fifteen charter members, including the Bailey, Tyree, Shumate, and Hutchinson families. Matthew Ellison was pastor of the Coal Marsh Church and was largely responsible for pushing for the creation of the First Baptist Church. He was soon chosen to be its first pastor; Ellison frequently acted as the pastor for multiple congregations and at one point presided over nine separate churches. He would serve as the pastor for the First Baptist Church until 1879.

The congregation originally met in a 24 by 36 foot log structure on Heber Street. During the Civil War it was disbanded, and reportedly destroyed by Union troops; some sources say it was burned down in 1863. In May 1865, Rev. Ellison worked to resurrect the church; meetings resumed, but it is uncertain where they were held. In April 1893, church trustees purchased a lot on Neville Street and built a wood frame sanctuary. This was destroyed in a fire around 1904. The church’s first brick sanctuary was constructed on the same site in 1918; that same year it served as a makeshift hospital during the Spanish Influenza.

Church membership rose steadily in the 1920s and soon outgrew the sanctuary. In 1929, it was demolished and work began on a new building on the same spot. The red brick, three-story church building included a pipe organ and a four-story bell tower. It cost around $200,000 and was dedicated on January 12, 1930. This building continues to be used to the present day, and has undergone a number of renovations and expansions over the years. In 1994 it was included on the National Register of Historic Places as part of the Beckley Courthouse Square Historic District. As one of the oldest churches in Beckley, the First Baptist Church remains an integral part of the local community. It is known for its charitable programs, such as a Backpack ministry to provide supplies to students and a Helping Hands ministry giving clothes and food to residents in need. Sermons are broadcasted live over the radio every Sunday.