Built in 1852, this 25-room home contains stenciled and hand painted ceilings, parquet flooring, and stained-glass windows purchased at the 1893 Chicago World's Fair. The Mallory-Neely House is the only historic property in Memphis to retain most of its original furnishings. It is a contributing property of the Victorian Village Historic District, which is listed on the National Register of Historic Places.

The Mallory-Neely House is open to the public once again. 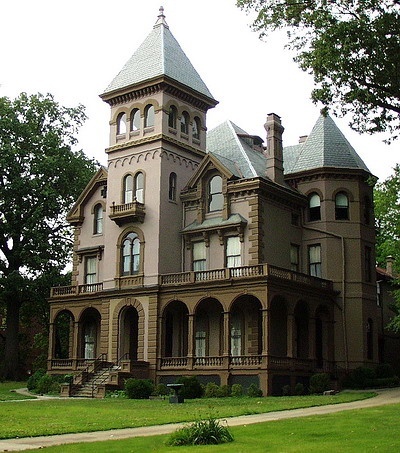 Isaac and Lucy Kirtland bought the property in 1852 and built the two-story home for their family. In 1883 Columbus and Frances Neely bought the house and moved in with their five children. The Neely’s made significant changes, adding a third floor with an additional level for the tower and were responsible for the magnificent period interiors we still see today. The décor and furnishings date to circa 1890 and include pieces the family bought at the World’s Columbian Exposition in Chicago in 1893 and later from the St. Louis World’s Fair in 1904.

It was preserved in this pristine manner by Mrs. Frances Neely Mallory, also known affectionately throughout her life as Miss Daisy, who moved into the house with her parents as a child and was the last family member to reside there until her death in 1969. On the 1970s the Mallory Family gave the house and contents to the DAR/SAR/CAR who opened it as a house museum. They gifted it to the City in 1985 and it has been a facet of the Pink Palace Family of Museums and operated as a historic house museum since 1987.