This statue in Jawbone Park portrays the Delaware chieftain Buckongahelas and his son Mahonegon, two significant historical figures of the 18th century in this region. Buckongahelas (1725-1805) was a respected military leader who fought against American settlers during the Revolutionary War. He is also considered by some to be the namesake of the community of Buckhannon. According to legend, Buckongahelas was living in the area when his son Mahonegon was murdered by Captain William White which led to a series of violent conflicts between Natives and settlers in the Buckhannon area. This statue, created in 2000 by Ross Straight, depicts Buckongahelas holding the dying Mahonegon in his arms. It is one of only two statues that honor Native Americans in West Virginia.

The 650-pound monument consists of a bronze sculpture sitting on a chiseled rock. It was installed in Buckhannon's Jawbone Park in 2000. Image obtained from the Mountain Arts District. 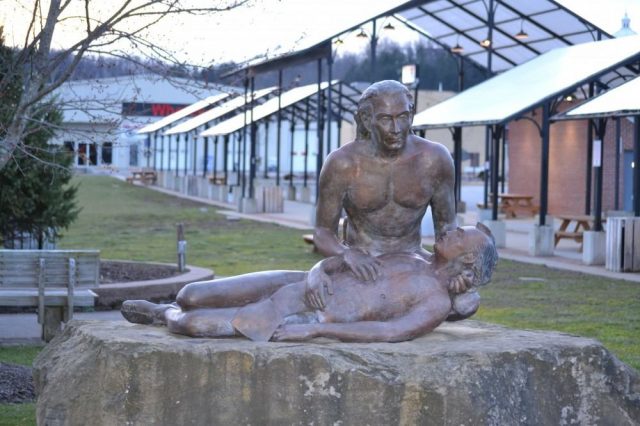 Designed by popular local artist Ross Straight, the sculpture depicts Buckongahelas holding his son Mahonegon, who is dying from a bullet wound to the abdomen. Image obtained from Ross Straight, Artist website. 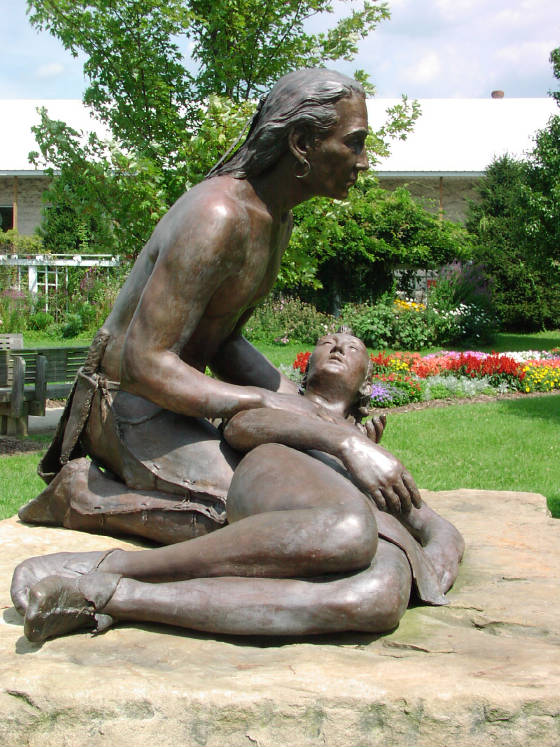 Buckongahelas was born in Delaware sometime around 1725. Little is known about his life, but he eventually became a chieftain and a respected warrior. Buckongahelas was a member of the Delaware tribe, also known as the Lenni Lenape. They originally lived along the Delaware River in New Jersey, Delaware, Pennsylvania, and New York. Growing pressure from the European colonies caused them to begin migrating further west. Buckongahelas and some of the Delaware were believed to be living in the Buckhannon area in the 1770s. It was here, according to legend, in June 1773 that his son Mahonegon was shot and killed by a settler named Captain William White. This incident allegedly started a series of conflicts between Native Americans and European settlers in the Upshur County area. Supposedly Buckongahelas exacted his revenge by finding and killing White around a decade later.

Buckongahelas and many of the Delaware sided with the British during the American Revolution and attacked a number of frontier settlements. In 1777 he participated in the Siege of Fort Henry in Wheeling. Supposedly Buckongahelas was such a powerful military leader that he was nicknamed the Washington of the Delaware. After the war, he left western Virginia and migrated with the Delaware further west, first to Ohio, then finally settled in Indiana. He signed the 1795 Treaty of Greenville, the 1803 Fort Wayne Treaty, and the 1804 Vincennes Treaty. Buckongahelas died in May 1805. He later became popularized in West Virginia with the publication of The Scout of the Buckongehanon by J. C. McWhorter in 1927. It was commonly believed that Buckongahelas was the namesake for the Buckhannon River, and subsequently the town of Buckhannon. However, most local historians believe the name came from an Augusta County officer of Scottish origin named Colonel John Buchanan.

The story of Buckongahelas and the murder of his son Mahonegon became a popular legend in the town of Buckhannon. In the late 1990s, a local artist named Ross Straight was inspired by the tale and sought to create a monument to it. He personally raised the $21,500 needed to build the statue and even took welding classes at the Fred Eberle Technical Center to learn the skills he needed. The statue, named “Buckongahelas and his Son Mahonegon,” was installed in Buckhannon’s Jawbone Park in 2000. It was dedicated in a ceremony attended by representatives from three Native American tribes, including the Delaware. The 650-pound bronze statue depicts Buckongahelas cradling the dying Mahonegon in arms, and sits atop a chiseled rock. The monument is one of the most well known of Straight’s works, and is one of only two Native American statues in West Virginia.