Ave Maria Grotto, in Cullman,Alabama, is a landscaped 4 acre park in and old quart on the grounds of St. Bernard Abbey, providing a garden setting for 125 miniature reproductions of some of the most famous religious structures of the world. This was added to the Alabama Register of Landmarks and Heritage on February 24, 1976, and to the National Register of Historic Places on January 19, 1984. The stone and concrete models are the work of Brother Joseph Zoettl, a benedictine monk of St. Benard's, who devoted some 50 years to the project and the last three decades from 1932-1961 without any interruption. The incorporate discarded building supplies, bricks, marbles, tiles, pipes, sea shells, plastic animals, costume jewelry, toilet bowl floats and cold cream jars.The masterpieces of stone and concrete are the work of Brother Joseph Zoettl, who is a Benedictine monk of St. Bernard Abbey. He stated all of this began as a hobby especially because of all the materials he found and had all the patience in the world, so that is when he created the greatest edifices of all time.

A Saint Barnard Abbey monk built these miniatures of Jerusalem, Rome, and biblical scenes from 1932 to 1961. 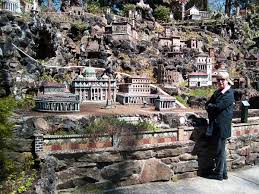 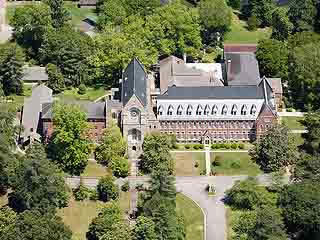 The Ave Maria Grotto in Cullman, has been on the National Register of Historic Places for 30 years. Located on the grounds of St. Bernard Abbey, it contains replicas of more than 100 of the world’s famous shrines, holy sites, and houses of worship. 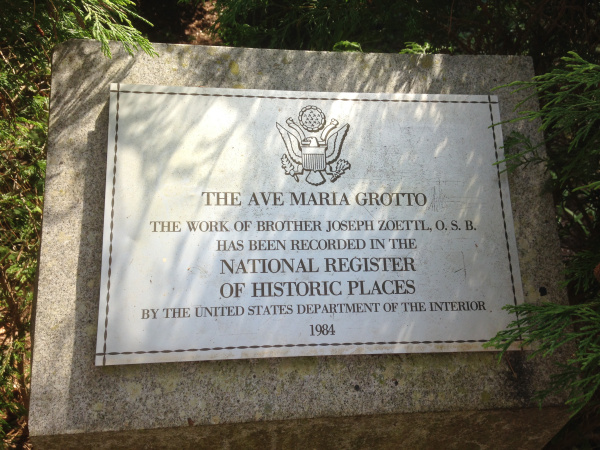 Brother Joseph also built replicas memorializing St. Bernard’s students — called “St. Bernard Boys” — who had been killed during war. The photo below shows a replica of a Benedictine monastery in Korea that was destroyed by Communists. The three crosses 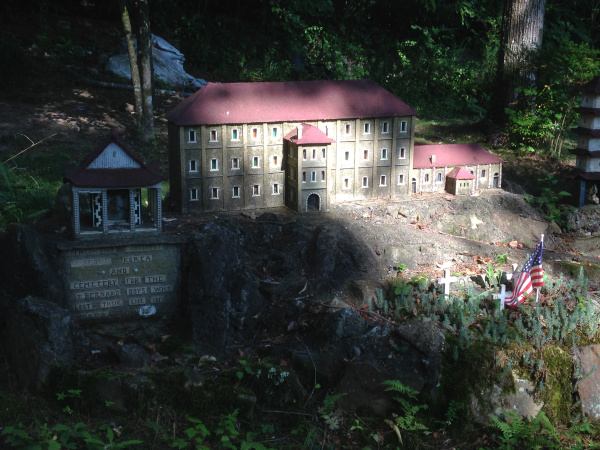 Brother Joseph was born in 1878, and almost died in a flu that was in Europe in 1891. Joseph describes that he and his father worked in the brewery that settled only for glass of cider to mark for the occasion. Many people didn't know this about Brother Joseph but he as a monk served asa housekeeper for priests in a lot of their missions. Again a note of interest one of his priest associates, Brother Joseph was later to write he called my cooking poison, he would also examine the coal ashes to see how much coal was in there, then he would call me down. Such menages we can assume took place in Tuscumbia and Decatur, Alabama, Dayton, Tennessee, Pocahontas and Stonega, Virginia. After his house keeping career he was brought to the Abbey and was put in charge of a powerhouse that was built in 1911.

When it came to working hard he had very long tiring days such a 17 hours, hardly had any time to get to Sunday Mass and for 30 years this was his routine. To pass the time he started hobbies again which happen to be he constructed a church that is still in existence then years later he began with some small oriental buildings which were later called Jerusalem.Brother Joseph's own words suggest that some of his monastic brethren saw something of the future in his early work. Father Lawrence O'Leary, the guestmaster, took all visitors out to see it, and then another presage of the future but by and by other people came and it became a real nuisance which could not be stopped anymore. And another early development, One day Father Dominic downs came to me with some little statues and to see if I could make small grottoes. He had a store in front of the college and sold religious articles to help missions.

In 1932 he was to build a grotto of size and dimensions as to outdo anything he has ever dreamed of after making five thousand small grottos for sale he commenced work on what is now Ave Maria Grotto. On May 17th 1934 the Ave Maria Grotto was dedicated and Brother Joseph continued his work for over 40 years using all these materials sent from all over the world,where he built his last model, the Basilica in Lourdes, at the age of 80 in 1958. He died on October 15, 1961 he was buried in a special bronze coffin the cost and permanent quality of the coffin had as much to do with the esteem in which his fellow monks held him, as it did with the legacy of fame he had left their home. I thought it was neat that they also have a gift shop that provides entry to a forested trail, winding down past several miniature building clusters and junk bejeweled shrines. Round a bend, and you see it  an entire hillside packed in urban splendor with cathedrals and famous buildings, It's hard not to take a good picture, with the Vatican's St. Peter's Basilica sharing the frame with the Monte Casino Abbey and the Alamo.