Colfax Massacre (Referred to as "Colfax Riot" by the Historical Marker)

This marker acknowledges the explosion of racial violence that occurred on Easter Sunday in 1873, resulting in the death of at least 150 African Americans. By stating that the episode marked "the end of carpetbag rule," however, the marker reinforces the white supremacist assumptions that led a mob to attack Black voters and officeholders. In response to African Americans being able to vote and hold office following the ratification of the 14th and 15th Amendment, members of white vigilante groups attacked African Americans and prevented them from voting in the upcoming election. African Americans attempted to defend themselves at the courthouse, but being outnumbered and lacking the ammunition and support of federal troops who might restore order, they surrendered to the white mob. Many of the African Americans were massacred even after they had surrendered their weapons. In the wake of the violent episode, white supremacists seized power and prevented most African Americans from voting and holding office for nearly a century owing to a combination of threats and laws designed to make it difficult for Black residents to vote. 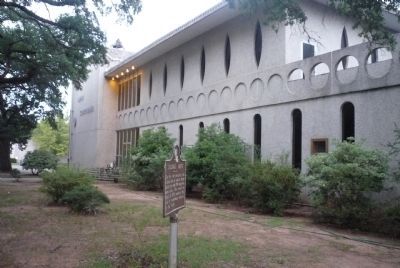 The marker was dedicated in 1950 and presents the history of the event as a "riot,' implicitly spreading blame equally among white supremacists and African Americans who defended their right to vote. 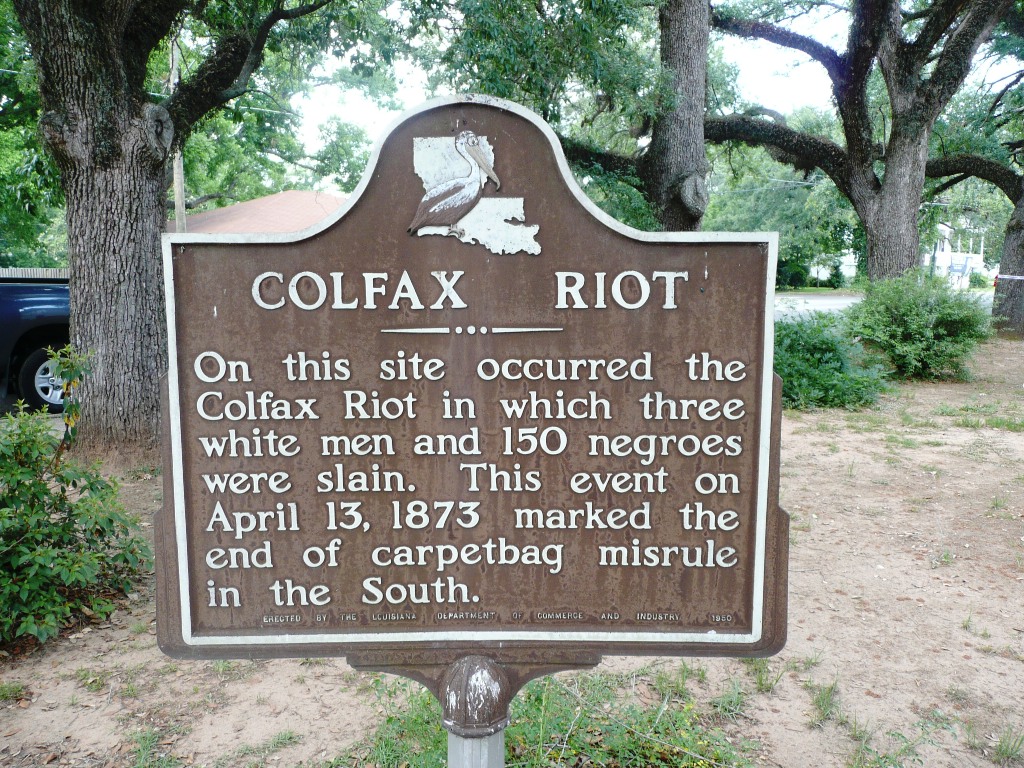 The Colfax Massacre of 1873 is one of the most brutal episodes of racial violence in the era of Reconstruction. In response to efforts by white supremacists to capture the ballots cast by African Americans, Black officeholders and others took physical control of the Grant Paris Courthouse.

Prior to the Civil war, this area was dominated by plantations that relied upon the labor of African American slaves. For example, plantation owner William Smith Calhoun controlled a 14,000 acre plantation and produced 3,800 bales of cotton in 1859. Mr. Calhoun was married to a woman of mixed racial background and in the election of 1868, he supported efforts by a group of former slaves who attempted to vote as permitted by the 14th Amendment. These Black men were threatened with violence if they tried to register or cast their ballots and the nearest polling station. Calhoun responded by arranging for the vote to take place at a story owned by a Republican at a time when the Republican party supported Black suffrage. Calhoun was arrested and charged with election fraud and with no Black men voting, the Democratic Party won a landslide victory.

Calhoun and other progressive Republicans responded by working to create a new parish out of parts of Winn and Raptide Parish. With the support of the bi-racial Republican majority that were able to control the state legislature owing to Black votes in other parts of the state, Calhoun’s effort to create a new parish succeeded. In response, local white supremacists formed paramilitary organizations and threatened violence to any white Republican or African American who might attempt to vote. By the election of 1872, anyone who voted for the bi-racial Republican Party was risking their life.

While the historical marker indicates that the violence ended "misrule" in the state, it is important to note that the violence of Easter Sunday, 1873, merely encouraged electoral corruption and gave state sanction to the murder of any person of color who attempted to vote. While the sign suggests that 150 African Americans were killed, other estimates suggest that the total was likely far greater. Reports also demonstrate that many of the men who were captured were tortured and the bodies of some of the victims were mutilated to unrecognizable degrees.

The Colfax Massacre made headlines in cities across America. Some Southerners were outraged but most kept quiet for fear that they might be the next victim. Congress passed the Enforcement Act of 1870 which allowed federal troops and marshals to go after the Ku Klux Klan and similar vigilante groups that were behind other attacks on African Americans who attempted to vote.

For a time, it appeared that federal intervention might result in changes in the South. For example, some of the members of the white mob behind the Colfax Massacre faced trial. However, charges against the members of the mob were quickly dismissed by local courts. These men might have faced a federal trial under the terms of the Enforcement Acts, but the Supreme Court ruled that this law only applied to actions by the state and in United States V.Cruikshank. Because the leaders of the mob were acting as private individuals, the ruling suggested, they could only be tried by local courts and not by the federal courts.

In the wake of the Colfax Massacre, there was a spike in the size and number of paramilitary white supremacist groups across America. African Americans were effectively disfranchised by the all-white officials of the Democratic Party that seized control of Louisiana through electoral victory or by paramilitary force.