Harold's New York Deli, owned by Harold Jaffe, is a Jewish deli in Edison, New Jersey. Located next to the Edison Hotel and at the intersection of the New Jersey Turnpike and Interstate 287, Harold's draws a huge local crowd as well as travelers. The joint is known for its massive portion sizes and family style dining as well as their "World's Largest Pickle Bar." They also offer breakfast and classic Jewish fare. When dining at Harold's prepare to leave with tons of leftovers! 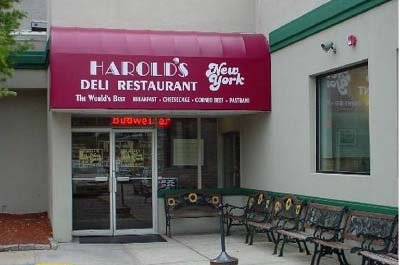 One of Harold's famous sandwiches http://www.bravotv.com/blogs/what-happens-if-you-eat-a-sandwich-that-looks-like-this 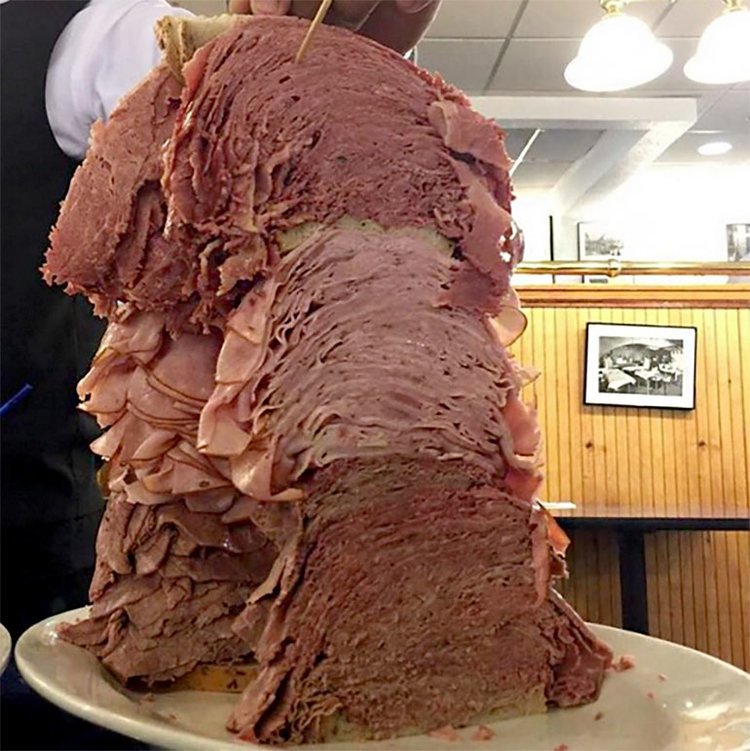 Edison, New Jersey’s Harold’s New York Deli’s parking lot on a Sunday afternoon bursts with mini vans and SUV’s all belonging to large families eagerly awaiting their weekend feast of deli meat and pickles. When every group walks through the glass doors, passing the mile-high cakes and desserts and the massive selection of Dr. Brown’s soda, Harold Jaffe, the owner of the critically acclaimed establishment, greets them with warm eyes and a gentle smile. He tells each family they will have to wait twenty minutes to earn a seat in the dining room. Once the time finally arrives, Harold calls out the family’s name and escorts them to a table where they are in for the meal of their life.

Harold Jaffe put his mark on the deli business after serving in the Vietnam War as a marine when he decided to put a pastrami-making class to good use (Hoffman). While he has partnered with many different delis, his most notable work has been with Carnegie Deli in New York City, one of the most famous delis in the nation and one that sparked intense interest in Jewish delis (Bilmes). Harold takes much inspiration from this acclaimed deli, including several menu items that appear on Harold’s menu as well as Carnegie Deli’s. But, Harold adds his personal touches that make his place rather unique. First, the napkins at every place setting contain a Yiddish glossary, the perfect learning opportunity for the whole table. After going over the new vocabulary, head over to the “World’s Largest Pickle Bar”—a name that may or may not be accurate— to grab any kind of pickle desired as well “Health Salad,” a Harold’s deli classic play on coleslaw. But, the main event is still to come: the sandwiches. Harold’s sandwiches are larger than life, the smallest one feeding one to three people and the largest feeding four to seven. Offering a variety of in- house made meats and breads from Pechter’s Bakery in Elizabeth, New Jersey. The bakery itself is a century old and delivers “3,000 three-pound loaves of break a week, twice a day so it’s never stale” (Hoffman). Harold’s has something for everyone, especially since one sandwich can fully feed an entire family. The comically gigantic sandwiches have caught the attention of several newspapers, magazines, and television shows including Man vs. Food. The deli offers other Jewish classics as well, including knishes, blintzes, and matzo ball soup, all of which also come in bafflingly large portions. He does poke fun at those who walk into Harold’s expecting normal sized helpings with sections of his menu called “For The Dieter” and “Just A Scoop.” The meals offered in these sections sound much tamer and easier to digest than the rest of the menu, but they still defeat anyone who believes they can tackle them on their own. Harold Jaffe knows every diner leaves his deli full to the brim with a doggy bag in hand.

Harold’s serves breakfast as well. The early morning menu features pancakes the size of a tire that you have to slice like a pizza and omelettes that could make a heart stop. But no matter what you order on the menu, Harold claims everything on every menu has a secret ingredient or a special taste that no one can replicate. He credits his Russian grandmother with teaching him her recipes, and he honors her and her heritage with every item that leaves the kitchen and the Yiddish words that she used constantly. The special taste of Harold’s grandmother’s recipes may be why Harold vehemently squashes any association with any delis of the same name, specifically the Harold’s Deli in Lyndhurst, New Jersey. Stated in large font on the home page of their website, Harold’s in Edison makes sure they are the only one of its kind.

But, Harold’s Deli owes its perfected craft to its German roots. “Delicatessen” is a German word meaning “to eat delicacies,” often referring to a specialty market selling items unique to the place. Eventually, the idea of the deli came to New York City thanks to the masses of people arriving to the United States in the early 1900s. Jewish people began adapting the delicatessen to their own kosher diets. Harold Jaffe found himself in one of New York’s most famous Jewish delis, Carnegie Deli, and experienced the height of deli culture. Delis turned into full-blown restaurants, popularizing Jewish foods and breads like rye and pumpernickel. Harold witnessed this embrace of Jewish fare and brought the magic to his own deli, keeping with tradition as well as appealing to all people with his massive portion sizes (Delicatessens).

Even though authentic Jewish delis are few and far between nowadays, Harold and his deli ensures to maintain the classic and now nostalgic atmosphere of Carnegie Deli from America’s past. The classic diner tables and chairs as well as the properly and formally dressed waiters remind diners of another time when Jewish delis took over the restaurant industry. The delicious food with the “special taste” keeps customers, including myself, coming back for more time and time again.

Harold’s New York Deli represents the beauty of the American dream and the inspiration immigrants provide to the United States. Without the German immigrants bringing their beloved delis over to the States, Harold Jaffe would have never been able to break into the business after working at Carnegie Deli. And, his diners could not enjoy his oversized, homemade Jewish delicacies.

Families waddle away from their tables and pass the case of cakes that looked so scrumptious on the way in. Now, looking at any food makes their stomachs flip since they have just finished stuffing their faces with meat and pickles. Doggy bags in hand, they make their way back to their mini vans to enjoy the rest of their Sunday, knowing good and well no one will be hungry for dinner.