The Pasto Agricultural Museum, named for Dr. Jerome K. Pasto, is located in Pennsylvania Furnace, PA, not far from The Pennsylvania State University. It opened its doors to the public in 1979 after five years of planning and preparation by a group of graduates from the University’s College of Agricultural Sciences and Dr. Pasto. The museum began with more than 500 artifacts, most of which were from Dr. Pasto’s personal collection. Preserved artifacts in the museum have led to work in Kenya by Dr. Duiker, a faculty member at Penn State University. The museum provides the public a window into the history of agriculture; artifacts have been transported to the Pennsylvania Farm Show, an annual exhibition in Pennsylvania’s capital, where children and families have the opportunity to learn about first farming techniques.

This photo from Penn State shows the entrance to the new museum building which made the expansion of displays possible. Touch screen technology is now incorporated into the museum's displays. 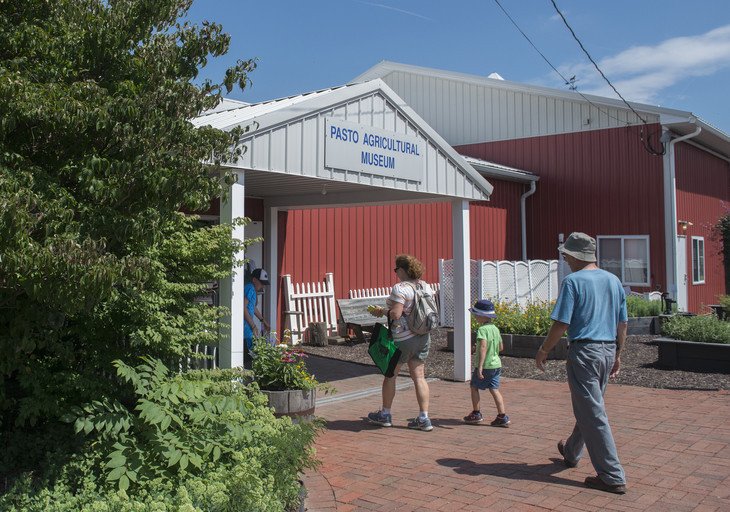 This photo, from the Pennsylvania State University Archives, shows Dr. Jerome K. Pasto with his wife, Frances Pasto. Dr. Pasto's personal collection of antique agricultural equipment made the birth of the museum possible. 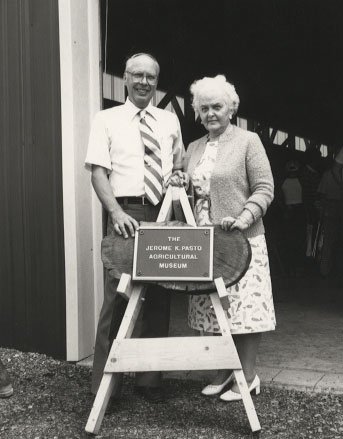 Alumni of Penn State University’s College of Agricultural Sciences began organizing to create an agricultural museum in 1974, but the Penn State Agricultural Museum wasn’t officially opened to the public until five years later, in 1979. The museum was founded with only $1,500 and a few display cases, but it has grown tremendously since; it now has over twenty collections of artifacts including beekeeping, transportation, and lighting. The museum’s goal is to provide an accurate representation of early agricultural and rural life with a focus on the northeastern part of the United States. Its original location was in the Agricultural Administration Building on Penn State’s University Park Campus, but it moved into its own building as a result of its growth and involvement in Pennsylvania’s annual Ag Progress Days.

The museum was named after Dr. Jerome K. Pasto, a former professor and associate dean of the College of Agricultural Sciences; he was also the museum’s first curator. His passion for agriculture and his collection of antique farming equipment are what prompted and made possible the creation of the museum. Dr. Pasto retired in 1980, the same year the museum name was changed to honor him, but he continued to volunteer as the museum’s curator until 1999. In 1993, Penn State named him an Honorary Alumnus to the university for his contributions. Dr. Pasto was also awarded the Philip Philip Mitchell Award in 2001 for his volunteer work at the University and with its alumni association. Pasto is known around the world for his contributions to agricultural science.

Ag Progress Days, one of Pennsylvania’s largest outdoor agricultural expositions, is held yearly for three days during August. The Pasto Agricultural Museum holds a silent auction during the exposition to raise funds in an effort to connect the past to the present by expanding and improving their exhibits and displays. It is because of the silent auction and donations that the museum was able to add interactive displays and new technology to the exhibits in 2017. Donations for the auction typically include collectibles and antiques. During Ag Progress Days, the museum also hosts demonstrations of the equipment displayed in the museum. In 2013, they demonstrated how to use a 1905 Panama Hay Press, which farmers began using after WWII to improve the transportation and storage of hay.

Dr. Sjoerd Duiker, Penn State faculty member, took a simplified version of the hay press to Kenya after a past visit sparked a desire to help. During his visit, Dr. Duiker realized that making hay bales was an opportunity for the youth in a small village to make money, as they had access to a field where they could grow hay. In order to determine how he could best help this Kenyan community, he made a visit to the museum where he observed the equipment previously used in the United States. After making a few modifications to the design of the press, so it is usable without animals, the youth are now able to sell hay to small farms nearby.

The Pasto Agricultural Museum has grown tremendously since its doors opened in 1979, and it continues to contribute to the university’s rich history. With its involvement in Ag Progress Days, the museum has continued its mission to educate the public about the history of agriculture in the northeastern United States. It has not only had an impact on the United States; through the work of Dr. Duiker, it’s had an impact in Kenya.