Born in 1814 as a slave, Mary Ellen Pleasant, who would come to be known as Mammy Pleasant, has a long history in San Francisco that people all over the Fillmore District have come to know. After gaining her own freedom, she helped many other slaves escape their captivity through the underground railroad. She fled to San Francisco with money from her deceased husband and opened many businesses throughout the city. She also invested in a 30 room mansion that she designed and had built, the location of which is where her plaque stands today.

The Plaque placed in San Francisco, Ca located at 1661 Octavia St is a representation of where her 30 roomed mansion used to be. 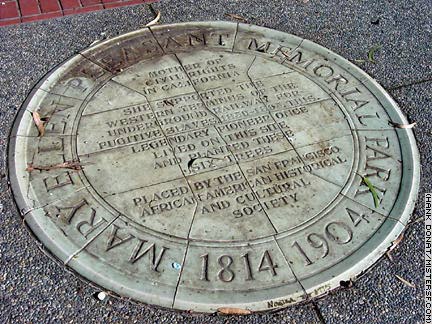 Mary Ellen sued a local transportation company for not allowing herself and other African American's ride.

Mary Ellen Pleasant was a woman who encountered many struggles, but through perseverance and tenacity was able to create an empire as a result.  Born a slave in 1814 in Georgia, she was later bought and set free and developed a life in Rhode Island. When the Fugitive Slave Act was passed in 1850, she was able to escape to California. By the time she arrived in San Francisco her husband had died, leaving her a large sum of money and his name. Using this money she invested in stocks and real estate, eventually amassing a fortune of $30 million.

Long before the actions of civil rights activist Rosa Parks in 1955, Mary Ellen Pleasant took a stand for the rights of African Americans in San Francisco. She sued a transportation company that refused to let her ride on a San Francisco street car. San Francisco is well known for its famous streetcars, even to this day, but many do not know the story of how they prevented African American’s from riding. She successfully sued two railroad companies, with the second case going all the way to the Supreme Court of California and establishing a precedent and abolishing the segregation of the city's public conveyances.

Although Mary Ellen Pleasant participated in many things within the civil rights movement, many San Franciscans know her for her 30 room mansion, and her love for the white man she named her home after. In 1904 Mary Ellen Pleasant died what many believed penniless but remained a public figure to this day.