This historical marker commemorates Livia Simpson Poffenbarger (1862-1937), one of the leading female activists, publishers, and historians in West Virginia during the early twentieth century. She owned and operated the local Star Gazette newspaper and was very involved in state and national Republican politics. She also founded the Col. Charles Lewis Chapter of the Daughters of the American Revolution and the Mason County chapter of the American Red Cross, and served in numerous other organizations. Poffenbarger is most remembered today for her efforts to preserve the Point Pleasant battlefield and have the Battle of Point Pleasant designated as the first conflict of the American Revolution. While she succeeded in getting the battlefield preserved as a park and monument, her assertion that Point Pleasant should be included as part of the Revolution has been largely unrecognized. In 2005, the West Virginia Division of Archives and History installed this marker at the edge of Tu-Endie-Wei Park to honor Poffenbarger's campaign to preserve the site.

This marker was placed at the edge of Tu-Endie-Wei State Park in honor of Poffenbarger in 2005. Image obtained from the Historical Marker Database. 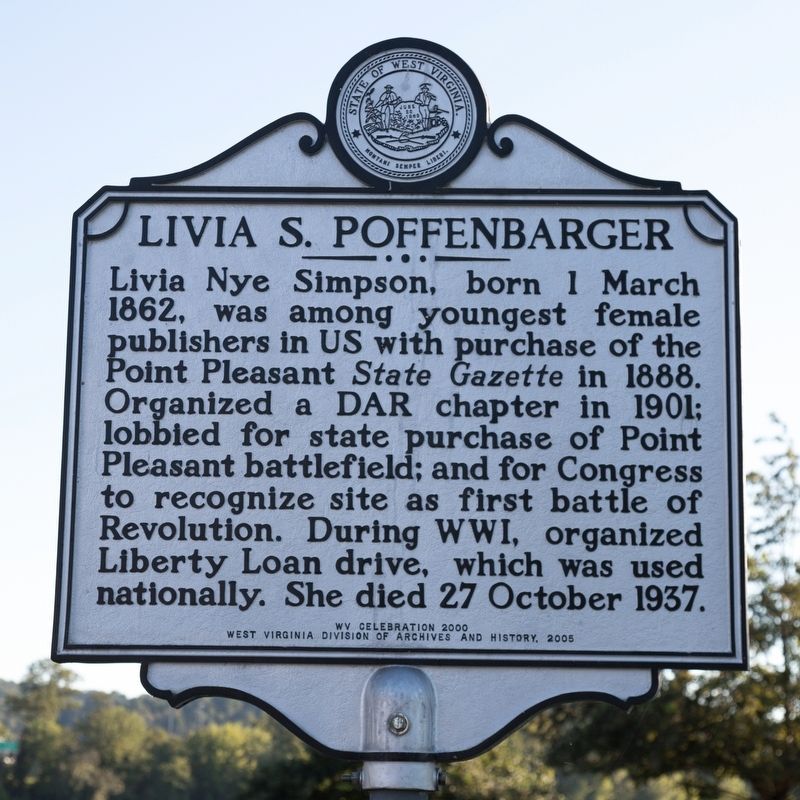 Livia Simpson Poffenbarger (1862-1937) was active in Republican politics, ran her own newspaper, published several books, and worked to preserve the history of the Battle of Point Pleasant. 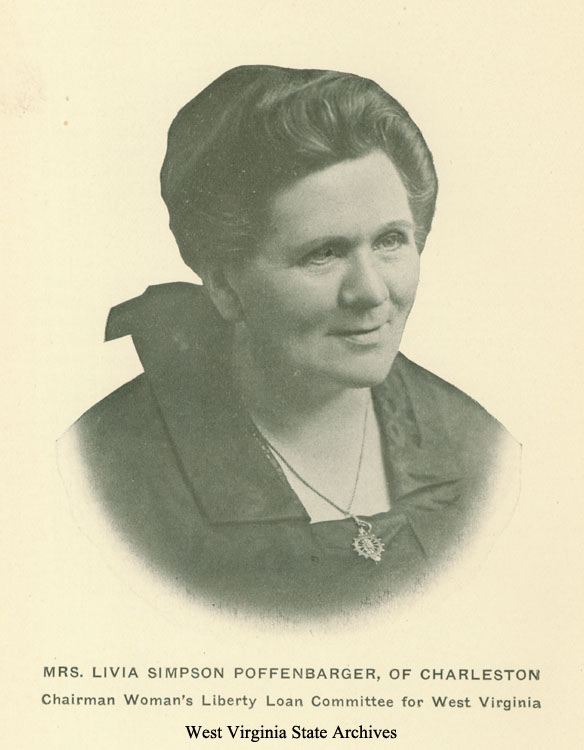 Livia Nye Simpson was born on March 12, 1862 in Pomeroy, Ohio but grew up in Point Pleasant. While her father was active in the Democratic Party, she became a strong Republican supporter. In 1888 she purchased the ailing Republican Star Gazette newspaper of Point Pleasant and saved it from financial collapse; this made her one of the youngest female publishers in the United States at the time. In 1894 she married George Poffenbarger, a lawyer and future judge on the West Virginia Supreme Court.

Starting in the early 1900s, Poffenbarger campaigned strongly to preserve the Point Pleasant battlefield and have the battle recognized as the first conflict of the American Revolutionary War. She began pushing the issue in her Star Gazette newspaper, and eventually published multiple books and pamphlets over the years arguing for the designation. In 1901 she founded Point Pleasant’s Col. Charles Lewis Chapter of the Daughters of the American Revolution (DAR); the group successfully petitioned the state to acquire the battlefield site and establish Tu-Endie-Wei State Park. Poffenbarger also lobbied Congress to pass a bill in 1908 designating funds to build a Battle of Point Pleasant monument on the site.

Poffenbarger argued that the Battle of Point Pleasant should be considered the first of the American Revolution based on speculation that Lord Dunmore had conspired with the Shawnee tribe to annihilate the Virginia militia. This in turn would leave the colony too weak to rise up in rebellion against the British. In her writings, Poffenbarger quoted multiple political figures and historians discussing the importance of the battle; however, none of them ever outright claim it to be the first conflict of the Revolution. Reactions to her claims were mixed. While some such as the national DAR initially supported the idea, scholars such as State Historian Virgil A. Lewis lambasted the notion. Among other reasons, it was noted that the Battle of Point Pleasant occurred six months before the Battles of Lexington and Concord in April 1775, and that it largely had nothing to do with the main issues leading to the Revolution.

Aside from writing and historical preservation work, Poffenbarger occupied herself with numerous other duties. In addition to the local DAR, she also organized the Mason County chapter of the Red Cross. She was heavily involved in Republican politics, serving in various state and national Republican committees. Poffenbarger helped direct the women’s suffrage movement in West Virginia and supported the anti-temperance movement during Prohibition. During World War I she helped organize three Liberty Loan drives in the state, and was awarded an honorary law degree from West Virginia University in 1919 as a result. She served as Vice President of both the National Star Spangled Banner Association and the National Women’s Press Association; she was also a member of various committees and boards, including for Morris Memorial Hospital and the West Virginia Society for Crippled Children. On November 11, 1925, she was chosen to give the dedicatory address for a World War I veterans’ monument in Charleston. Poffenbarger died in Charleston after an extended illness in 1937.