The Baltimore & Ohio Railroad has had a presence in Grafton since the town's founding when their line reached the area in the early 1850s. In 1911 the B&O constructed a new, large station and an adjacent hotel to handle the growing rail traffic going through Grafton. The B&O not only provided a means of transport for people from Ohio to Baltimore, but it also acted as a major coal transport between the Ohio Valley to the East Coast. This opulent, Beaux Arts style building contained B&O offices, ticket and luggage departments, a passenger lobby, and a restaurant. It prospered during the first half of the nineteenth century, but by the 1960s it had entered a steep decline. Passenger service at the station was discontinued in 1971, and by 1988 the building lay vacant. Since 1998 the Vandalia Heritage Foundation has been working to restore and repurpose the station. It is included on the National Register of Historic Places as part of the Grafton Downtown Commercial Historic District, created in 1984.

The three-story, Beaux Arts style train station was built in 1911, and is currently undergoing renovations to serve a potential variety of purposes. Image obtained from the Carol M. Highsmith Archive, Library of Congress.

Postcard of the station around 1945. The building to the left is the Willard Hotel. Image obtained from Blackwood Associates, Inc. 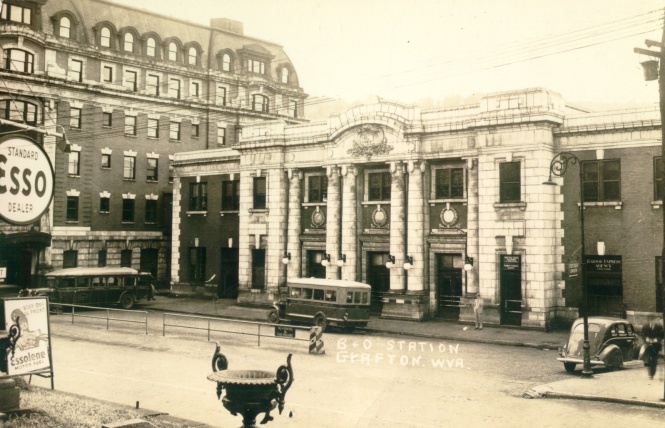 The B&O insignia can still be clearly seen from the front of the building. Image obtained from jpmueller99, Wikimedia. 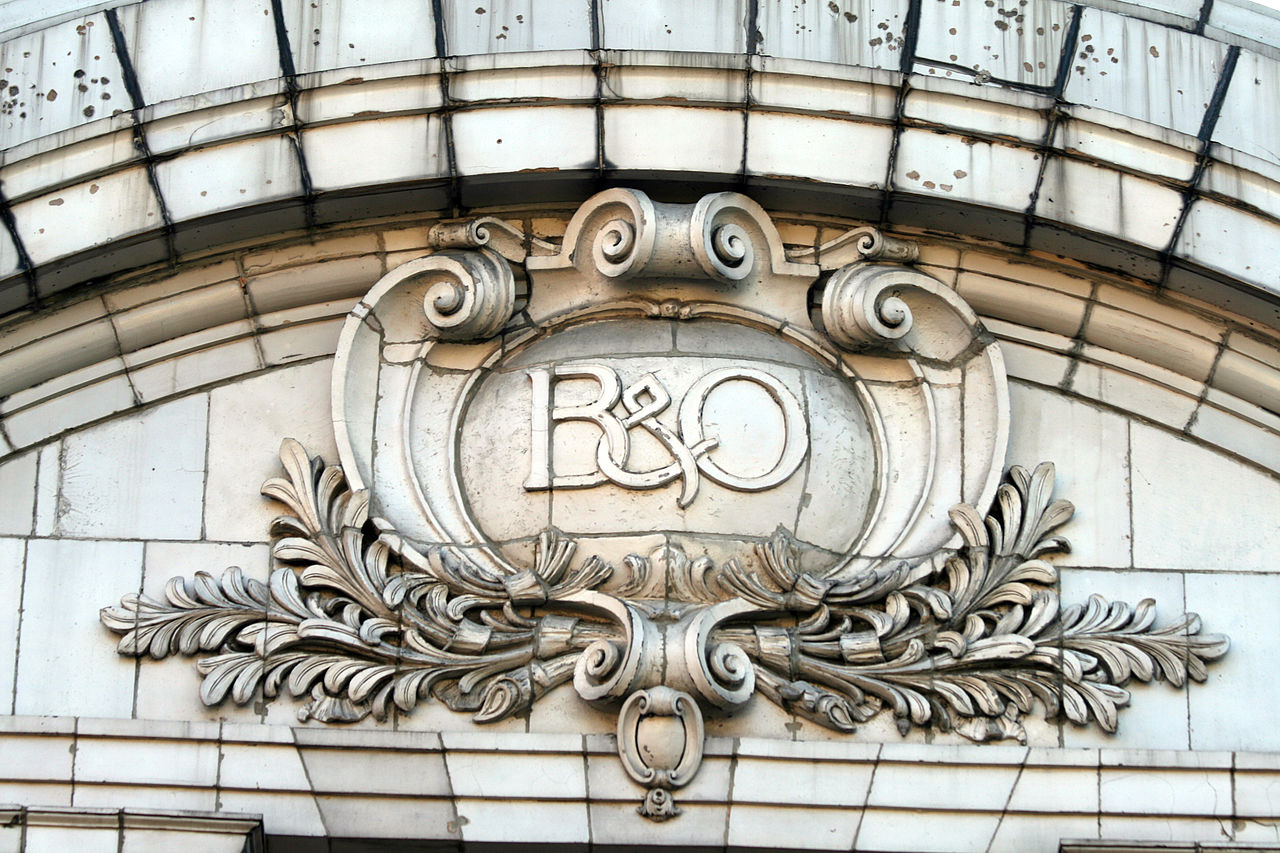 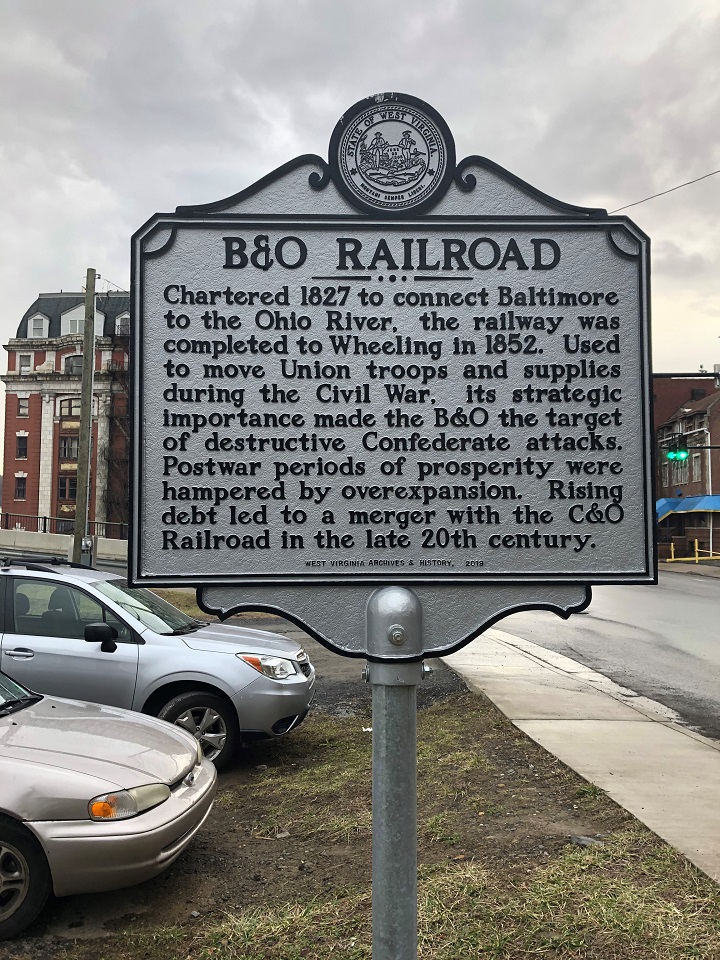 The town of Grafton was founded in the 1850s as a direct result of the Baltimore & Ohio Railroad (B&O) building its line through the area. Around 1852 a building called the Grafton House was constructed to serve as both the train station and hotel for passengers traveling on the line. By the early 1900s, growing rail traffic made this structure insufficient for the area’s needs. In 1910 a section of land along East Main Street was acquired to build a new station and a new hotel.

The B&O Railroad Station was the first of the two structures to be built, and was completed in 1911. This imposing, three-story structure cost $125,000 to construct and was noted for its opulence. It was designed in the Beaux Arts style and utilized brick, granite, and ornamental terra cotta for the exterior, and included marble floors and tall columns in the interior. It interestingly had a façade on both the side facing Main Street, and the side facing the railroad. The first floor was divided into an East Wing, a West Wing, and a Grand Hall in the center. The new station contained local B&O offices, baggage and ticket offices, a large passenger lobby, and a restaurant. The Willard Hotel opened next to the station a year later to house passengers traveling on the line.

For the first few decades the train station flourished as traffic on the B&O increased. At its peak in the 1920s there were over thirty passenger trains passing through Grafton every day. After World War II, passenger traffic began a permanent steady decline due to the rise of highways and airlines. In 1971 the B&O discontinued passenger service at the Grafton station altogether, but the building remained in use as the division office. During the 1980s CSX Transportation, the successor to the B&O, transferred local operations from Grafton to Jacksonville, Florida; both the station and the nearby Willard Hotel were left vacant as a result. Cargo trains continue to travel on the line but do not utilize the station.

Around 1998 the Vandalia Heritage Foundation was established and began working to redevelop both structures. The roof of the station was soon replaced to prevent more damage to the interior. Over the years Vandalia has slowly worked to restore and renovate the B&O Station for the purpose of adaptive reuse. Various ideas have been floated for the building’s future use. Currently there are plans to create a space available to rent for special events, a music venue, retail shops, offices, and even residential units.

This monumental Beaux-Arts complex is an important example of a building type far more common in Europe than in America: a combination railroad station and hotel. Both buildings are faced with red brick and terra-cotta trim. The station, at right angles to the hotel, is recessed and, because of the slope of the land, rises two stories on Main Street and three on trackside. By far the more ornate of the two structures, it has a five-bay central block treated as a monumental gateway with three-quarter columns of a robust, indeterminate order separating its three entrance bays. Above, a massive entablature and parapet curve segmentally at the center to accommodate a large, garlanded cartouche containing the familiar B&O logo. The former B&O Railroad passenger terminal is closed to the public. However, the large glass doors on the Main Street side of the building provide a good view of the interior. Railroad enthusiasts can take in the daily activities of the CSX railroad yard next door.