Constructed by local builder, Clinton Campbell, in 1926, the A.E England building was originally constructed as an auto building. The building’s design of the large storefront windows served its purpose to showcase vehicles from Hudson Motor Car Co. (1909-1954). Not only did the A.E. England building serve as an automobile showcase, but also served as a business for the Electrical Equipment Co, a stationary store, and an art gallery over the years. Currently, the building has been restored by the City of Phoenix and is known to be Historic Property in the Phoenix Civic Space.

View of South Phoenix from Westward Hotel in 1930. The A.E. England Motor building at the time was in the area of the white tents to the right side. Image courtesy of ASU Library Digital Depository, McCulloch Bros. Inc. photographs (1884-1947). 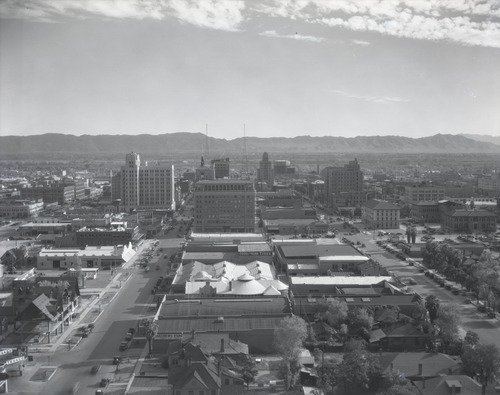 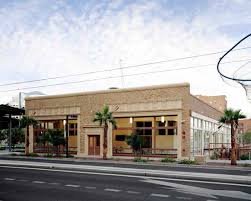 Throughout the 1920s-1930s, the A.E. building served as a showcase for vehicles under the Hudson Motor Co. The company had started in Detroit, Michigan and was founded by Howard Coffin, George W. Dunham, Roy E. Chapin, and largely funded by the department-owner himself, Joseph L. Hudson. This type of model car was known to be one of the first low-priced cars on the American market and had sold over 4,000 vehicles in the first year of being in business. Their competitors at the time were Ford and Chevrolet due to them coming out with the Essex line. Hudson Motor Company’s peak was in the year of 1929, however, due to the Great Depression, their sales became slow. After Hudson’s continuous losses in business, they eventually merged with Nash Co.

After years of being vacant, in 2008, the A.E. England building was rehabilitated with Phoenix Historic Preservation bond funds. As of today, it is part of Civic Space Park, and is also used by the community and Arizona State University’s downtown campus, also home to the Artlink A.E. England Gallery. The space is utilized as space for classes, meetings, and art/cultural events.