The opening of the Dupont Plaza Hotel occurred in 1963 on Condado Beach – one of Puerto Rico’s most renowned beaches on the island. The hotel attracted hundreds and thousands of visitors every year with its prestigious image. From its opening until 1980, the hotel was operated by the Sheraton hotel company, and by December 31st, 1986, the hotel’s reputation came to an abrupt end. At first, some of the hotel workers were irritated with the company, but ultimately, their decisions to confront these tensions resulted in claiming the lives 98 innocent individuals and marking the most destructive hotel fire in Puerto Rican history and the second deadliest in United States history (Hirsley).

This picture depicts the pinnacle of the Dupont Plaza Hotel arson. As seen, the fire was the most destructive on the bottom floors and traveled to higher parts of the building. The guests who escaped the fire and nearby civilians watched the arson afar on 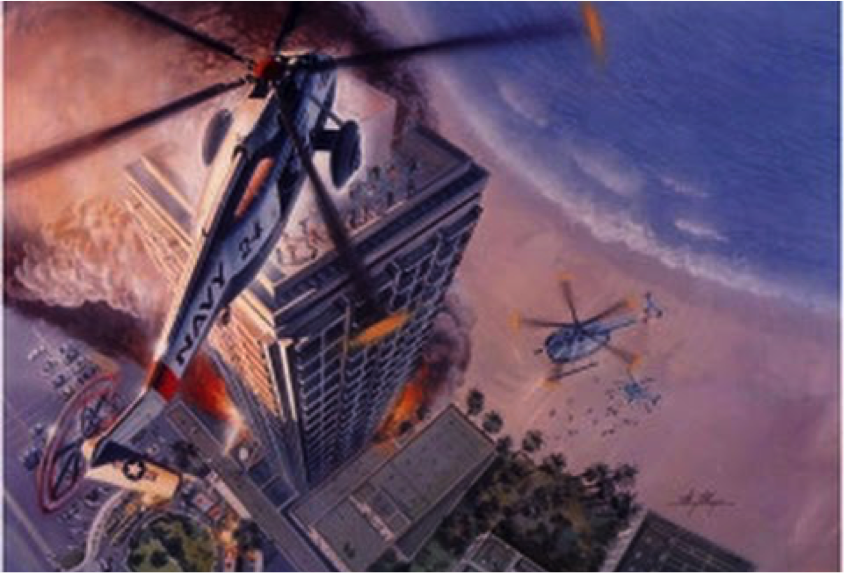 This picture depicts the aftermath of the Dupont Plaza Hotel arson. As seen, responders fled to the scene after the extinguishment of the fire. In the hotel itself, the responders and agents sifted through the burned ash and rubble in order to find remain 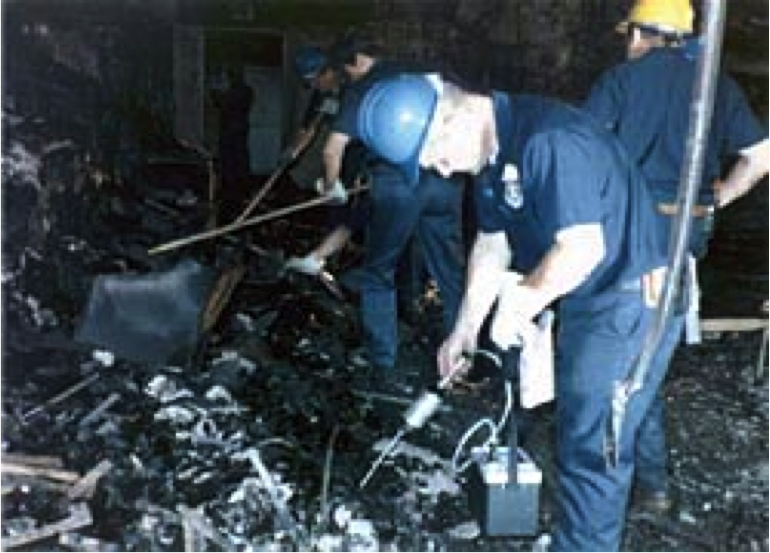 The United States enacted fire safety requirements for all public buildings in 1990. Before that year, companies and corporations, such as the Dupont Plaza Hotel, implemented fire safety regulations and authorizations based on local ordinances and commands. In June of 1985, the Dupont Plaza Hotel was inspected by the local fire department and the hotel was found to have flaws in its fire safety systems, such as lack of evacuation plans and automated fire sprinkler systems (Clifford). Across the United States, in just 1985 alone, there were 7,500 reported fires in hotels and motels with $56 million in damages – $127 million in today’s currency rate (Press).

The Dupont Plaza Hotel contained employees apart of the International Brotherhood of Teamsters, which was an employee union that started in October 1986 and represented 250 out of the 450 hotel workers (“NFPA Journal”). As negotiations between the hotel and the union arose, many union workers became disgruntled because there was an alleged plan to eliminate 60 union employees (Tepfer). In the same week the arson took place, there were three other small fires reported at the hotel (Hirsley). Tensions between the union employees and management had inclined so greatly that the Dupont Plaza Hotel had to implement thirty more security guards to its staff and local citizens were warning tourists and visitors to stay away from the hotel (Hirsley).

On December 31st, 1986, the union’s employees held a meeting to go on a strike in front of the hotel. The meeting ended at 3:00 pm. At the time, the hotel contained approximately 950 to 1,000 guests (Hirsley). At around 3:30 pm, three union workers, Héctor Escudero Aponte, José Rivera López, and Arnaldo Jiménez Rivera, planned to ignite several fires before the protest by instigating flames on the newly purchased furniture on the ground floor of the hotel (Tepfer). After the three men set the fuel alight, the flames rapidly escalated to massive proportions and grew out of control. The fire quickly spread up the main staircase of the lobby and later traveled to the grand entrance of the casino, which was adjacent to the lobby (“NFPA Journal”). At that time, there was an estimated 130 guests in the casino – this was where the majority of deaths took place. Some guests on the upper levels of the Dupont Plaza Hotel perished because of smoke inhalation; other guests on the second floor leaped to the pool deck below, and many were injured (Tepfer).

The Puerto Rico Fire Department was dispatched at approximately 3:40 pm. 13 fire trucks and 35 ambulances responded and arrived at the hotel. About 100 firefighters helped extinguish the fire hours after the ignition (Hirsley).

The total number of deaths from the Dupont Plaza Hotel arson was 98, mostly from burns, and over 140 people were injured. The majority of the victims were burned beyond recognition. Most of the victims’ belongings were destroyed. In all, 84 victims were found in the casino, 5 bodies were found in the lobby, 3 in an elevator, and 2 at a bar located near the pool outside the hotel (“NFPA Journal”).

The Dupont Plaza Hotel Arson and other hotels in this era prompted changes to hotel security policies around the world. Three years after the arson, on September 25th, 1990, the United States enacted the Hotel and Motel Fire Safety Act of 1990, which required all public building and accommodations to have properly functioning sprinkler systems in buildings higher than three stories and smoke detectors in each guest room (Wade). U.S. Representative Sherwood L. Boehlert asserted that this law was one of the first times that the United States government “took direct action to protect the public at large from the danger of fire” (Wade). The hotel was renovated in October of 1992 at the cost of $130 million and reopened as the San Juan Marriott Resort & Casino in February of 1995. Despite its absence, the Dupont Plaza Hotel will forever be a legacy to the improvement of hotel and motel safety.