Built by the Hoover Company in 1925, the police booth in North Canton, Ohio allowed police officers to operate equipment to change the traffic signals. Hoover Company employees coming to and from work and students attending the nearby elementary and high schools could safely cross the five-point intersection. Today the booth is used to share the story of North Canton through a small exhibit of photographs from the North Canton Heritage Society.

The hexagonal North Canton Police Booth at its original location at the intersection of Main and Maple Streets. 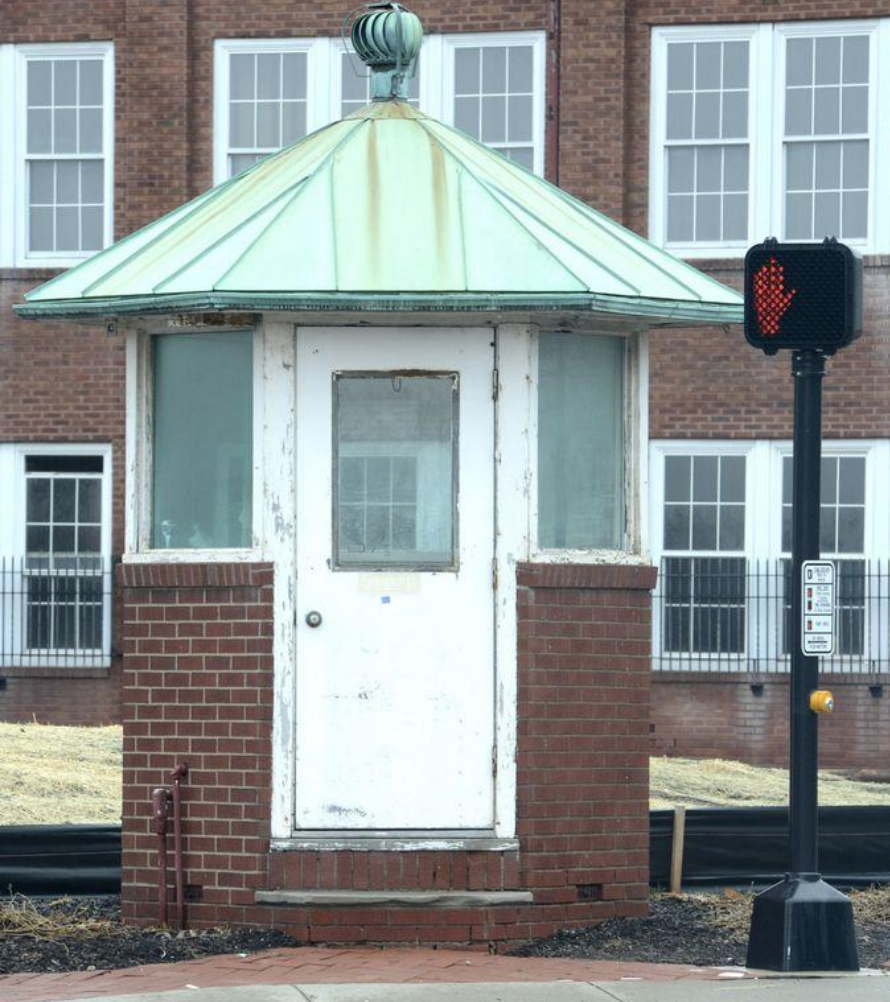 The restored police booth was relocated across the street in 2015. 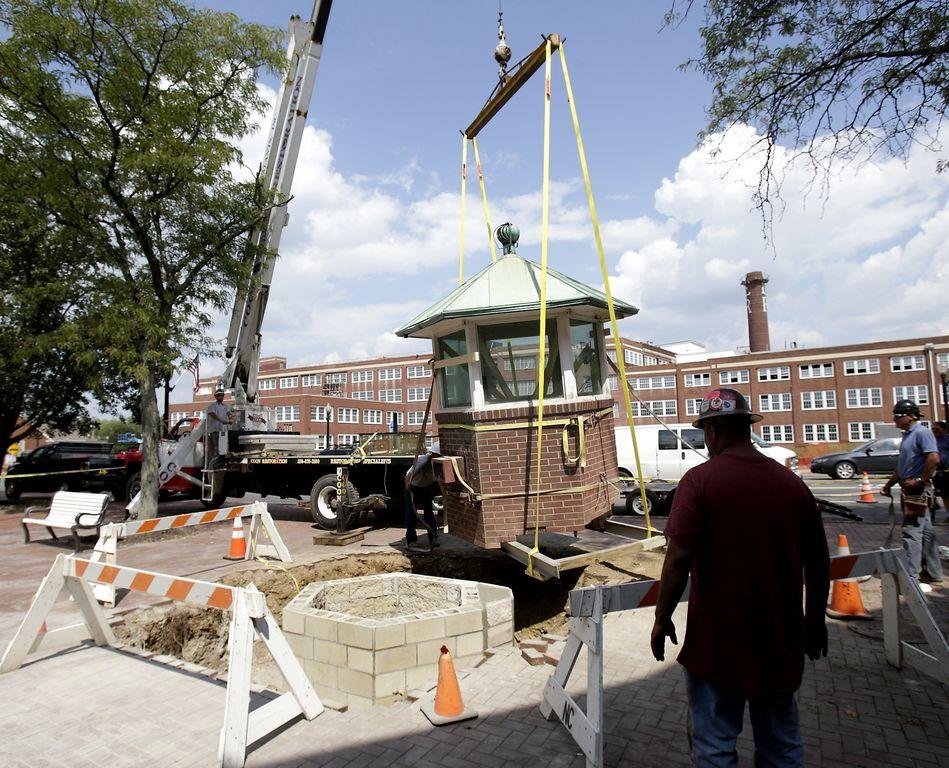 The North Canton Heritage Society opened a permanent exhibition on the history of the city in January 2018. 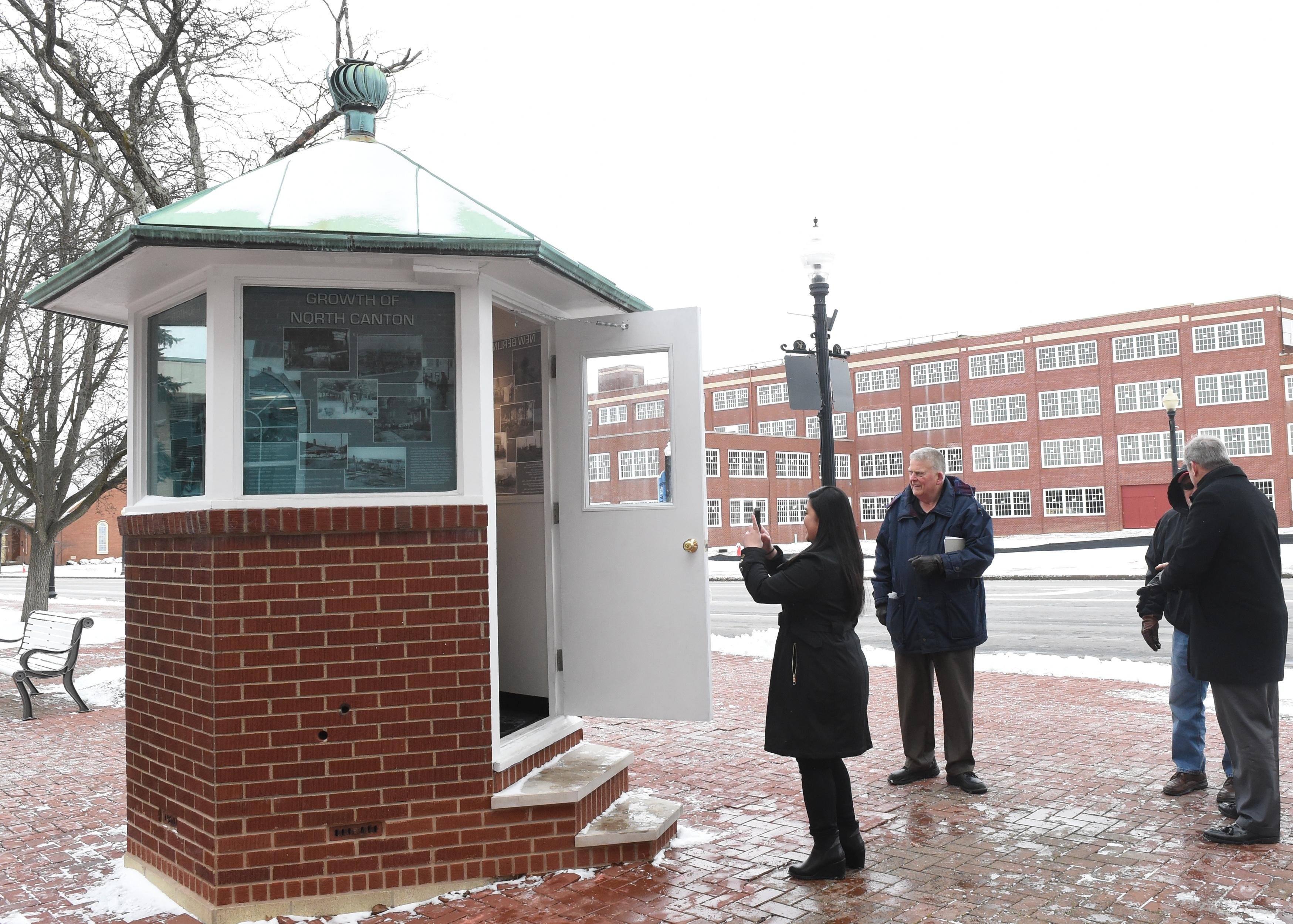 The Sun, North Canton's former newspaper, announces the construction of a "police hut" on the Square. 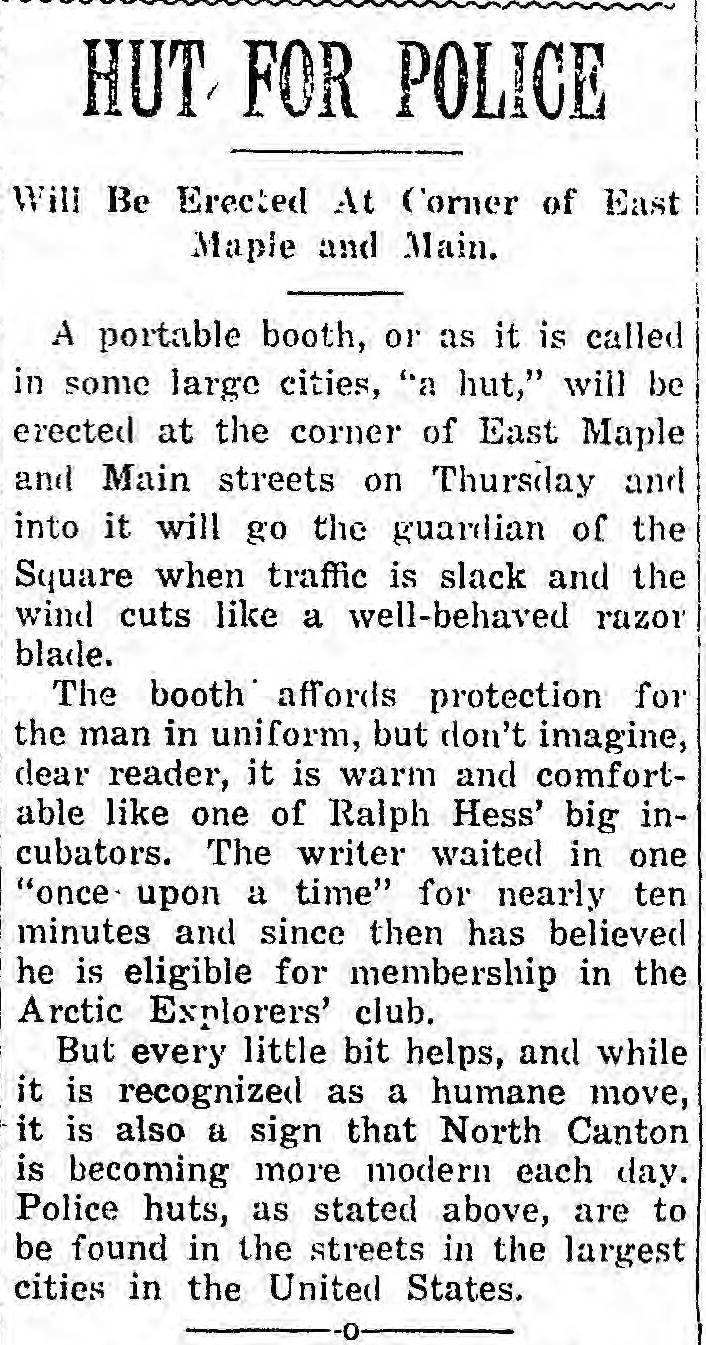 A brief article in The Sun mentions the construction of a new hexagonal police booth, which still stands today. 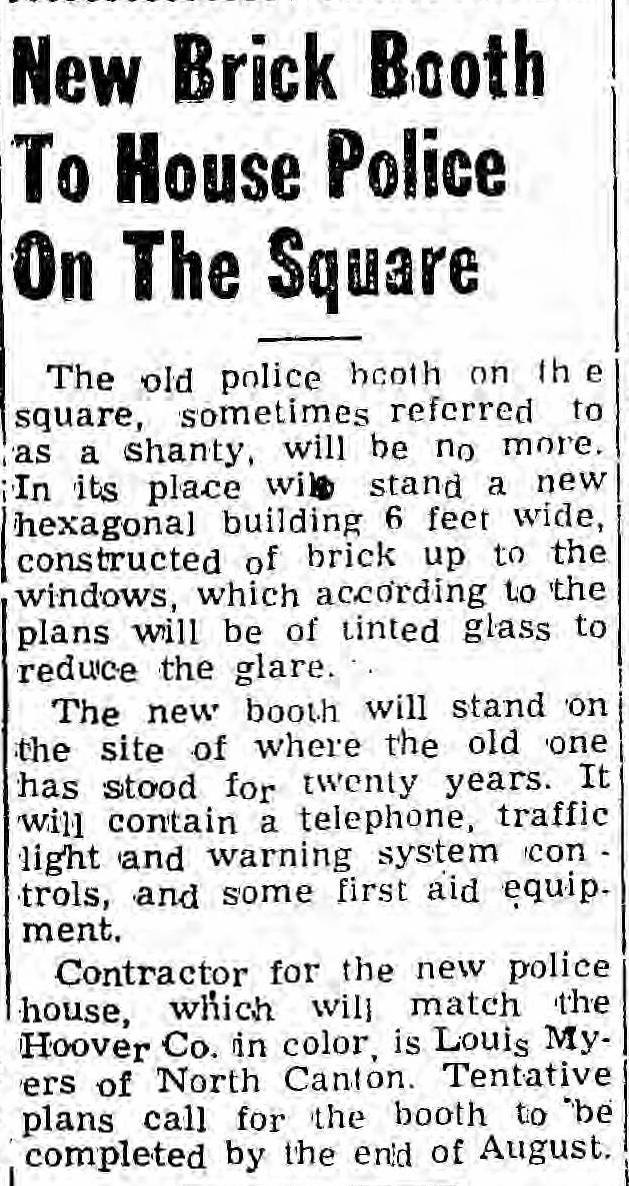 The North Canton police booth, also known as the “guard booth” or “police hut,” was built by the Hoover Company in January 1925 at the northeast corner of Main and Maple Streets, the heart of the city often referred to as "the Square." The Sun, the city’s newspaper from 1922-2001, noted in 1925 that the unheated “hut” was a sign of modernization and recognized it as a “humane move” for the Square’s police officers. According to later articles in The Sun, a gas stove was added to the original booth in 1932, a new booth was constructed in 1942 after the first was vandalized, and after the second structure deteriorated, a hexagonal brick booth with a copper roof was constructed in 1955. This third police booth still stands in North Canton today.

Although the booth was built by the Hoover Company, it was the North Canton Police Department, not the company, that used it. The building had several purposes: to control the traffic lights during Hoover Company shift changes, to alert the police officer on duty by means of a signal light if he was to respond elsewhere, and to help students from the former Portage Elementary School and former Hoover High School cross the five-point intersection of Main, Maple, and Portage Streets. Additionally, lost and found notices in The Sun often requested lost items be turned in to the police booth in the Square.

While the booth brings up memories for those who have lived and worked in North Canton for generations, most remember it from their childhoods as the building that housed Police Chief Russel A. Smith, known fondly as “Smitty,” who guided students across the streets for many years and was an anchor in the community. When the police department no longer needed the booth, it served as a shelter for school crossing guards for decades.

The police booth fell out of use when the city added traffic lights, the Hoover Company closed, and children no longer walked to school. When Maple Street Commerce purchased the Hoover Complex and decided the small deteriorating building did not fit in with their plans, it was given to the City of North Canton. Despite the widespread opinion that the booth should remain at its original location, it was restored and relocated across the street in the plaza next to City Hall in 2015.

The North Canton Heritage Society hoped to utilize the booth as an information kiosk that would tell the story of the city and the achievements of the Hoover Company. On January 30, 2018, the 100th anniversary of New Berlin changing its name to North Canton, the Heritage Society opened a permanent exhibition in the police booth with photographs from their collection showing the growth of North Canton and panels sharing the story of the little “hut” that served the community for over 75 years.