The Beckley Presbyterian Church dates back to the early 1870s when a small group of around twelve people formed the Raleigh Presbyterian Church. The congregation remained small until the construction of a permanent church sanctuary in 1909. A period of sustained growth that followed prompted the erection of a new, larger stone sanctuary in the 1920s. It remains in use to this day and is a contributing structure in the Beckley Courthouse Square Historic District. The church supports the community through a number of initiatives such as support for homeless shelters and the operation of a senior center.

The current sanctuary was built in 1923 to accommodate the church's growing membership. Image obtained from the Beckley Presbyterian Church. 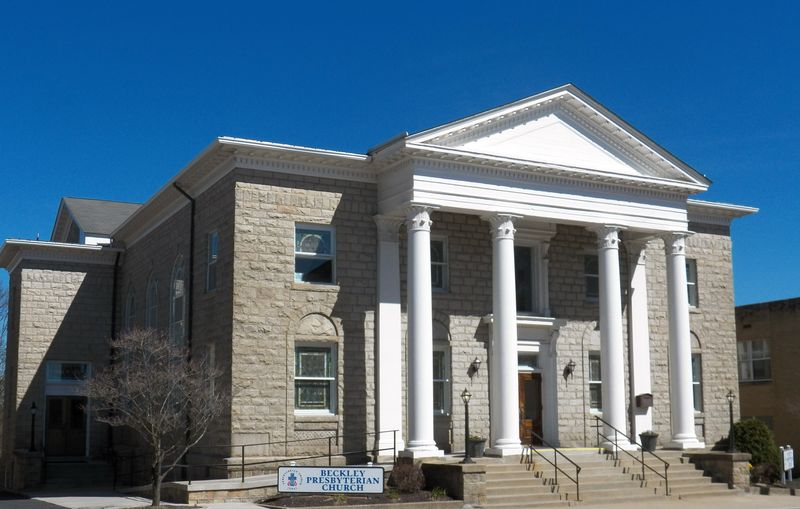 Postcard of the original sanctuary building, which was constructed on a nearby lot in 1909. Image obtained from the Beckley Presbyterian Church. 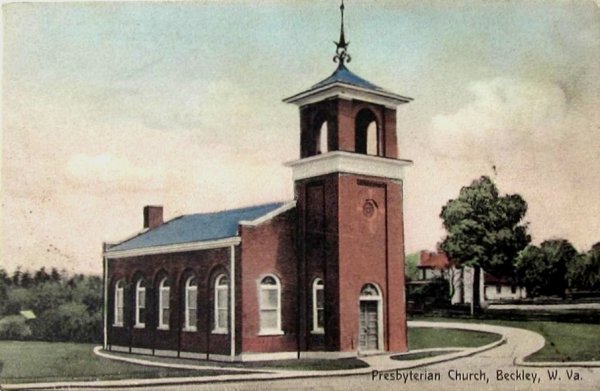 The new sanctuary shortly after its construction in the 1920s. The exterior has remained practically the same since it was built. Image obtained from Wikimedia. 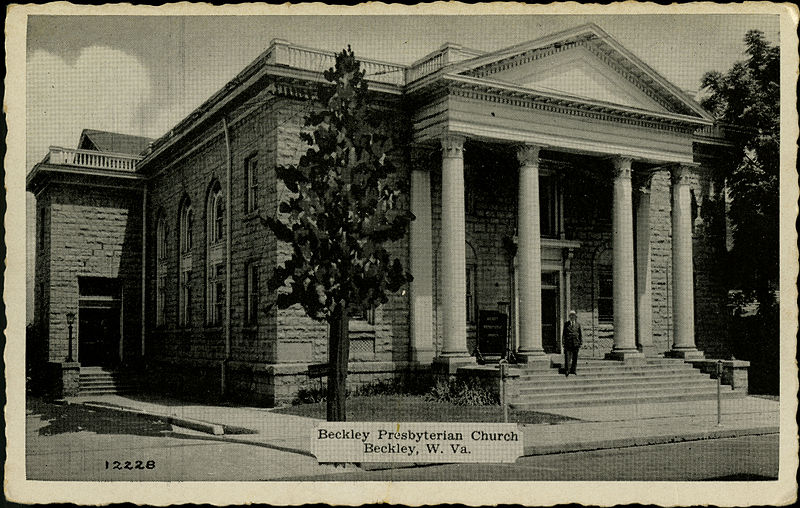 The original sanctuary was later sold to the City of Beckley and used for different purposes, such as a fire department. Image obtained from the Beckley Presbyterian Church. 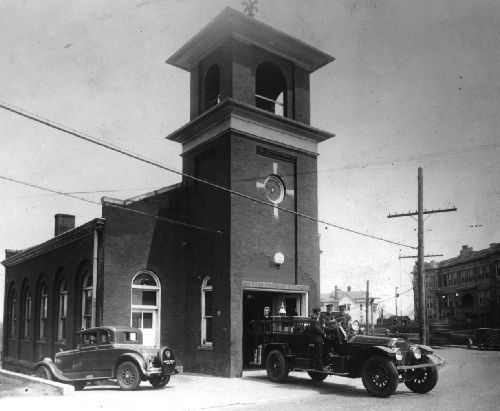 The church dates back as early as 1870 when a group of residents formed what was called the Raleigh Presbyterian Church. It was firmly established by 1872 when state senator John Wallace McCreery joined the church and became its first Elder. McCreery, who notably founded and served as president of the Bank of Raleigh, would become one of the church’s most significant contributors. For the first few decades the congregation numbered only around a dozen; meetings were held in various homes and churches throughout the community, while guest ministers provided by the Greenbrier Presbytery were relied upon to conduct services.

In 1907 the Rev. W. S. Patterson became the first pastor of Raleigh Presbyterian Church. The congregation, still only numbering in the low twenties, began planning to build a permanent sanctuary. Senator McCreery donated a lot across from his home on South Kanawha Street to serve as the church site. By June 1909 a modest brick structure had been constructed on the lot at a cost of $8,000. It was formally dedicated on July 25; reportedly the sanctuary was the first brick church building in Beckley. Church membership steadily began to grow, and at some point during the following years it was renamed the Beckley Presbyterian Church.

By the early 1920s, with its debt paid off and congregation growing larger, the church decided to build a new sanctuary.  A nearby lot on the same street was purchased and construction on the new $75,000, stone structure began. A cornerstone laying ceremony was held by the Masonic Fraternity on September 3, 1923 and attended by over 1,000 people. As construction proceeded, the original church building was sold to the City of Beckley in 1925. Over the years it served a variety of municipal purposes, housing at different times the fire department, police department, mayor’s office, council chambers, and sanitary board. An elaborate pipe organ was purchased by the church in March, 1926 for $5,600. Construction on the new sanctuary was finally completed and a dedication ceremony was held on October 2, 1927.

By 1950 the church membership numbered over 800 congregants. An education building was constructed adjacent to the sanctuary in 1953 to house its many Sunday School classes. In later years the building also housed both a Montessori school, which operated until 2006. In 1979 the original 1926, which had become too expensive to maintain, was replaced by a new Noack pipe organ; it remains in use to this day. The following year the church also organized a Shepherd’s Center, to provide services to local senior citizens.

The Beckley Presbyterian Church continues to be active in the community. In addition to the Shepherd’s Center, the church hosts a YMCA day care program, Cub Scouts, and an Alcoholics Anonymous program. It also provides support to various other local organizations such as soup kitchens and homeless shelters. A church library for Christian literature, opened in 1939, contains over 1,000 books.