The small courthouse and jail remained in operation until the new courthouse opened in 1899 to accommodate Huntington becoming the county seat, and to meet the needs of the city’s growing population.

The first courthouse and jail in Huntington, circa early 1890s. 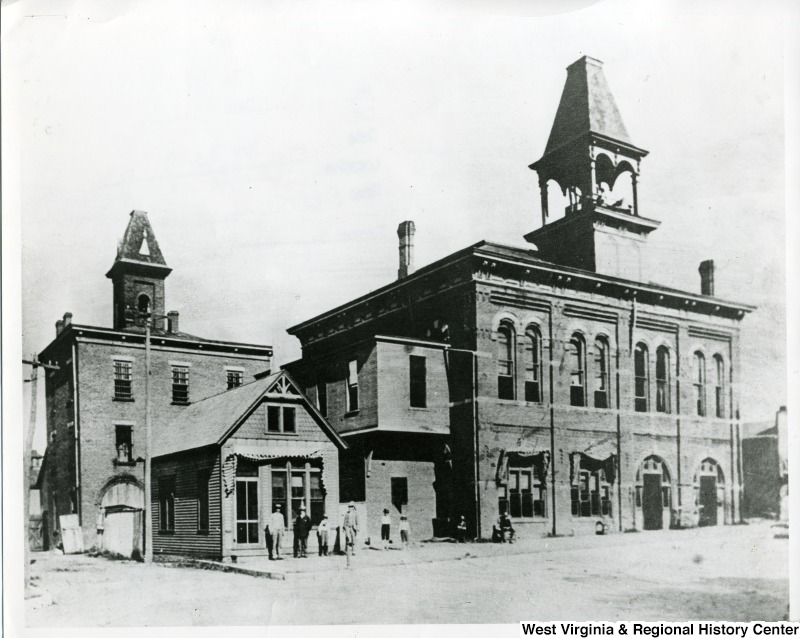 Cabell County Jail, built in 1895. the jail was located where the present courthouse stands. 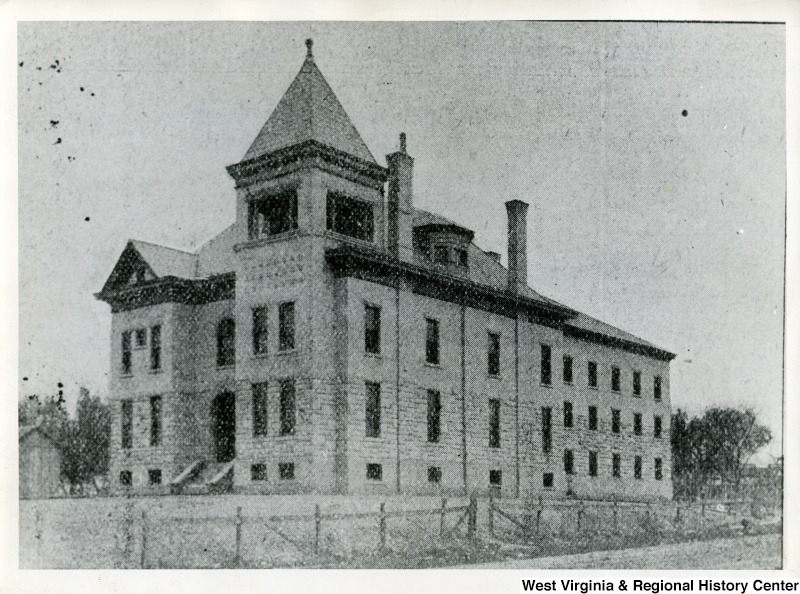 In 1870, Collis P. Huntington and his brother-in-law, Delos W. Emmons, surveyed a two-mile stretch of land along the Ohio River in Cabell County, West Virginia. Their goal was to find suitable docking facilities and a favorable location for the western terminus of the C&O Railroad. A dozen farmers occupied the area known as Holderby's Landing, from whom Collis and Emmons purchased 5,000 acres. The two formed the Central Land Company, and immediately began the construction of a train station, houses for C&O employees, shops for commerce, and saloons to generate a population boost. Quickly after that, a courthouse was built, and the constable was ordered to erect a police station as a secure place for prisoners. The young City of Huntington had the necessary fledgling economic and municipal infrastructure to handle the anticipated influx of migration to the new city.

The new city of Huntington, West Virginia got off to a rapid start. People from the North, South, and Midwest migrated to the upstart railroad town. For its first year, the City of Huntington operated without a formal government. The Central Land Company handled decisions about improving the young city, such as grading streets, building plank board sidewalks, drilling wells, and donated a large sum of money to build the first public school. While the Central Land Company functioned as a form of municipal government, and without an official police department, they established a small law enforcement ensemble. Justice Johnson served as the Justice of the Peace, A.J. Enslow served as the local Squire, and Isaac Mitchel was the city’s Marshal. Together, these three law officers policed the young city with a population of roughly 2,000 by the winter of 1871. The early law enforcement of Huntington reflected common rural nineteenth-century practice, that is, responding to crimes after they occurred.

As Huntington continued to grow, and people migrated to the young city, crime manifested in the form of petty vice and disorderly conduct. Drunkenness and public fighting became a common feature in the new city. For the city’s first four years, at least according to the Huntington Independent, the Cabell County Press, and the Argus, Huntington did not experience any major crimes. By 1875 though, the Huntington Bank was robbed, and residents believed the perpetrators were the notorious James-Younger gang. As the news of the Huntington Bank robbery spread across the country, the Evening Star, a Washington D.C. newspaper was the first to report that the bank robbers might have been the James-Younger gang.

While newspaper from around the country paid great attention to the Huntington Bank robbery, the James-Younger gang remained as the prime suspects. By October, however, the identities of the bank robbers became clear as an Illinois newspaper noted, and a telegram from Lexington, Kentucky, to the Chicago Tribune, provided new evidence. The newspaper reported that gang as the notorious Thompson McDaniels, a Missouri desperado, had been verified. As the news spread of these suspect, newspapers reported that the unknown gang lived near Lexington, Kentucky. With one member of the gang dead, and as two escaped, the fourth member, Jack Kean was apprehended and tried in Huntington. Kean was sentenced to 12 years in prison, which he served at the Moundsville Penitentiary.

The supposed James-Younger gang robbery of the Huntington Bank became one of the first instances in a series of more serious crimes that happened in Huntington’s very short tenure as a growing urban center in the Ohio Valley. The death of Marshal Isaac Mitchel in June of 1876 shocked the city and resulted in a public lynching of the murderer. In Huntington’s first decade, the new city experienced crime that resembled the stories of the western frontier but also experienced crime common in the large eastern industrial cities, and the small courthouse provided the means to carry out law and order. By 1879, Huntington recognized the need to have a formal police department as Schuyler Donella became the first Chief of Police according to the 1880 manuscript census for Huntington, West Virginia.

Settle, William A. Jesse James Was His Name: Or, Fact and Fiction Concerning the Careers of the Notorious James Brothers of Missouri. Lincoln, NE: University of Nebraska Press, 1977.