If you’re looking for one of college football’s best traditions, look no farther than Toomer’s Corner at Auburn University. Toomer’s Corner is one of the city of Auburn’s main tourist attractions. It is named after Toomer’s Drugstore, which sits on the corner at the intersection of College Street and Magnolia Avenue. The name, “Toomer’s Corner,” is from the name of the drugstore, but the drugstore got its name from former State Senator “Shel” Toomer who was a halfback on Auburn’s first football team in 1892.

This is Toomer's Corner after an Auburn win. 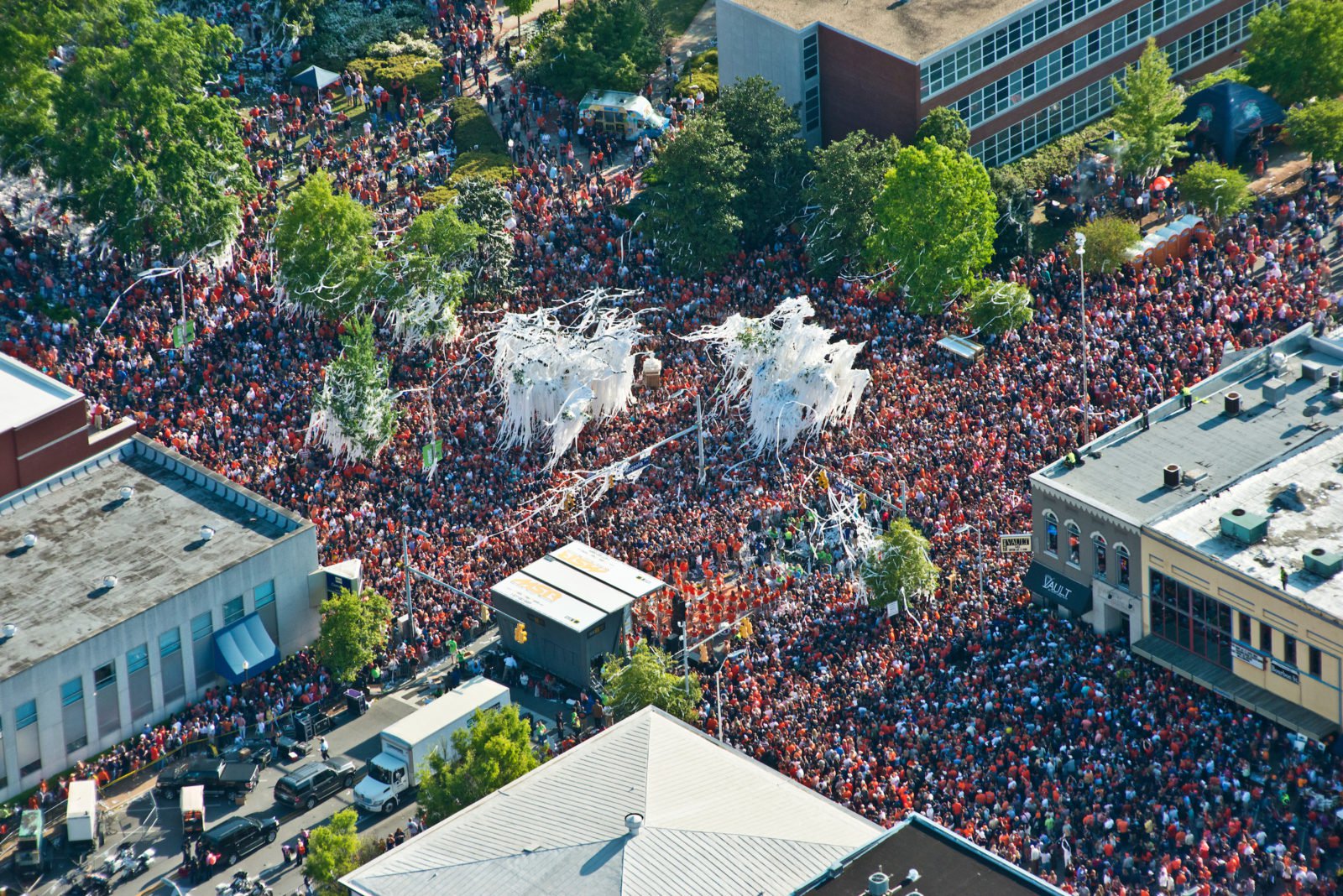 The tradition held at this site occurs after each Auburn football win or big win in another sport for the university. The Auburn faithful throw toilet paper across the large oak trees at the corner. Some say this tradition started when news about away-game scores would arrive by telegraph and the employers would put the machine’s ticker tapes over power lines in front of the store. Most say that the tradition began in 1972 when an energetic student said that Auburn would beat the “No. 2” out of their rivals, Alabama. Alabama was ranked second at that time and undefeated before the Tigers ended their perfect season. After Auburn won the game, the fans back at Auburn covered the corner in toilet paper, especially covering the Oak trees. Since that occurrence, after each football win and big win in other sports for the university, the Auburn faithful make the oak trees look like they’re covered with snow.

Toomer’s Corner has become widely known and hated by the opponents of Auburn over the years, especially Alabama. In 2010, Alabama and Auburn played each other in what is known as the Iron Bowl. This is one of the biggest rivals in sports and both teams and fan bases have equal hatred for the other. After an Auburn victory and weekly Toomer’s Corner celebration, one Alabama fan did the unthinkable. Harvey Updyke called into the Paul Finebaum Radio show and claimed that after the Alabama loss, he went to the university and poisoned the famous oak trees at Toomer’s Corner. “The weekend after the Iron Bowl, I went to Auburn, Ala., because I live 30 miles away, and I poisoned the Toomer’s trees,” he said on live air. He also went on to mention how he used Spike 80DF and that the trees will surely die. When he ended his call, he last said, “Roll Damn Tide.” Police traced the phone records to Updyke, who was then arrested and charged with one count of first-degree criminal mischief. Sadly, the trees did not survive the poisoning, but a few months later, new Oak trees were placed on the site. After that, Auburn football team went on to win the National Championship in 2010.

Today, the tradition still lives on. Toomer’s Corner has even lately been renovated and enlarged to appeal to the very large crowds at one time. Still, after each football win or big win in other sports, the Auburn faithful gather at Toomer’s Corner to decorate the trees and celebrate their school’s success.