Hamilton Hall at the University of North Carolina at Chapel Hill

Hamilton Hall was built in 1972 at the University of North Carolina at Chapel Hill in the brutalist style of architecture which became popular for a short time on college campuses. The building became the home of the social science departments and was named after Joseph Gregoire de Roulhac Hamilton, a professor at the university who created UNC's famed Southern Historical Collection. 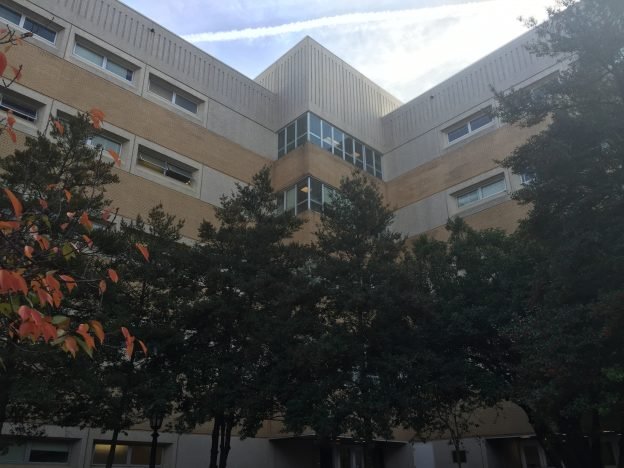 Hamilton Hall was originally scheduled to be built in 1967 and funded in that year by a special legislative appropriation. The structure was completed at a cost of $2,247,551 and included an auditorium, offices, seminar rooms, study areas, and a lounge for the political science, history and sociology departments. The building features the brutalist style of architecture that was popular for a short time during the late 1960s and 1970s. Elements of this style include the hall’s exposed concrete which was designed in a manner to bring the eye's attention to the concrete while other buildings might cover this with a facade. As a result, this style of architecture draws the eye to windows and doors that appear as cutouts in the concrete while most other buildings on the campus include architectural details that focus the eye on arches and decorative elements.

The building was constructed as the University of North Carolina was experiencing a growth in enrollment in the late twentieth century. The building is named in honor of scholar Joseph Gregoire de Roulhac Hamilton. Hamilton was a professor and author, and is credited with creating UNC's famed Southern Historical Collection. Hamilton believed that the collection of artifacts and records related to Southern history was vital because he felt that the South had “suffered culturally and politically because its records had not been preserved nearly as well as those of the North." For this reason, Hamilton suggested that "Northerners had written most of the history books" which led to a failure to adequately understand and recognize the history of southern states.1 Thanks in part to his influence, Wilson Library now stores one of the nation’s finest collections related to Southern history.

Hamilton is remembered by many for his views on race, his ties to white supremacy and his opposition to female professors. Hamilton had studied under William Dunning, a white Southerner who is best known for his defense of white supremacists during Reconstruction. Hamilton's first work echoes that of Dunning in its interpretation of Reconstruction in North Carolina. Hamilton’s book was titled Reconstruction in North Carolina and included praise for leaders of the Ku Klux Klan for their role of "redeeming" North Carolina from the political influence of Black and white legislators who attempted to encourage equality and economic diversification. Later works by historians interpret Reconstruction differently, praising the attempts of the nascent biracial Republican Party as they challenged the return of former planters to positions of power.

“Called into existence by this state of affairs, the Ku Klux lifted the South from its slough of despond by the application of illegal force which overthrew Reconstruction and ultimately restored political power to the white race . . . Heart had been put into the despairing whites and a revolution had been wrought through its operations, or, to be more exact, the results of a revolution had been overthrown and a form of government, wickedly, illegally, and unconstitutionally imposed upon the people, had come into the hands of the class best fitted to administer government, and the supremacy of the white race and of Anglo-Saxon institutions was secure.”2

Guion Griffis Johnson described her experience as a faculty member in the Department of History at the University of North Carolina at Chapel Hill in an interview. Johnson says she experiences resentment from the faculty and students for the presence of women on campus. She was one of less than a hundred women on campus. Johnson said she heard Hamilton say “no woman is competent to teach a class in history,” when she passed by him in the hall.3