The four-story house at 44 Hull Street in Boston’s North End has earned itself the title of the skinniest house in Boston. Built sometime in the 1870s, it has been renovated and kept up over the years and is still a privately owned home. At only about ten feet at its widest point, it stands out from other North End apartments because of its extremely narrow proportions. Although there is some disagreement as to why the house was built so narrow, many local stories support the idea that is was built as a “spite house”.

View of the Skinny House from the archway of Copp's Hill Burying Ground. 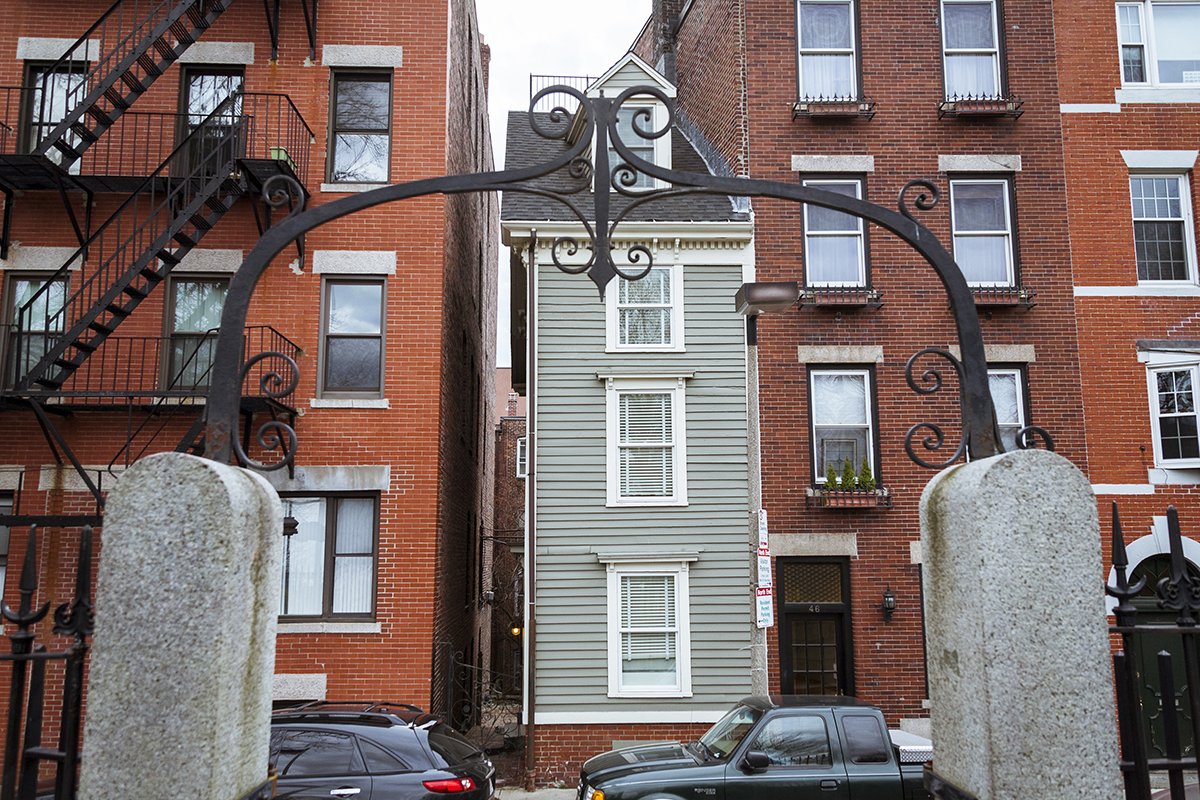 The Boston Skinny House, built sometime in the 1870s, sits on a lot that is only 274 square feet. It is directly across from the Copp’s Hill Burying Ground and old North Church can be seen from it. Because of this, it looks as if it might be a stop or a sight on the Freedom Trail. However, it has recently been inhabited by a couple with one daughter who loved living in this tiny house. It was also rented to tourists who claim that the house felt like home to them, despite its size. In terms of living comfortably, though, it provides very little space. At their widest point, the walls inside measure 9.2 feet across, and each floor consists of one room, except for the floor that houses the living room and bathroom, which is the only floor that is separated by a door. The challenge of living in a house so small has not deterred owners of the house. For example, the previous owners said that shopping for furniture to fit inside the house was more math than shopping, as intense measuring was needed, but the house’s location and history make it an interesting and unique place to live. Information about the Skinny House is scattered and differs between sources, but there are commonalities among them.

Accounts of the origins of the house, while fuzzy, converge on the idea that the house was built out of spite. One local legend claims that two brothers inherited the land in the North End from their father and, when one brother went away to fight in the Civil War, the other built a large house, leaving his brother with only a tiny plot of their father’s land. Instead of moving somewhere else, and because he did not have very much money to buy more land, he built the tiny house to spite his brother and to block light and the view from his brother’s house. This is why the Skinny House is also sometimes called the ‘Spite House’.  Another story, common in the 1920s, claims that a Tory built the house to block light from shining on his neighbor’s house with whom he quarreled, another example of why the idea of the house being a ‘spite house’ has endured through the years. Though these stories have persevered throughout the years, it is not known what the true story of the house is.

The legends of the origins of the house, while mysterious, have continued and evolved through time, apparently since the early 20th century. It is hard to imagine wanting to build a house so narrow, but it is also an area of Boston with notoriously tight lots, and it is conceivable that someone simply used the space they had to build a very narrow house. Furthermore, the North End during this time was struggling and, while it had once been a very important part of town, it was becoming a very poor area. Therefore, it is possible that the original builder simply had only enough money to buy the small plot of land that the Skinny House is built on and enough to build that small of a house. Regardless of the original intentions of the building of the house, the term ‘spite house’ has remained, pointing to a possibility that it was actually originally built out of spite.

The exact year in which the Skinny House was erected is also up for debate, but according to Ward maps from 1874, it seems that the Skinny House must have been built later, as the empty lot, though small, is visible there. The ward map shows how narrow the lot is and also how the backyard of the Skinny House has a larger square footage than the actual foundation of the house. The house has been renovated over the years and no longer looks like it must have in 1874, but its width and surprising appearance still remain. It has no front door, and can only be accessed through a narrow side alley, but it has been lengthened since its building, and is now about 30 feet long. The house stands as an extreme example of the narrow roads and small but expensive housing that is common in Boston and especially common in the North End. The last time the house was sold in 2017, it went for $895,000, in large contrast to its 2000 sale price of $345,000.1 It goes to show that even a ten-foot-wide house could be a hot commodity in the real estate market of the North End today.

Regardless of whether the original builder was a slighted brother or a Tory fighting with his neighbor, the Skinny or Spite House at 44 Hull street has been a landmark through time, attracting tourists and visitors to see the spectacle of the narrowest house in Boston. While it is unknown who built the house originally, the idea that the house was built out of spite has remained. However, the Skinny House is now sandwiched on both sides by much larger apartment buildings, so if the builder’s intention was to block someone else’s light or view, that intention has not aged as well as the house.