It is 1904. This event happened with one man in Topeka and another in The Vatican. Nicholas Chiles, an established editor and owner of The Plaindealer. Pope Pius X is the Pope during the turn of the century. The important groups were Western Negro Press Association who sent the letter and The Pope, Pius X, who sent a letter in response. This event gained a significant amount of attention during the time. This is a mostly unknown piece of Civil Rights history. Yet this event is only remembered because it was the Pope.

Here's the ceremony opening the memorial. 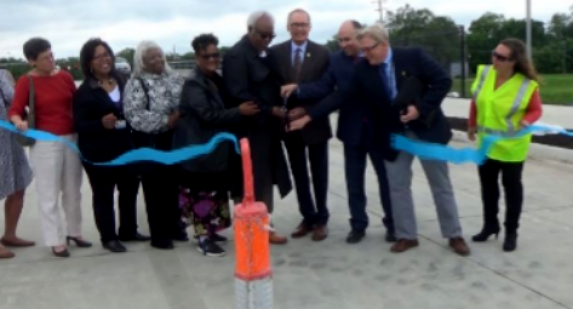 Here's the location in Google Maps. 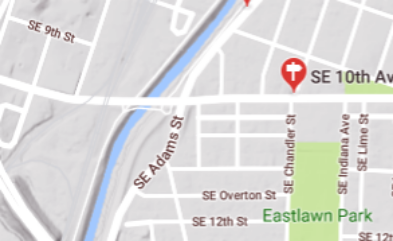 The Nicholas Chiles Memorial Bridge is in Topeka, Kansas. The bridge stand as a way over the Shunganunga Creek. It is was supposed to be on S.E. 10th and west of Branner Trafficway. Pope Pius X and Nicholas Chiles had their letter exchange in 1904. The man honored, Nick Chiles, was a newspaper owner and editor for the The Plaindealer in Topeka. He was most known during his life for his activism. This activism led him have a famous letter exchange with the Pope over racial discrimination. This event received notable recognition at the time. This was six years before the founding of NAACP in 1910. Nick Chiles is, undoubtedly, a figure in the early Civil Rights Movement. Not just a notable newspaper editor. Despite his achievements and position in turn of the century Topeka (Being a rich man in the community), he still has no monument. This is not a Clio Project for the monument, it is a Clio Project to what could have been. As, after it's proposal, the the idea of naming the bridge for Nick Chiles was rejected.

During an annual meeting of Western Negro Press Association, the group adopted a resolution. President Nicholas Chiles and the members were concerned with lynching, inequality, and the new system of segregation. We do not have a copy of the letter, but we can infer by using Pope Pius’ letter. Chiles wanted Catholics to help African-Americans or that the Pope should hold the United States accountable for their mistreatment. Chiles sent copy of the letter to Senator Burton. The letter was, then sent through Cardinal Gibbons, who sent the letter to the Pope and received his response.

What was the Pope’s response?

Pope Pius X says that all races are equal in Christ. He also says all Catholics must befriend African-Americans. African-Americans in return were to be religious and take part in redemption. He says that, although African-Americans “commit the most crimes”, they deserve equal treatment under the law. The Pope’s letter was the one that got notoriety, but the articles always mentioned Nick Chiles. Perhaps, because this was unheard of at the time. Unfathomable, that the Pope would respond to such minor people. Nonetheless, this chapter of Nick Chiles’ life would have been lost to the ages if it wasn’t for Pope Pius. Nicholas Chiles was a notable man, in his own right. He was most known nationally for the letter exchange, but he filled his life with other amazing accomplishments. Such as, when he bailed Carrie Amelia Nation (the temperance activist, destroyed saloons) out of jail and worked with her on a short lived temperance newspaper called The Smasher’s Mail. It was discontinued, due to disagreements between the two.

As noted before, this is a moment in early Civil Rights, not the first and not the last, but an unknown moment. This event predates the NAACP’s birth and lynching campaign. It might have been one of the first stands for Civil Rights in the 20th century. The envelope is pushed again in 1926. Chiles would run against Charles Curtis for Kansas State Senate, he would win 8,000 votes, but he didn’t win the position. He was the first Black man to run. But eventually, he was cast aside by the Black community, during the time Woodrow Wilson, as he was too soft and civil with issues and sending letters wasn’t working.

But, despite all of these achievements. This monument is nowhere to be seen. Here’s the supposed location in Google Maps. But, there’s no marker or pinpoint for it. I can suspect that this is the location.

"Nick Chiles Candidate for the U.S. Senate." Philadelphia Tribune (1912-2001); [Philadelphia, Penn.], 12 June 1926. ProQuest Historical Newspapers: Philadelphia Tribune, www2.lib.ku.edu/login?url=https://search.proquest.com/docview/530910188?accountid=14556. Accessed 10 Oct. 2018. This document is announcing that Nick Chiles is running for Kansas Senate. It tells us that he's running against Charles Curtis. His platform is, unfortunately, cut off. But, what from I can read, his platform is to enforce the whole constitution. In my Clio Project, I will use this as extra information on this election.

"Nick Chiles, Pioneer Editor Dies at Topeka." Philadelphia Tribune (1912-2001) [Philadelphia, Penn.], 4 Nov. 1929. ProQuest Historical Newspapers: Philadelphia Tribune, www2.lib.ku.edu/login?url=https://search.proquest.com/docview/530985836?accountid=14556. Accessed 10 Oct. 2018. This article tells about Nicholas Chiles' death, who he was, and major events in his life. He dies at 62 in 1929. He waited several weeks, while ill, before going to a hospital in Topeka. He had been the editor of The Plaindealer for 30 years. He was a prominent figure in the African-American community. The article also says that he ran for Kansas Senate against Charles Curtis. He won 8,000 votes. In my Clio Project, this article serves as an overview of what Nick Chiles did and what I want to talk about. It can give extra information for my other sources.

"Pope Pius X to the Negroes." Los Angeles Times (1886-1922) [Los Angeles, Calif], 26 Apr. 1904. ProQuest Historical Newspapers: Los Angeles Times, www2.lib.ku.edu/login?url=https://search.proquest.com/docview/164247512?accountid=14556. Accessed 10 Oct. 2018. This article displays the the letter Pope Pius X sent in response to Nicholas Chiles' letter. The letter Nick Chiles sent was about getting the Pope to end African-American discrimination through the Western Negro Press Association. In the Pope's letter, he responds, that many Catholics should befriend African-Americans. Futhermore, He says they should be given justice under the law and be treated in a christian manner. The Pope concluded with the statement that many Americans feel the same. This is my main source for the letter to the Pope incident in Nick Chiles' life.