The Skywalk Memorial Plaza commemorates the victims and first responders of the Hyatt Skywalk Collapse that occurred on July 17th, 1981. The memorial was dedicated on November 12th, 2015. It is located in Hospital Hill park and is a block away from the hotel where the disaster occurred, now called the Sheraton Kansas City Hotel at Crown Center.

Photo of the dedication ceremony at the memorial on November 12, 2015 featured in the Kansas City Star. https://www.kansascity.com/news/local/article44479488.html 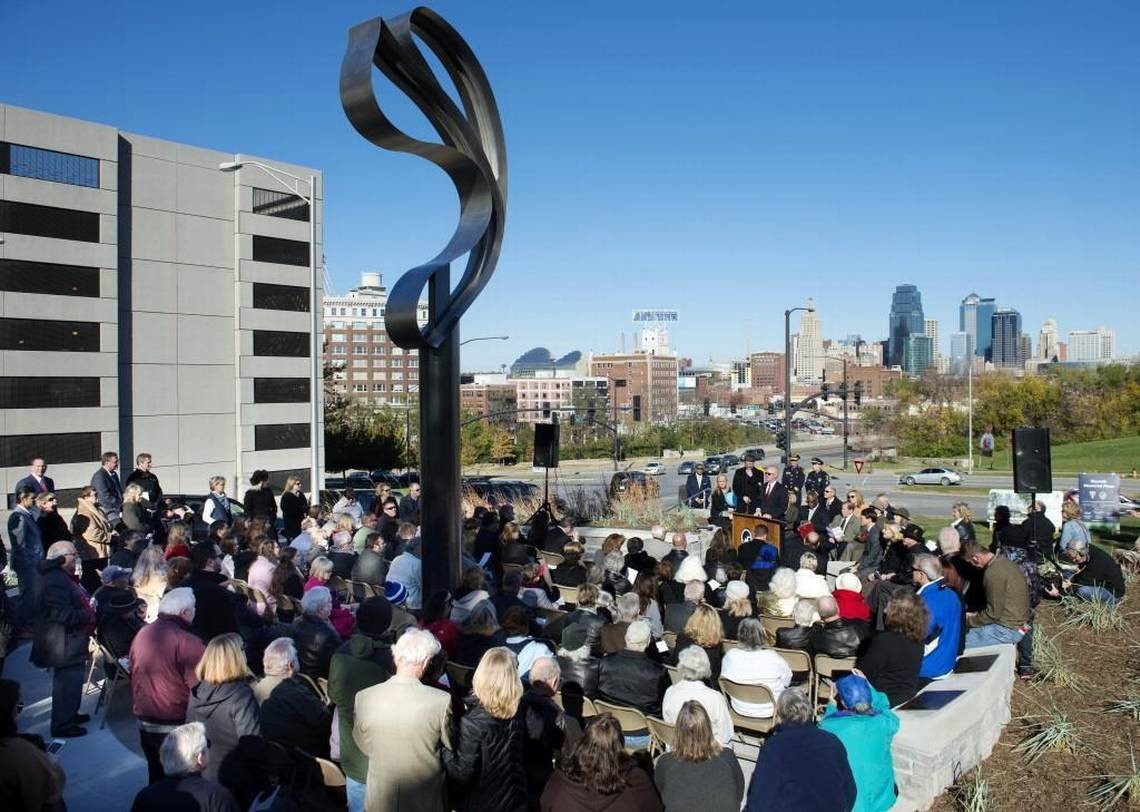 Concept design for the memorial. It features a flowing statue as a contemporary depiction of a couple dancing on a pedestal engraved with the names of the 114 victims of the collapse. This picture was featured in a Kansas City Star article about the plans 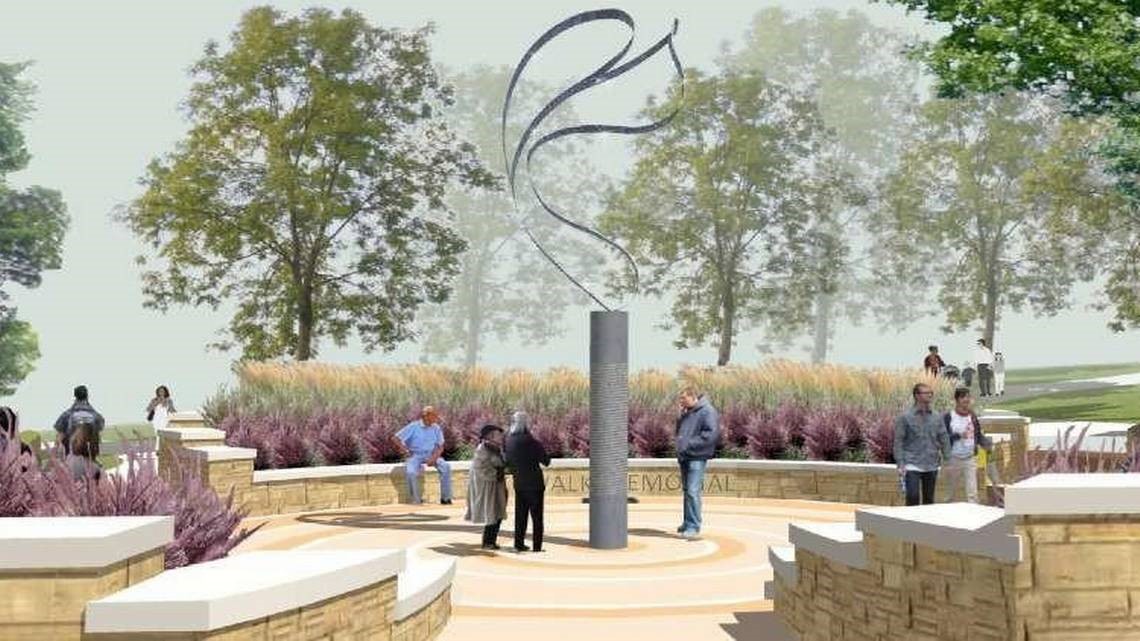 The wreckage that remained after the collapse, featured in a Kansas City Star article published on the 30th anniversary of the disaster along with the announcement of a book to remember the tragedy and to support the creation of the Skywalk Memorial. htt 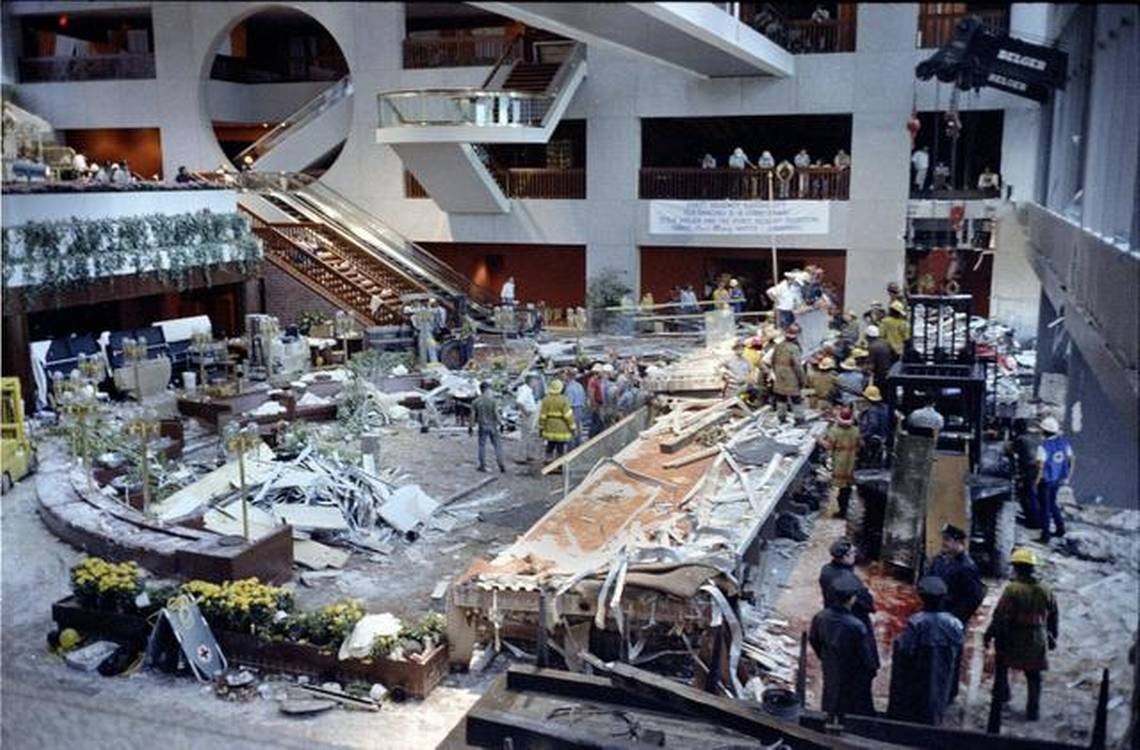 Current design of the same lobby after the collapse. The hotel is no longer owned by Hyatt and is now the Sheraton Kansas City Hotel at Crown Center. The original skywalks hung approximately where a glass chandelier is now and connected the two areas on t 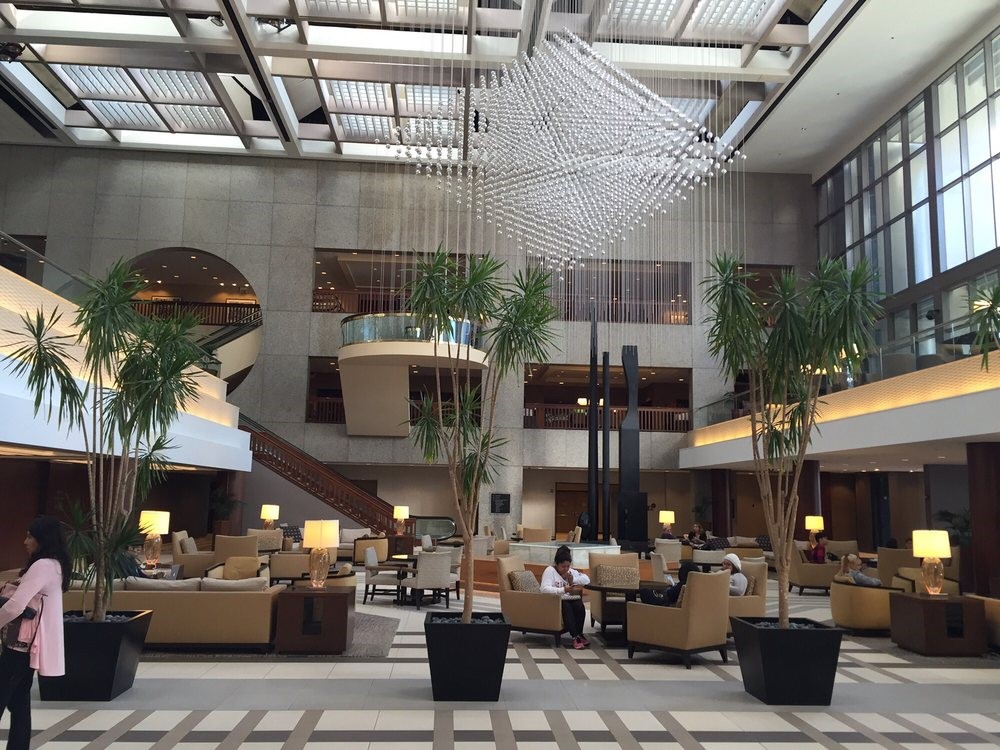 On a warm summer evening, the Kansas City Hyatt Regency Hotel hosted a tea dance in the main lobby. Around 1,500 people, most of them older couples, were swing dancing to the sound of the Steve Miller K.C. Big Band filling the atrium. Everyone was in the mood for dancing and the packed lobby had couples dance on the two famous skywalks that the Hyatt boasted. Shortly after the band began playing “Satin Doll,” a classic jazz standard, those in attendance heard popping noises and realized the danger too late. Both skywalks fell to the lobby below. The disaster had people trapped and struggling between the walkways and trying to breathe with not only the walkway suffocating them but also water from severed pipes pouring down onto the chaos. Emergency responders were sent to the scene, trying to save as many as they could, even being completely silent in order to find people under the debris. After the dust had settled, 114 people died and 269 people were injured. The collapse would remain the deadliest structural collapse until the events of 9/11.

In 2008, the Skywalk Memorial Foundation was assembled to find a way to honor the victims of the tragedy. After many meetings, Rita Blitt, a local artist who works at the Kansas City Art Institute, had her sculpture chosen for the memorial and a design for the memorial was announced on July 17th, 2011, 30 years after the disaster. The sculpture, “Sending Love,” is a contemporary portrayal of a couple dancing and was put on top of a cylinder pedestal with the 114 names of the victims that stands at 24 feet tall. After ten years of planning and $550,000 raised, construction began on July 17, 2015 on the 34th anniversary of the collapse and the memorial was dedicated on November 12, 2015.

There was some controversy over both the memorial and the tragedy itself. After the accident, several people sued the Crown Center Redevelopment Corp., a part of Hallmark, for damages as the hotel was partially owned by Crown Center, and the corporation gave out $120 million to survivors. However, Hyatt Hotels Corp. tried to remain clear from the architectural danger they allowed, not paying for damages, and the architecture contracting company hired to build the hotel only fired and had licenses revoked from a few designers who allowed the flawed design to be approved and be constructed. Some of the designers also blamed the steel company who provided the rods that supported the walkway, Gillum-Colaco, for suggesting the design. Also, several survivors had legal clashes as some sued Crown Center Redevelopment Corp. individually, while some lawyers tried making the case a class action lawsuit, which did not go through.

Once the Skywalk Memorial Foundation was created, funding was an immediate priority. The city government of Kansas City, Hallmark, and private donors funded the project, yet Hyatt Hotels Corp. denied funding the memorial when asked by the foundation. Instead, although not involved with the accident, Sheraton gave a donation as a remembrance that they too will honor the history of the recently purchased hotel.