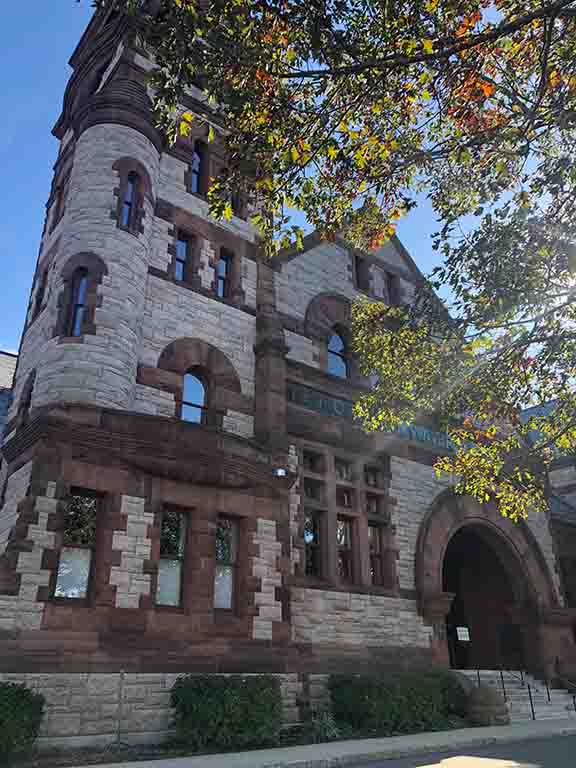 The Allis Engine inside of the Metropolitan Waterworks Museum, standing three stories above and two below the ground floor of the pumping station. 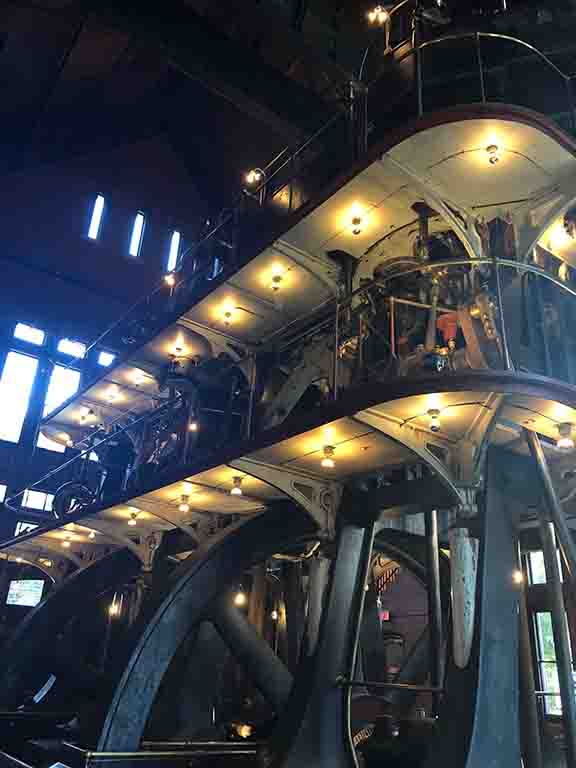 Sitting at the edge of the Chestnut Hill Reservoir, The Metropolitan Waterworks Museum houses the city’s High Service Pumping Station, which was responsible for pumping millions of gallons of water into Boston during the 19th century. The station was built during Boston's Golden Age, from the Civil War to the start of World War I, though the pumps are no longer operating. In 1889 a laboratory was built at the site to study the biology of water-supply sources, the first in the country. Three of the most efficient water pumps of their time, needed for an exploding population and its demand on the city’s water resources, are preserved at the museum.

The station was built in response to the Great Fire of 1872, which destroyed almost eight hundred buildings in 65 acres of Boston’s city center. Along with the resulting damage, the fire made Boston citizens realize their water system was too antiquated for the growing population of the city. City leaders tried to redesign the entire city to be more fire-resistant, but homeowners resisted and rebuilt on top of the previously damaged land. Unable to reconstruct the city, civic leaders decided to rebuild the entire underground plumbing system. The search for clean water led public health officials to more rural areas like Chestnut Hill, where the pumping system was built and opened in 1887.

The building was originally designed by Boston City Architect Arthur H. Vinal, who designed nearly 80 buildings throughout New England. The High Service Pumping Station was built in the Richardsonian Romanesque style, becoming an icon in the city for its unique design. The building’s curved arches, rock-faces granite walls, dark sandstone trim, horizontal massing of sections, and high tower are all facets of the Romanesque style originally introduced to the city by the architect Henry Hobson Richardson. Vinal included sculptures of his own and his wife’s face on the station’s tower. Edmund March Wheelwright, who designed the addition to the pumping station in 1897, was Boston’s last City Architect. He was one of New England’s most important turn-of-the-century architects and responsible for adding a section to house the Allis pumping station.

The Metropolitan Waterworks Museum has preserved three pumps within the station since they were put out of use in the 1970s. Each pump was known for being extremely efficient, making little to no noise while supplying the majority of the city with water. When the pumping station first opened it housed two Holly-Gaskill engines, one of which still stands in the hall today. Each engine was responsible for pumping eight million gallons of water per day. Seven years later, the superior Leavitt pump was installed to join the two Holly-Gaskill engines. The Leavitt pump became lead pump but its unique design demanded constant repairs. It was eventually taken out of service in 1928. The Allis Engine was installed in 1898, the second of three pumps to remain in the pumping station’s halls to this day. The Allis Engine extends three stories above and two stories below the ground level of the pumping hall. Its engine saved fuel and was easy to maintain, causing many engineers of the time to doubt its ability to function at such a fast and steady level. Along with the Allis Engine, the Worthington Engine was a powerhouse in the station. Established in 1922, the Worthington Engine is the only horizontal engine in the pumping hall. It is the smallest engine and easiest to run, though it only pumped at half the capacity of the Allis Engine. The Allis Engine, Worthington Engine, and one Holly-Gaskill engine remain in the pumping house as main attractions of the museum.

The Chestnut Hill Biology Laboratory, established in 1889 as the country’s first lab dedicated to biological water analysis, sits in a building next to the High Service Pumping Station. The laboratory studied all phases of aquatic life and helped ensure clean drinking water across the city. By 1895, the staff had made more than 12,000 microscopic and more than 6,000 bacterial examinations of water samples. The station and lab reside above a web of underground aqueducts and iron water mills, which provided the ideal place to study Boston’s water. The Chestnut Hill reservoir and accompanying pumping station, now preserved as the Metropolitan Waterworks Museum, played a central role in the supply of water to Boston for over a century.