The McCoy House, now a museum operated by the Mifflin County Historical Society, was the birthplace of a distinguished U.S. Army officer named Frank R. McCoy (1874-1954). He served in the Spanish-American War and was a member of the General Staff of the American Expeditionary Force during World War I, where he commanded the 165th Infantry Regiment. The house, which is listed on the National Register of Historic Places, was built in 1843 in the Federal style. The Society assumed ownership and restored it to its original appearance. The house serves as the repository for the McCoy Memorial Collection and the collections of the Society. Visitors will be able to see Victorian period rooms and memorabilia displayed in the house.

The McCoy House was the birthplace of distinguished US Army officer Frank McCoy. 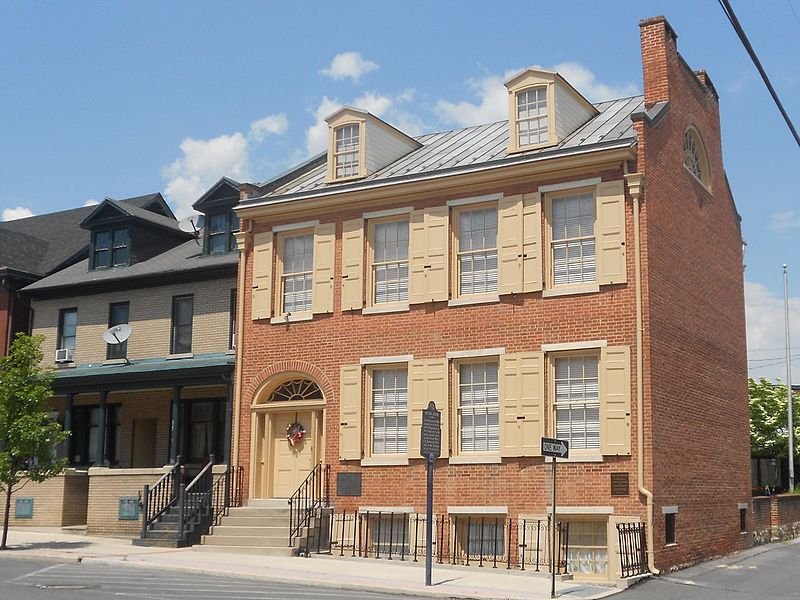 Frank McCoy's father was a brigadier general so it was natural for Frank to follow in his father's footsteps. He attended West Point and graduated in 1897 and was appointed 2nd Lieutenant of the 8th Cavalry Regiment. Not long after, he was transferred to the 10th Cavalry Regiment, which was sent to Cuba to help in the fight against Spain during the Spanish-American War. He was wounded during the battle of San Juan Hill (July 1, 1898) but was tended to by Leonard Wood, a lieutenant colonel of the Rough Riders (the military unit led by future President Theodore Roosevelt), who would later appoint Frank as aide-de-camp.

In the coming years, McCoy served in a variety of positions and rose in the ranks. By 1902 he was first lieutenant and became a junior aide to President Theodore Roosevelt. McCoy then served under Wood in the Philippines and became captain. He participated and led campaigns against the Moro people, who resisted American occupation of the Philippines. After returning to the U.S. in 1906, McCoy was assigned to the Peace Commission to Cuba; became an aide to William Howard Taft, who was provisional governor of Cuba; a senior aide to President Roosevelt; and other positions.

During WWI, Frank was assigned to the General Headquarters of the American Expeditionary Force, where he assumed command of the "Fighting 69th Regiment of the Rainbow Division" and then later the 63rd Infantry Brigade.

After the war, McCoy was given other assignments, including diplomatic ones. He became Chief of Staff of the American Military Mission to Armenia; supervised the American relief mission to Japan after the earthquake of 1923; commanded the 3rd Infantry Brigade and 1st Field Artillery Brigade; helped supervise elections in Nicaragua; and was a member of the Lytton Commission that investigated Chinese and Japanese claims over Manchuria. He retired in 1938 but was asked to serve on the commission that investigated the attack on Pearl Harbor, which brought America into WWII. After the war, McCoy was asked to serve as chairman on the Far Eastern Commission, which developed policies Japan would need to follow during its military occupation after the war. McCoy passed away on June 4, 1954.