The Garden of Peace

Established in 2004, the Garden of Peace is located next to the 100 Cambridge Street Building plaza, serving as a place to remember victims of homicide. The garden was created by members of Parents of Murdered Children organization for the purpose of commemorating the lives lost to homicide in Massachusetts and raising awareness about the tragic impact of violence. Located in a serene environment, the garden serves as a site for families and friends to grieve the loss of their loved one and find hope to move forward from the devastating loss. The names of victims are engraved into river stones, and the central statue, “Ibis Ascending”, symbolizes hope for victims and their loved ones. As more stones with names of victims are added to the memorial, they serve as a reminder to Massachusetts communities of the tragic price of violence.

This image captures the entrance to the Garden of Peace memorial. The statue seen in the center is "Ibis Ascending." 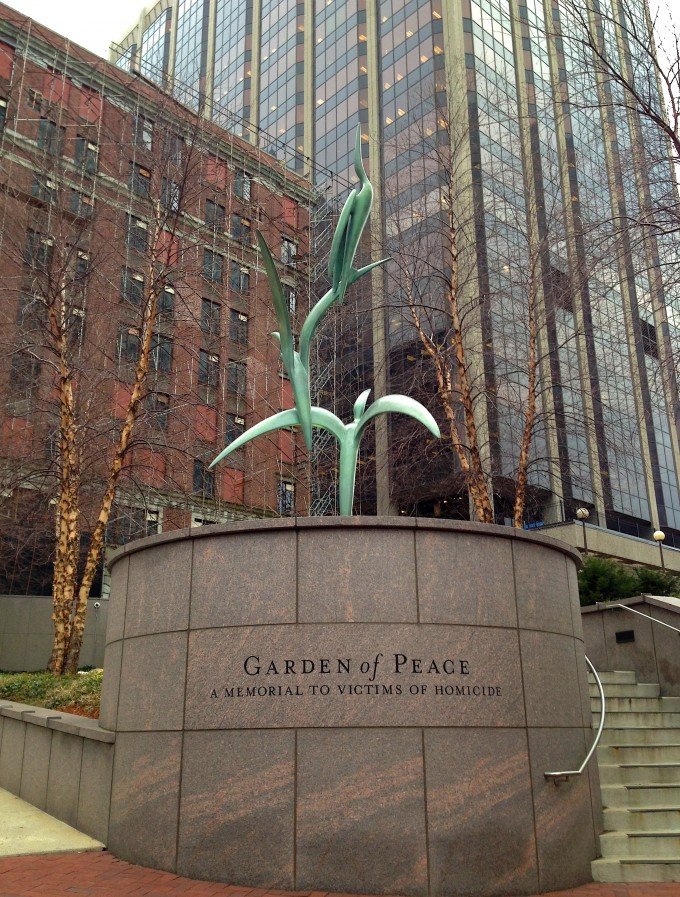 Paul Rober, a member of the Parents of Murdered Children organization, was first inspired to create a memorial for homicide victims after the tragic loss of his own son. Having lost his son to homicide, Rober found strength and hope by joining a community of individuals who have also lost their children as a result of violence. The support he gained from this community inspired him to create a memorial for his son and other victims of violence. This memorial would serve as a place where others who have also been impacted by violence can reflect upon the tragedy they have experienced and find the strength to move forward from it. Along with others in the organization, Rober began the planning process for the Garden of Peace memorial. The purpose of this site would be to provide a place for families and friends to honor their lost loved ones, bring hope to those impacted by the devastating loss of homicide, and raise awareness in Massachusetts communities about the significance of working towards building safer and more peaceful neighborhoods.

Rober and his supporters at the Parents of Murdered Children organization began the initial stages of creating the Garden of Peace by hosting fundraisers for the memorial. Throughout the fundraising process, more individuals joined Rober and volunteered their time to help transform this idea into reality. Among these individuals was Beatrice Nessen, who would become more involved further along the planning process. Rober approached Governor William Weld with his proposal for the garden. Weld, who was very supportive of Rober’s idea for the memorial, agreed to set aside state-owned property for building the memorial. Unfortunately, Rober passed away from illness during the early stages of the planning process. Soon after Rober’s death, however, Beatrice Nessen assumed the role of leading the project.

The garden was designed by Catherine Melina, a student at Harvard Graduate School of Design, who donated her design for the garden and remained as the design consultant for the project during the construction process. In her layout for the garden, Melina chose to honor individuals who died from homicide through a riverbed of stones engraved with the names of victims. Each stone is different, symbolizing the individuality of each victim being memorialized. The streambed is dried out, indicating the loss of life as a result of violence. Along the streambed, Melina included resting areas for the families and friends of victims for quiet visitation and contemplation. The trail of stones in the streambed leads to a pool of water that transforms into a waterfall, symbolizing renewal and cleansing from the tragedy of violence. The statue, “Ibis Ascending”, emerges from the waterfall, symbolizing hope and strength for families, friends, and communities hurt by the loss of loved ones. “Ibis Ascending”, a statue of a bird flying towards the sky, was sculpted by Judy Kensley Mckie who had also lost her own son to violence. This sculpture fulfills the memorial’s purpose of instilling hope for a future of peace and justice for the victims of homicide.

The primary funding for the Garden of Peace came from donations. The Mass Development Financial Agency was a major contributor, donating $200,000 for construction.  The names of other donors are inscribed on the Wall of Recognition that stands at the entrance to the memorial, with the names of donors who contributed the most money engraved largest on the wall.

After years of planning, the Dedication Ceremony at the garden was held on September 24, 2004. Every year, new names of homicide victims are engraved into river stones during the commemoration ceremony, and family and friends of victims are given the opportunity to remember their lost loved ones. The stories of these victims of violence are read aloud to preserve their memories. This helps to keep the stories of those who died alive by reading their personal stories and remembering them in a positive light. This is essential for fulfilling the memorial’s goal of providing those who lost someone to homicide with the strength to move forward from the tragedy while also honoring the individuals who died.

The Garden of Peace also extends ts anti-violence initiative through community programs that promote individuals to consider how violent actions hurt communities as a whole, campaign against domestic and sexual violence, and educate communities about the need for better gun control. This initiative relates to the memorial’s purpose of providing hope for the families of victims by creating positive change in an effort to reduce violence in communities.