Bold Face Park opened in 1918 on the site of a previous municipal dump. Since 1918 it has remained a staple of the community as a gathering place for children and families to enjoy leisurely activities. The history of the park is rich with lore, ranging from stories of Pete Rose to those of Native American Chiefs. In the present day, it is managed by the Cincinnati Recreation Commission.

This limestone structure built in 1918 once held changing rooms for the two pools which flanked the structure. 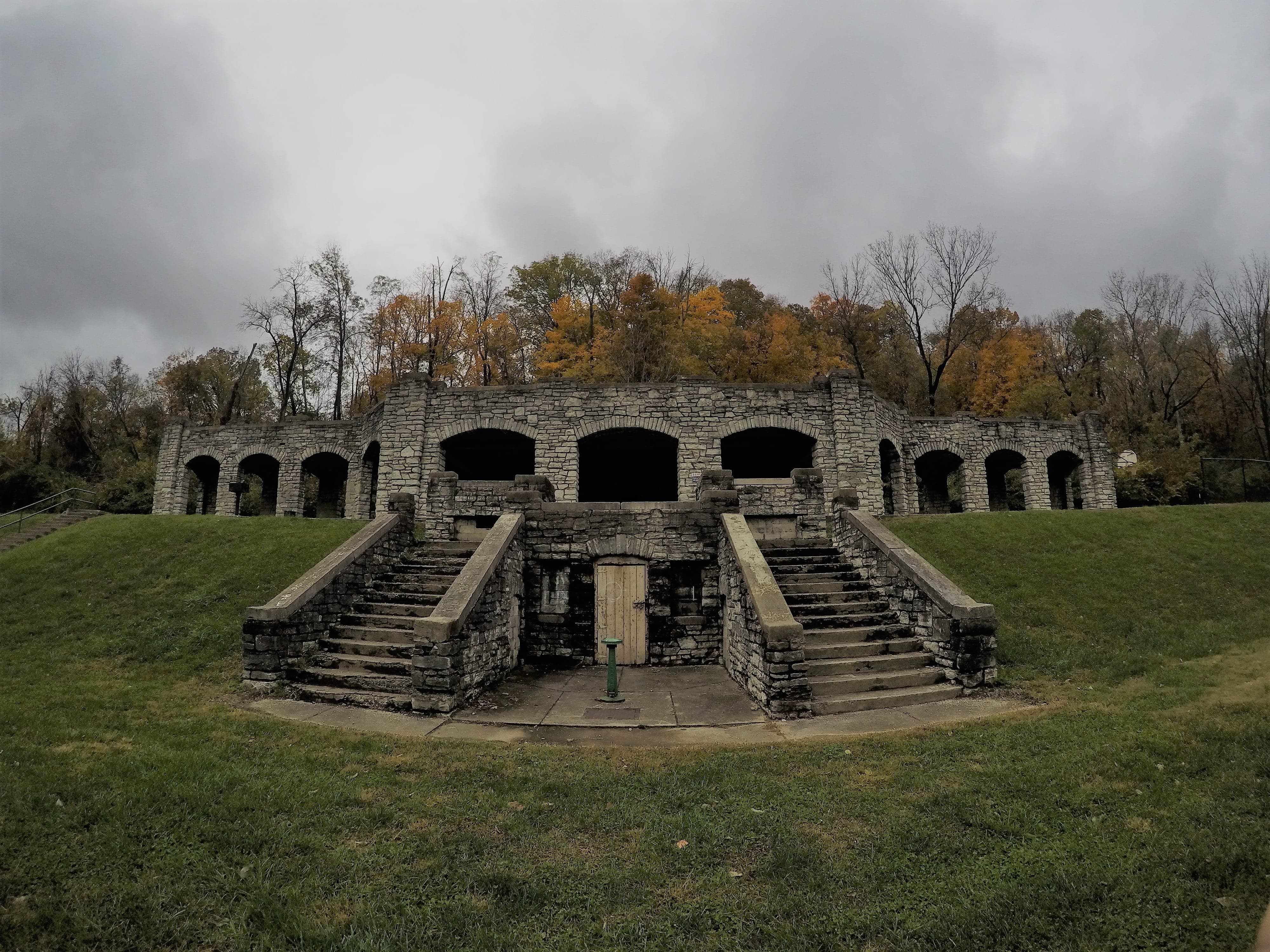 Standing at the top of the stairwells, the remaining buildings on Sedam Street, Steiner Street, and Delhi Street can be seen in the distance along the edge of the hill that leads to Mt. Echo Park 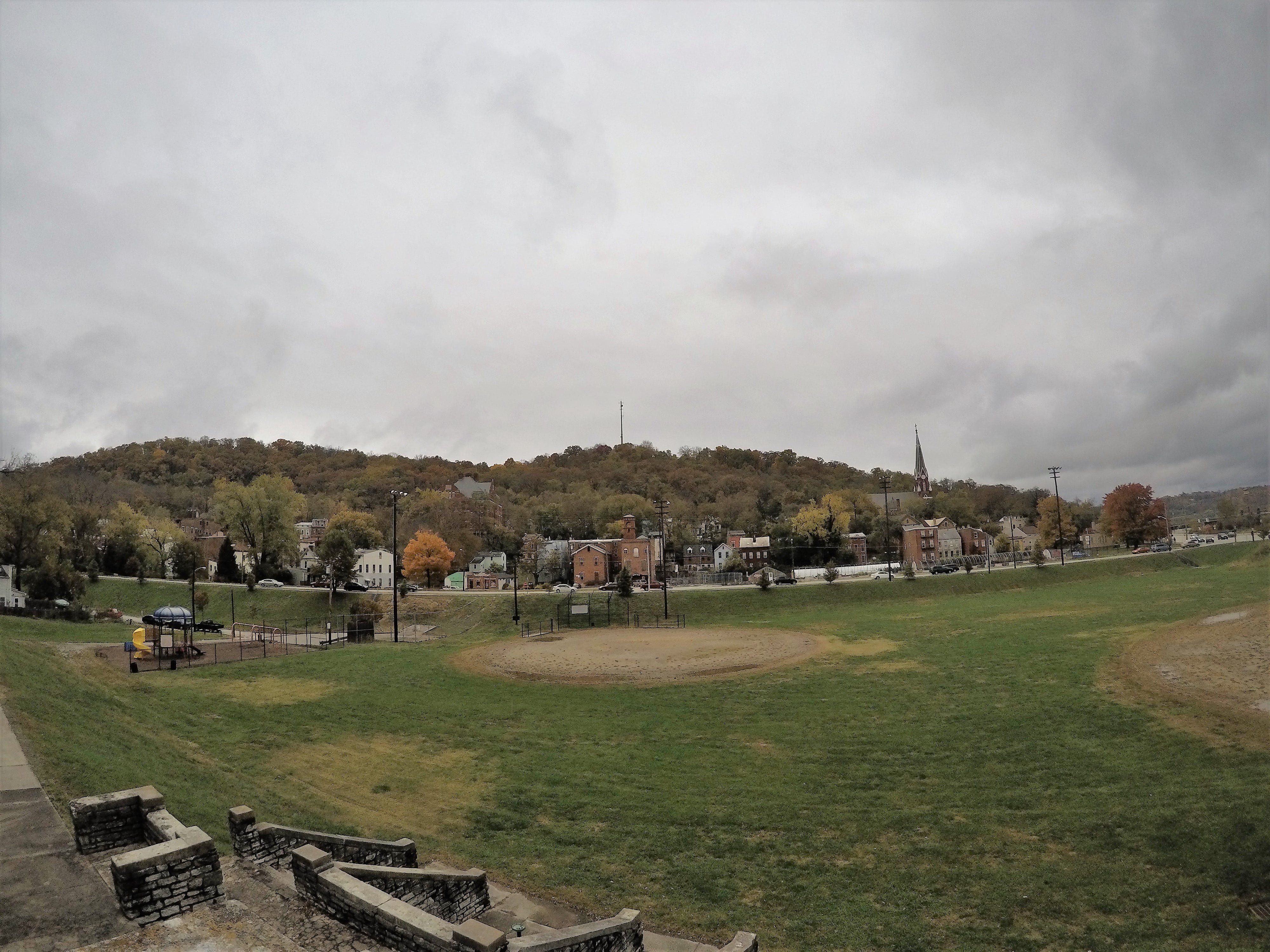 Patrons of the swimming pool would have entered the structure through these walkways. A sign on the eastern face of the structure warns against entering the building due to risk for falling concrete 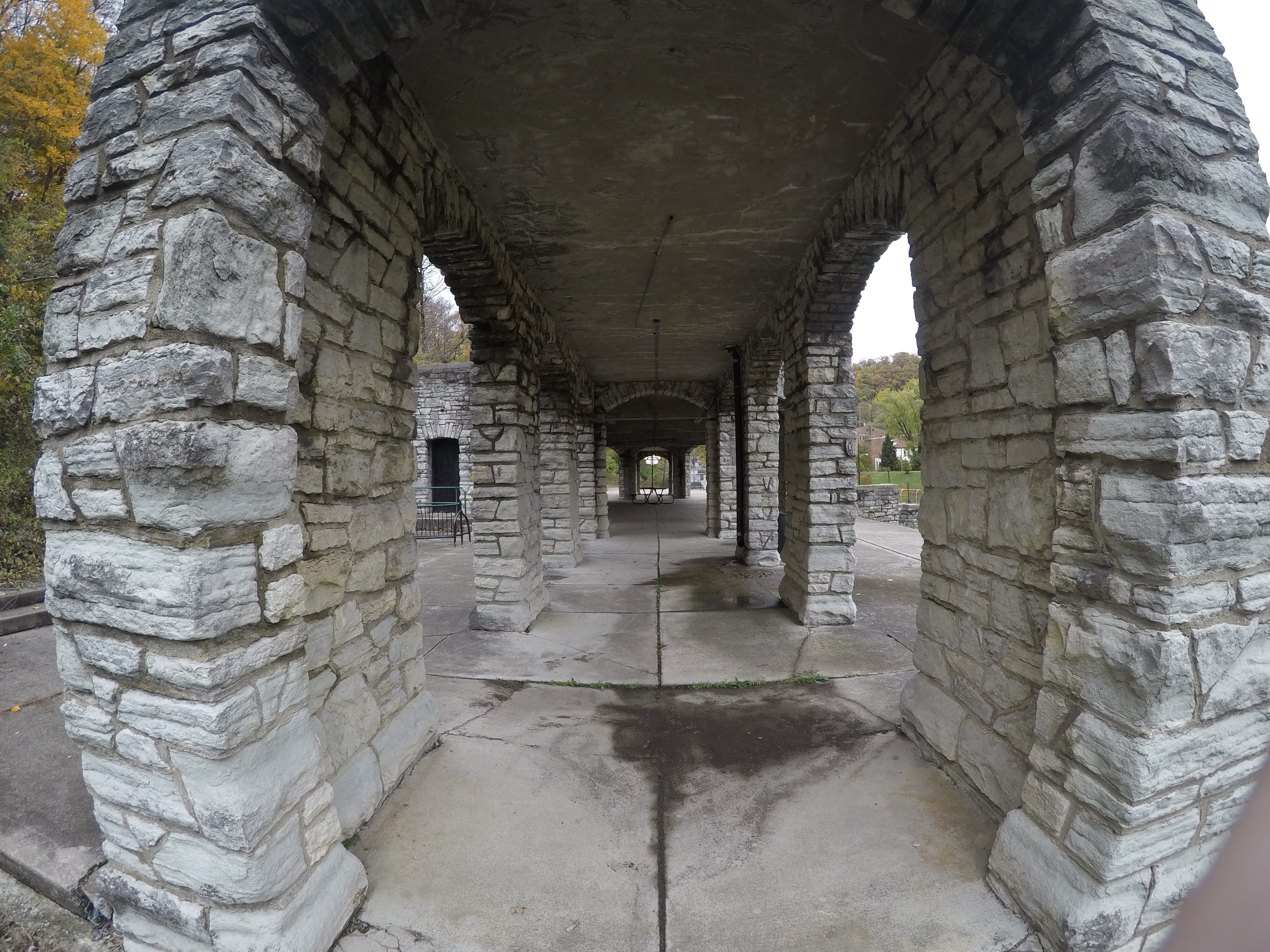 Fairbanks Avenue, leading to Price Hill, sits at the top of this staircase. Both Fairbanks Avenue and River Road were raised 15 feet to prevent flooding during improvements. The elevation of the roads is indicated here. 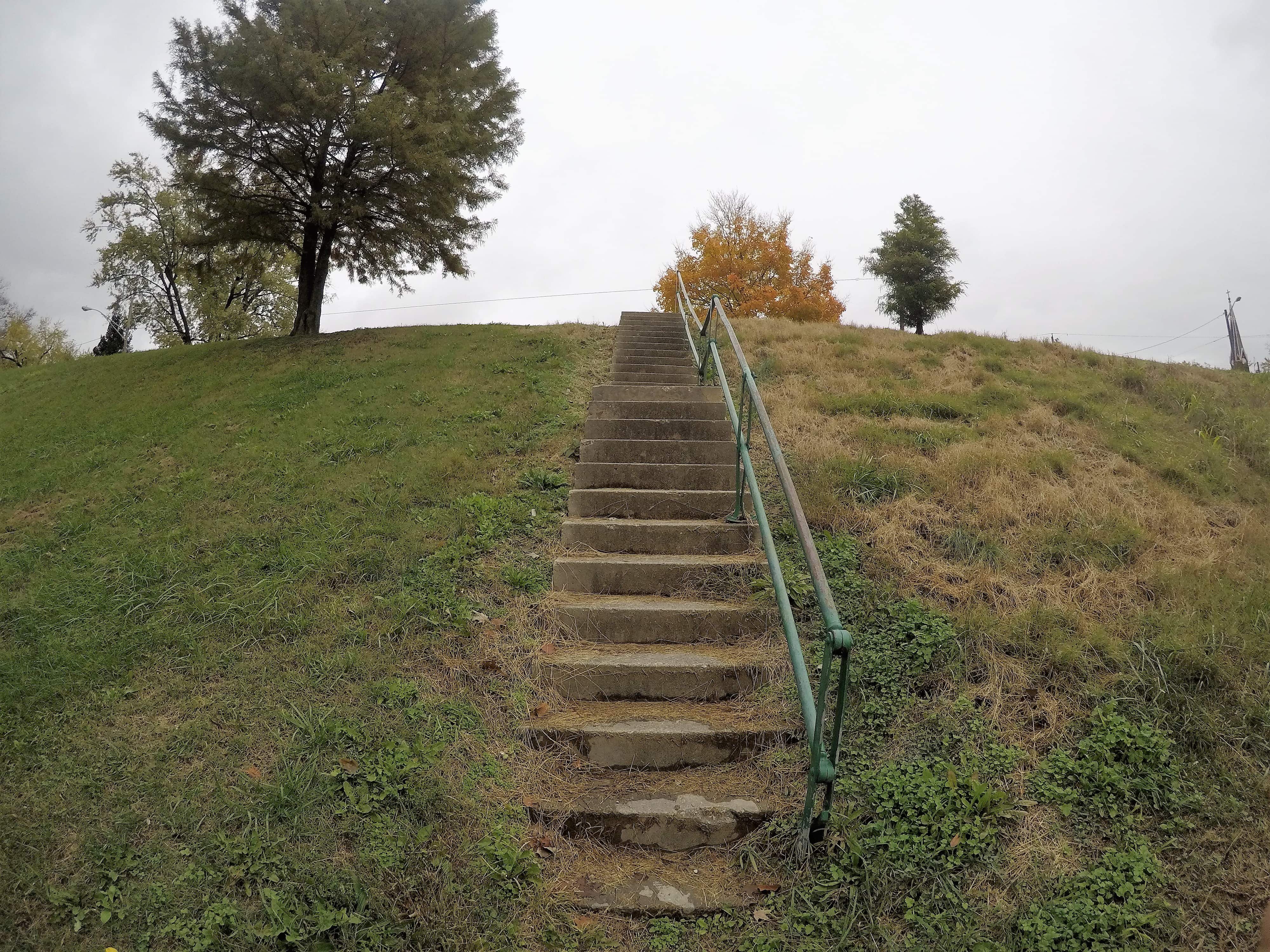 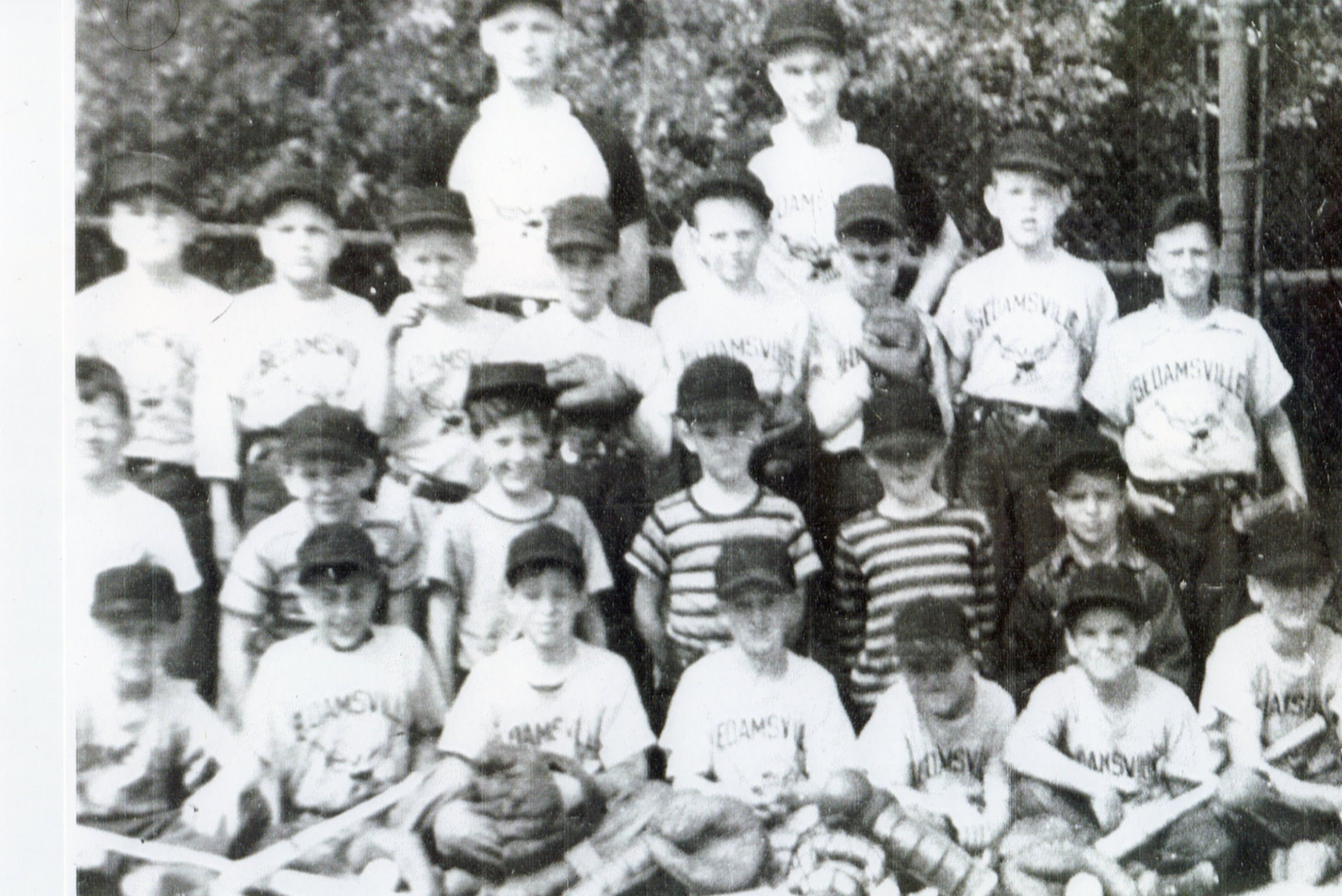 Before it was a park, the eight acres of land on the western side of River Road was a municipal dump. In 1918 a local businessman and City Councilman by the name of Alex Patterson lobbied for the dump to be transformed into a public park. The park would go on to host a range of leisure activities, many of which were derived from the public pool and baseball fields which stood along Bold Face Creek. On the western edge of the park, a large stone structure remains as the only remnant of the public pool that once drew local children to the park during the summer months. The limestone shelter once held bathrooms and changing rooms for the two pools, which have been filled in and covered with grass.

Among the patrons of Bold Face Park was Cincinnati Reds legend Pete Rose. Rose would spend childhood summers in the home of his grandmother Eva, whose home adjacent to Bold Face Park provided young Pete Rose with nearly unlimited access to the ballfields. When talking to local Sedamsville residents who grew up in this era, stories of Pete Rose are abundant.

Yet, even with the range of activities and famous faces that graced that the park over the years, arguably the most interesting part of the park was the name itself. In Cincinnati: A Guide to the Queen City and Its Neighbors, 1943 a compilation of essays written by the Writers’ Program of the Work Projects Administration describes the origin story of Bold Face Park. The writers describe that the park was likely named, in part, for the rocky bluff that stands along the western edge of the park. Yet, they also suggest that the park was named for the Miami Chief Boldface, who came in contact with Jacob Wetzel, a woodsman who called Sedamsville home. According to legend, the encounter between Boldface and Wetzel took place on October 10, 1790. While hunting turkeys near Lick Run, was attacked by a Native American. After fighting, and killing, the Native Warrior, Wetzel heard the rumblings of a band of Natives who came looking for their fallen comrade. In an effort to avoid certain death, Wetzel made his escape in a dug out canoe that he came across in the inlet of Yeatman’s Cove on the Ohio River. As he paddled to safety, Wetzel heard cries of anguish from the band of Natives, who had certainly discovered their fallen leader: Chief Boldface

CINCINNATI A Guide to the Queen City and Its Neighbors. American Guide Series. Cincinnati, Ohio. The Wiesen-Hart Press, 1943.