"Orpheus," also called "Orpheus with the Awkward Foot," was sculpted by Charles H. Niehaus in 1916 for the 100th anniversary of "The Star-Spangled Banner." This song, which became the national anthem in 1931, was written by Francis Scott Key, an American laywer, author, and poet, during the War of 1812. He was inspired after witnessing the events of the Battle of Baltimore from inside a British ship. This sculpture was placed within the Fort McHenry National Monument and Historic Shrine and moved to its current location in 1962.

Despite being titled "Orpheus," many people mistake this to be a sculpture of Francis Scott Key himself. From The Historical Marker Database. 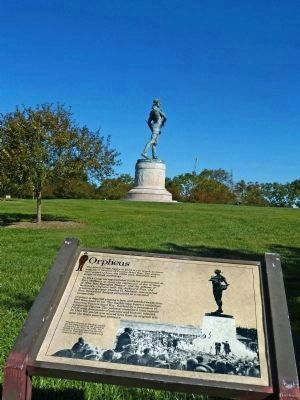 The base of the statue contains lightly sculpted images of Francis Scott Key, as well as other important figures from Greek mythology. This type of light sculpting into a horizontal medium is called a frieze in light relief. From The Historical Marke 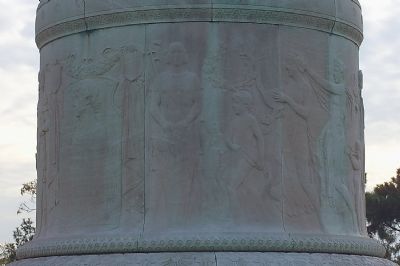 Francis Scott Key was alive from August 1, 1779 until January 11, 1893. He lived most of his life in Frederick, Maryland. He is most well-known for creating "The Star Spangled Banner," though he was primarily a lawyer in his lifetime. From National P 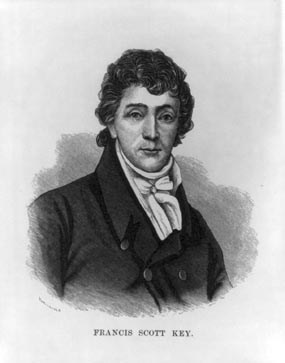 Orpheus is located within the Fort McHenry National Monument and Historic Shrine in Baltimore, Maryland. The statue itself, made entirely of bronze, is approximately 24 feet tall, and it rest on a marble base. Including the base, the monument stands at about 40 feet. Orpheus is depicted naked, as most Greek statues were, while playing a five-stringed tortoise-shell lyre. Though Orpheus, known in Greek mythology for his virtuosity in music and poetry, is the muse for this sculpture, it does not represent anything relating to him or Greek mythology. The statue was erected as a symbolic commemoration of the Battle of Baltimore in the War of 1812. More specifically, it represents the composition of the Star-Spangled Banner, which would go on to become America’s national anthem in 1931.

The War of 1812 took place between the June 1812 and February 1815. It was a war between the United States and Great Britain, caused by Britain’s attempts to restrict oversea trade and America’s desire for more North American territory. The Battle of Baltimore, also known as the Battle of North Point, was fought near the end of the war, in 1814 on September 12-15. It was a battle of both land and sea, with the Americans fighting to keep the British from taking Baltimore and Fort McHenry. Two American men, lawyer Francis Scott Key and British Prisoner Exchange Agent Colonel John Stuart Skinner, boarded the British Ship HMS Tonnant to negotiate the release of American prisoners. However, the battle began while they were on board, and they became detained on the ship. They were prisoners for the entire night. In the morning, Key was still able to see an American flag flying in the distance, signaling that his country had been victorious. It was because of this that, once they were released, Key wrote a poem called “Defence of Fort McHenry,” which he later set to the tune of British drinking song “To Anacreon in Heaven.” It was published on September 20, 1814, and it spread like wildfire across the country, though it became known nationwide as “The Star-Spangled Banner.”

In 1914, the government wished to commemorate Key’s victory song in some way. They chose to offer $75,000 to create a sculpture, which would be chosen through a nationwide contest held by the Fine Arts Commission. The competition began on May 28, 1916. Out of thirty-four entries, Charles H. Niehaus’ design, titled Orpheus with the Awkward Foot, was selected. Niehaus, born in the U.S., had studied art in Munich, Germany, as well as Rome, Italy. He returned to America in 1885 and gained a reputation nationally for his work on the doors of the Library of Congress in Washington, D.C., and the Astor Memorial doors of Trinity Church in New York City. Though the contest was finished in 1916, the dedication was delayed until after World War I. The sculpture was officially dedicated on June 14, or Flag Day, of 1922. President Warren J. Harding was in attendance, and his speech is famous for being the first live radio broadcast that reached coast to coast.

The sculpture was originally placed right in the entrance to Fort McHenry, surrounded by a circular road. Later, it was given its own field within the Fort McHenry National Monument and Historic Shrine. The statue was moved there in 1962, and the time capsule containing historical and patriotic documents was unveiled. Small trees have been planted in proximity to its current location to honor heroes of the war, such as George Washington.