Imagination Station, an interactive science center, opened in 2009. Imagination Station was conceptualized after its predecessor, COSI Toledo (located in the same building) closed in 2007. The science center features both temporary exhibits, like “Guitar: The Instrument That Rocked the World,” and permanent exhibits, like the new “Simulator Theater Experience – Over the Edge.” It also partners with local universities and organizations to introduce children and young adults to STEM fields. Imagination Station welcomes over 200,000 visitors each year. 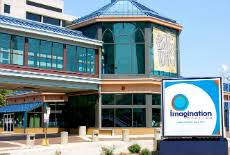 The Imagination Station is located in what was originally the Portside Festival Marketplace. The two-level mall opened in 1984 and lost millions of dollars. It was over twenty-five percent vacant when it closed in 1990. After a multi-million-dollar renovation, Portside was converted to COSI Toledo, a branch off of the original COSI in Columbus. The hands-on science center opened in March 1997 and hosted millions of visitors before it closed in December 2007. Lucas County residents hated to see COSI Toledo go, however, so they voted to approve a levy that would fund a new center, which was known temporarily as the Toledo Science Center. The name “Imagination Station” was chosen from thousands of suggestions from the public.

Imagination Station opened on October 10, 2009. The center showcases permanent and temporary exhibits, such as “Titanic: The Artifact Exhibition.” One of the more recent permanent exhibits is the IDEA Lab, which includes a Tinkering Space for guests to come up with their own inventions. Seven years after its opening, Imagination Station was honored twice: locals voted to renew the center’s operating levy, and they were a finalist for the IMLS National Medal for Museum and Library Service.