Nestled on a shady lawn between the Burns Library and the northern entrance to Boston College sits the 9/11 Memorial Labyrinth and Veterans Memorials. Together, they form a site memorializing 232 lost alumni. In the attacks on the World Trade Center on September 11, twenty-two alumni were lost and are memorialized in a labyrinth styled after many found in churches across Europe. The Veterans Memorial wall commemorates the loss of two hundred ten alumni who were killed in the line of duty since the First World War.

A panorama of the 9/11 Memorial Labyrinth and Veterans Memorial

Street view of the two sites 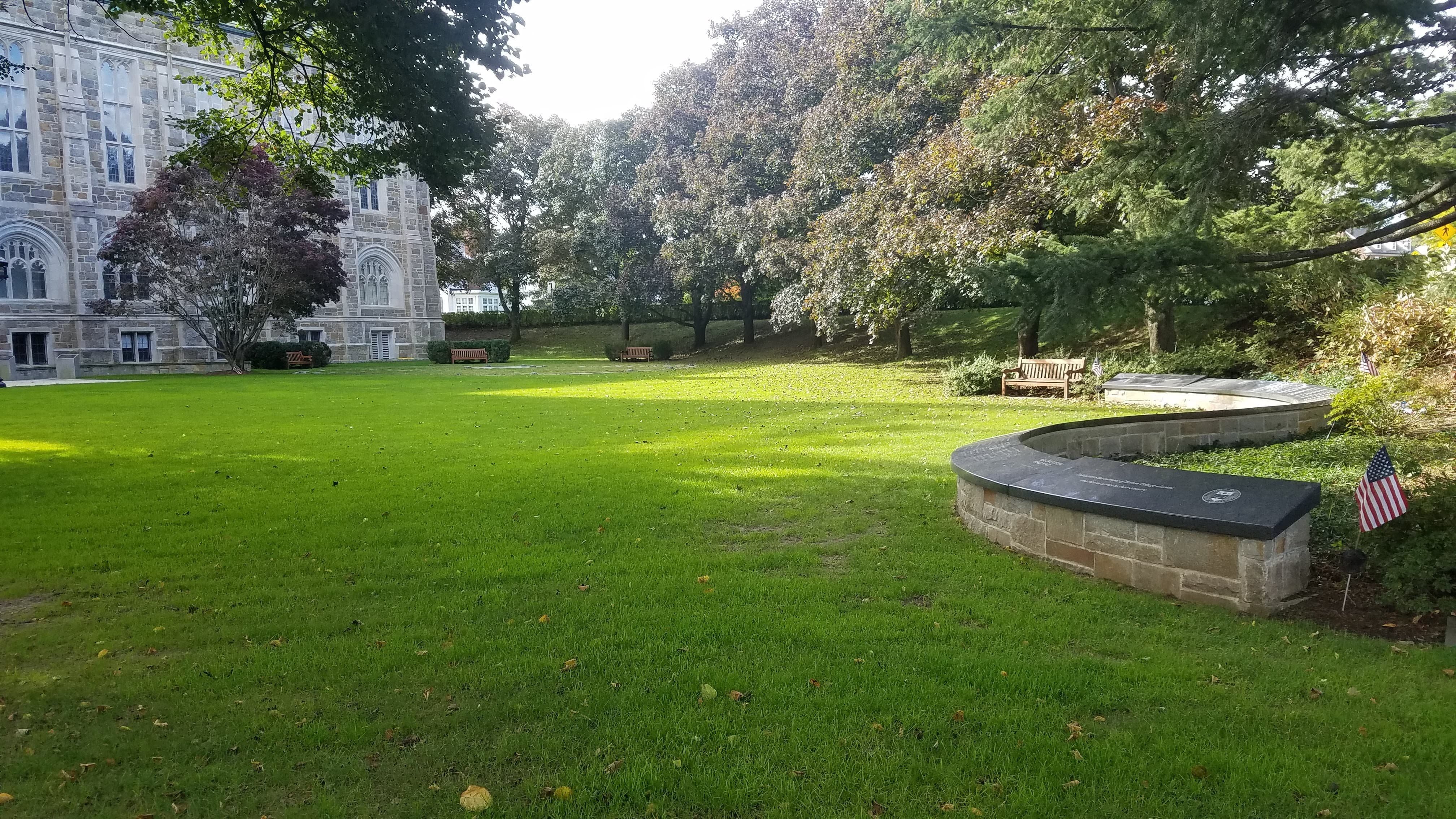 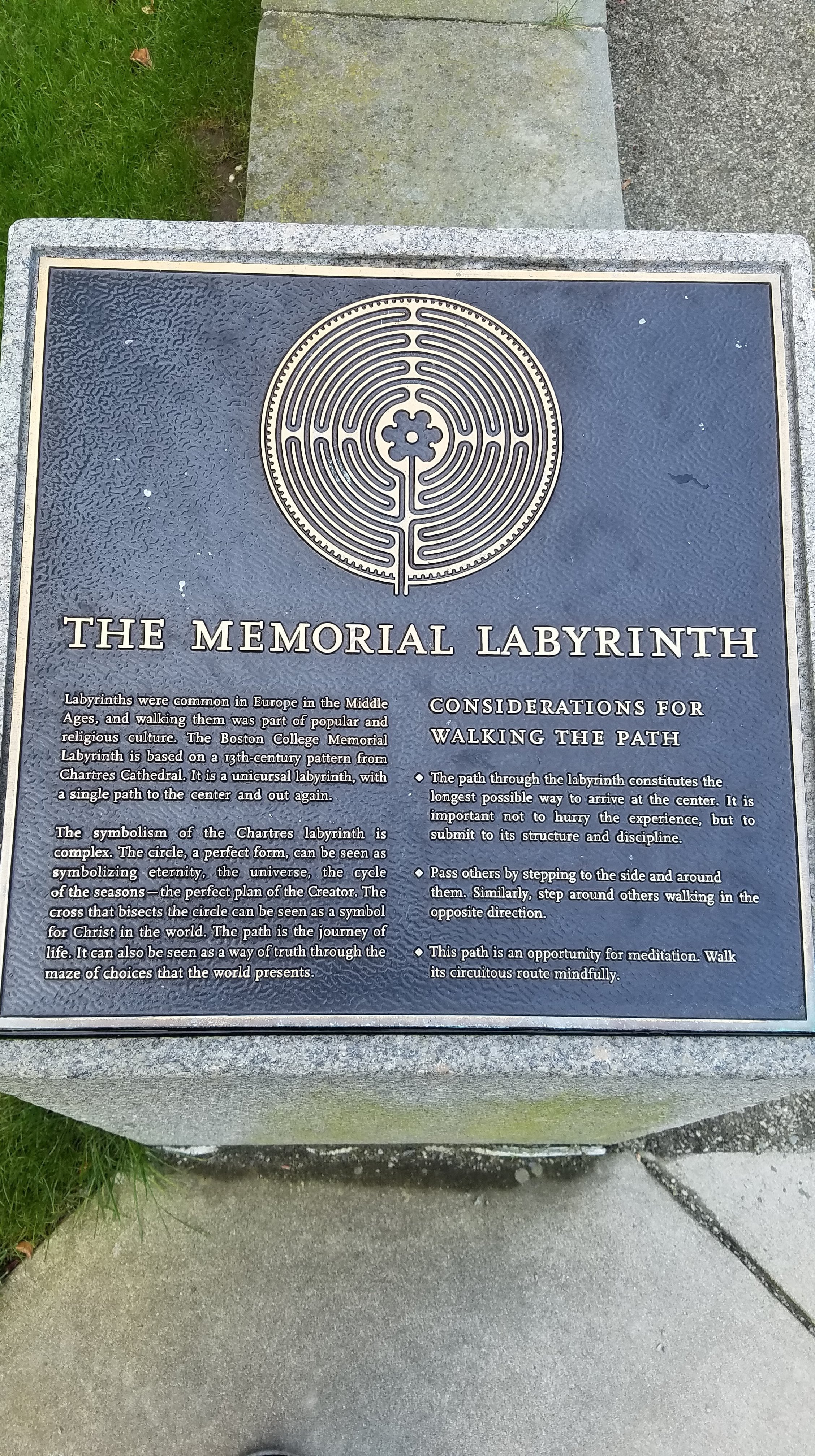 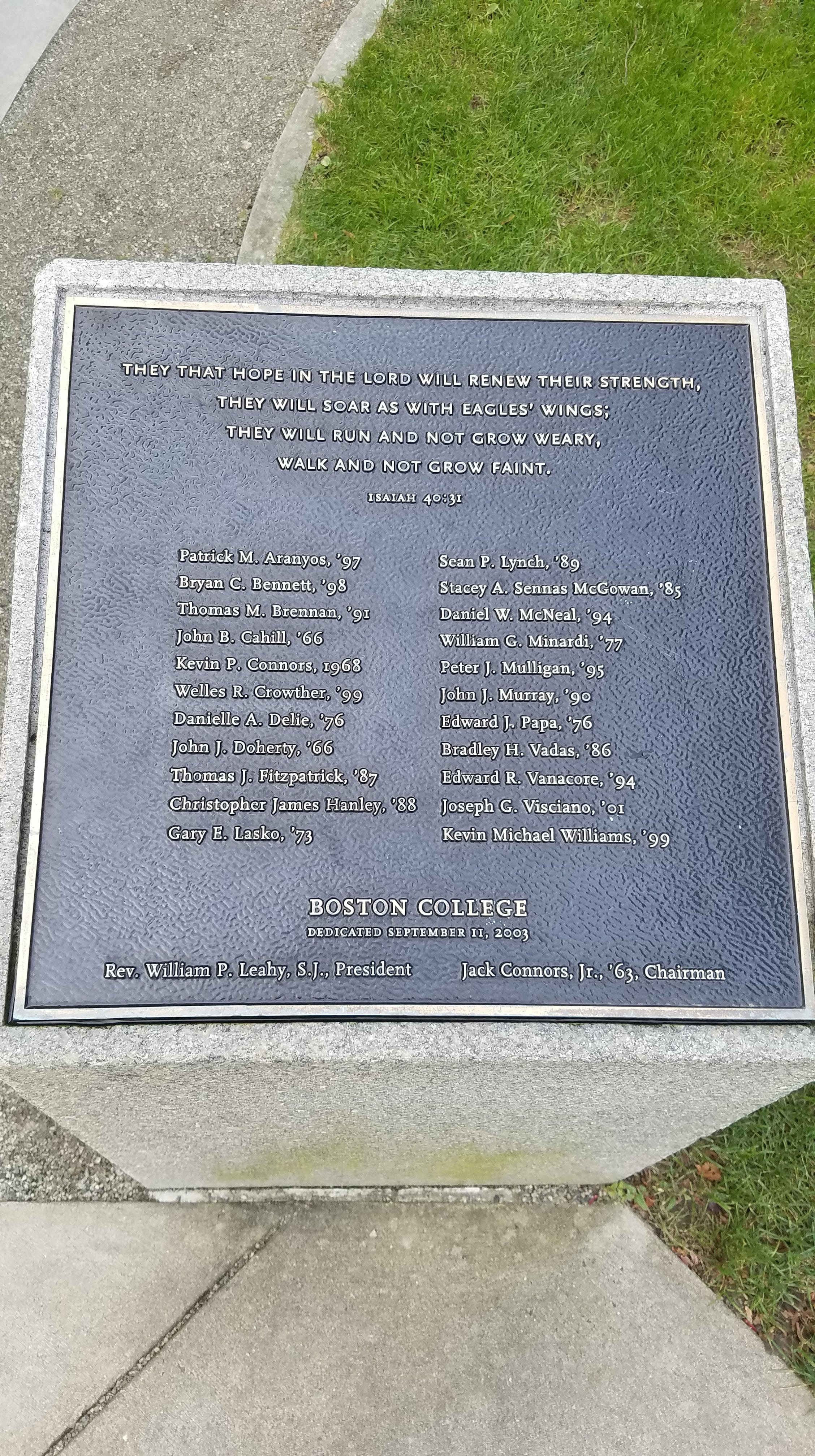 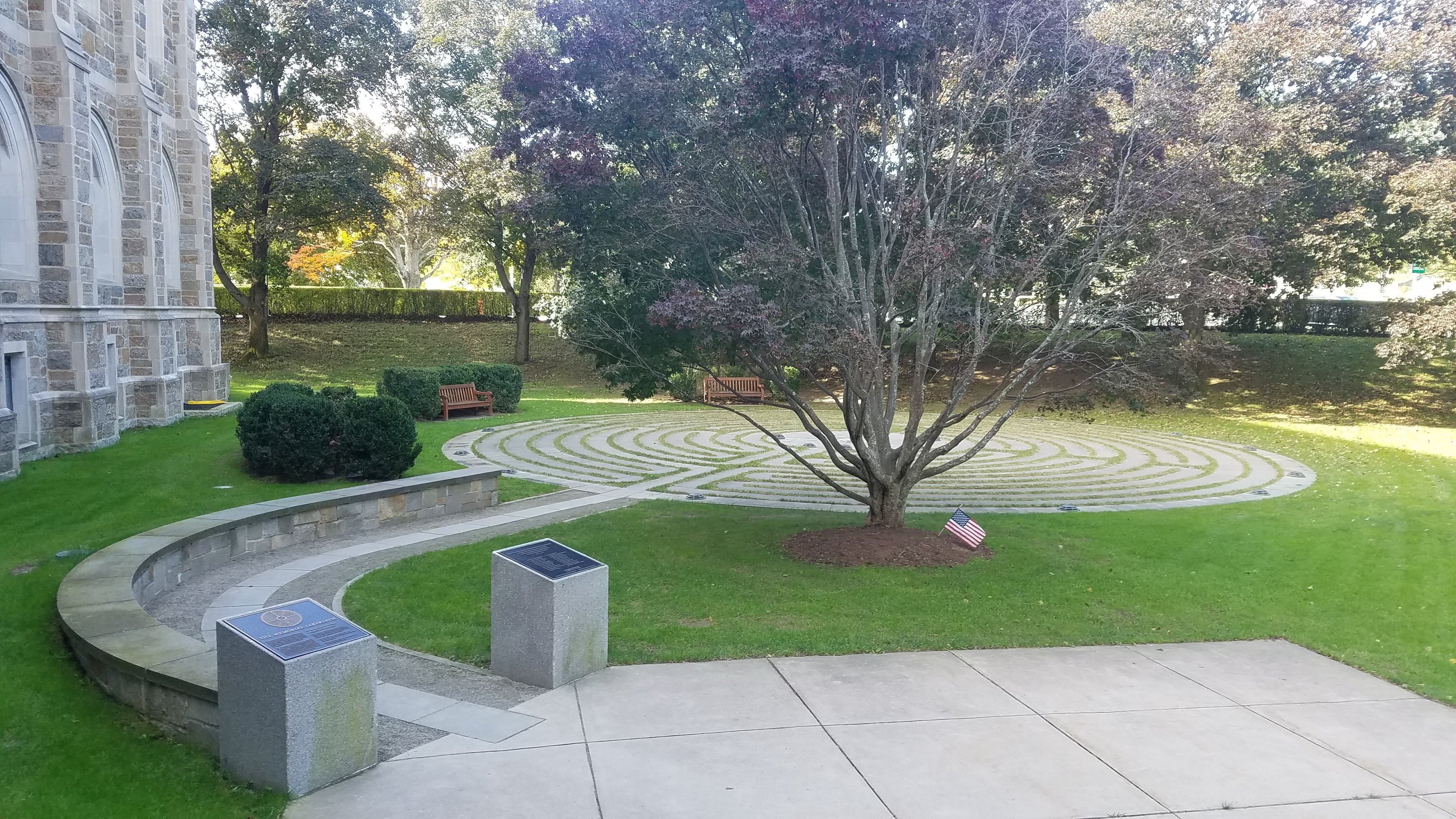 Close up of the labyrinth path 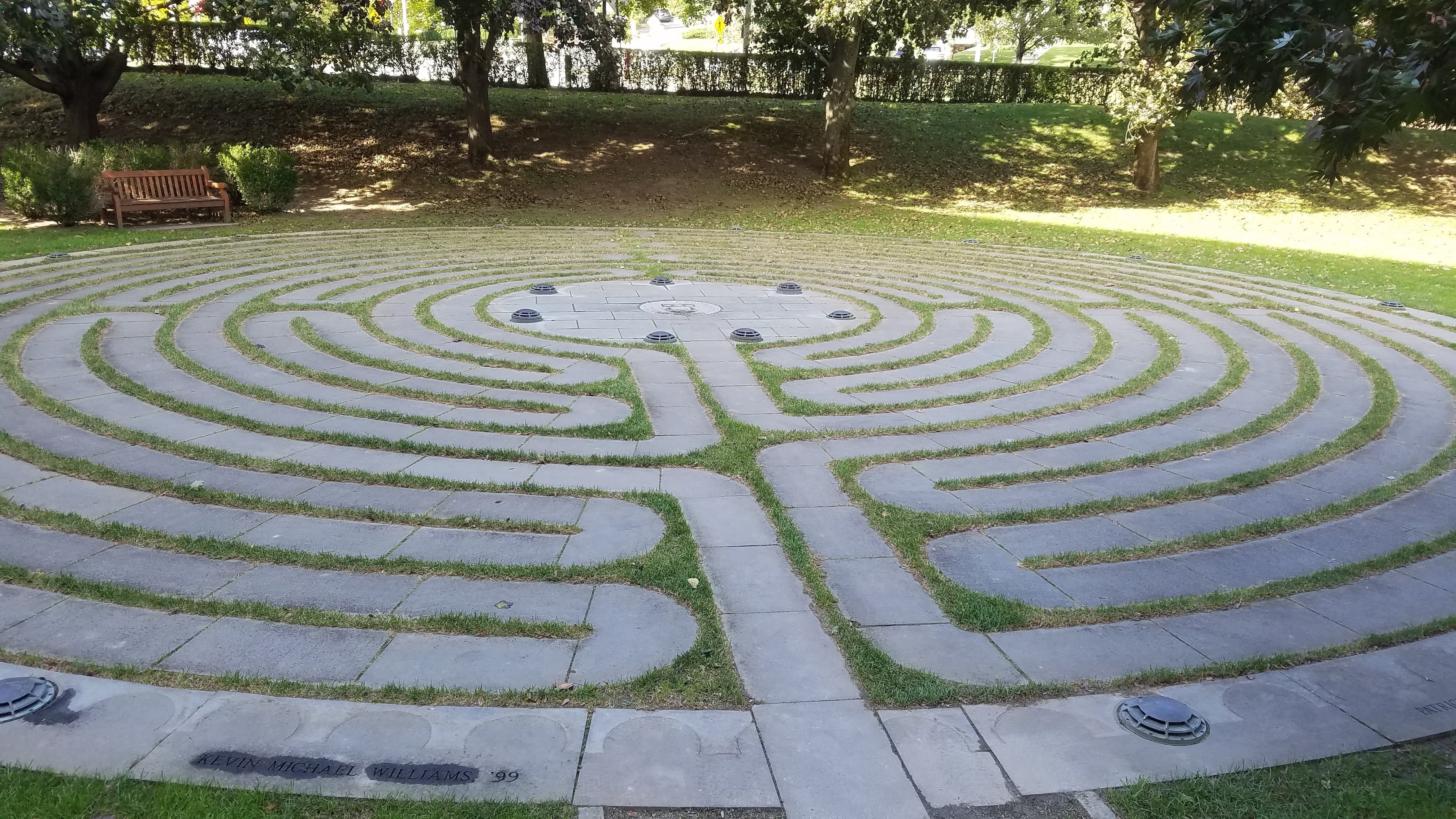 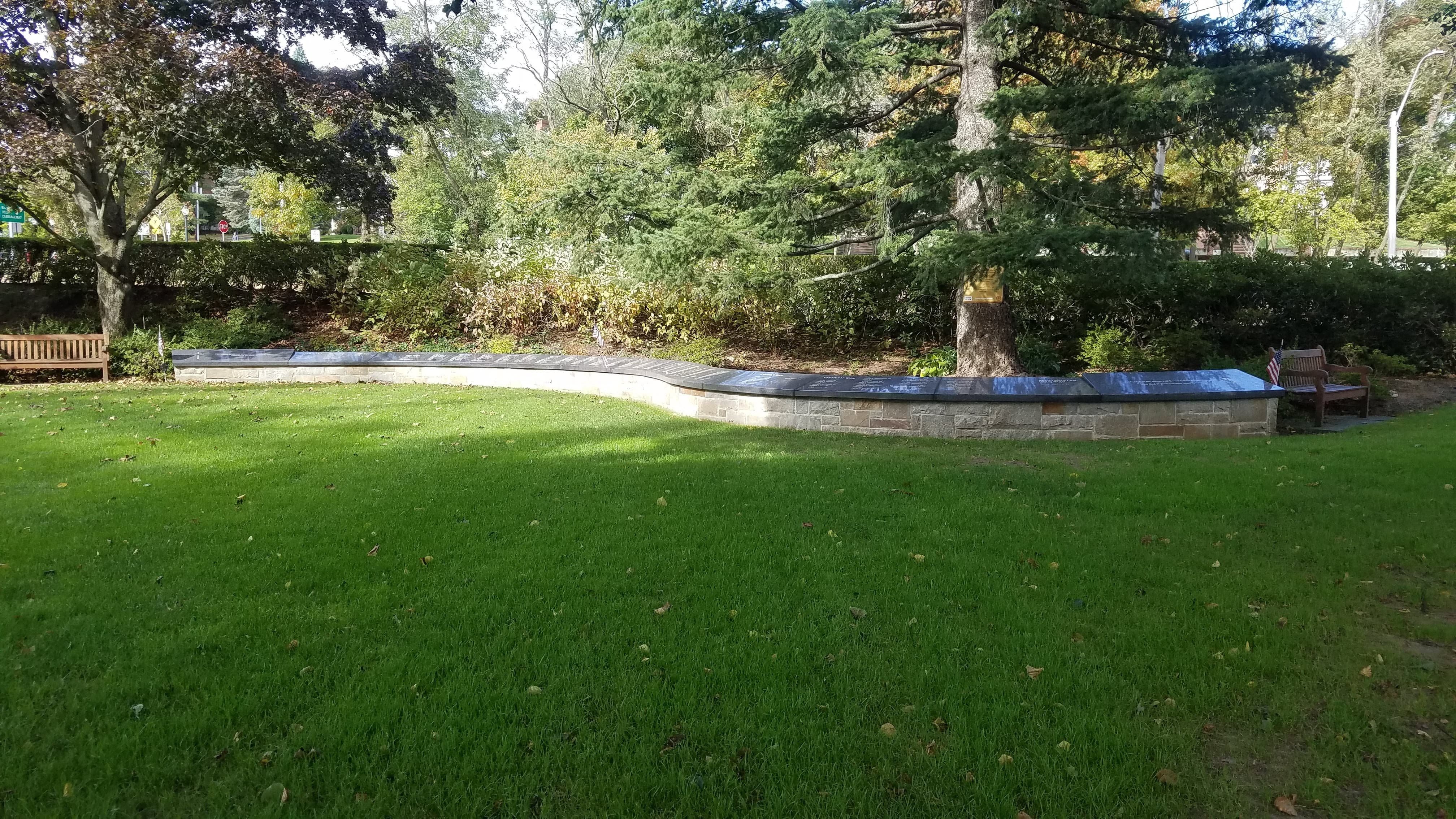 Dedication of the memorial wall 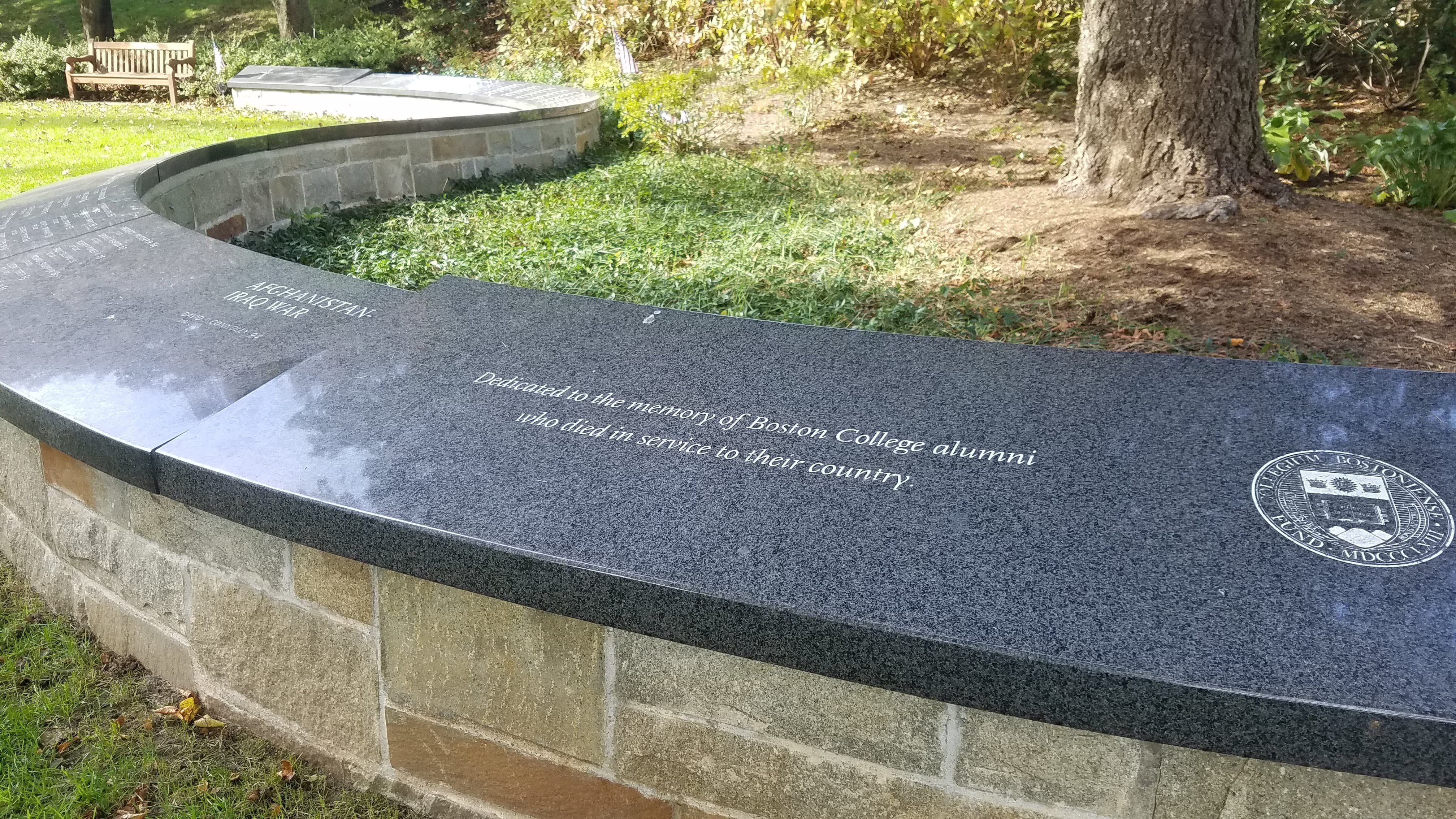 The Boston College 9/11 Memorial Labyrinth was commemorated September 11, 2003, in honor of the twenty-two alumni who were killed that day. The labyrinth was chosen for its religious significance, especially in pilgrimages when church goers could not make it all the way to Jerusalem. They are meant to be walked through in a slow, methodical, respectful manner, either praying or meditating. Each fall, there is a ceremony in the mass surrounding the events to celebrate their lives.

The September 11 Attacks were the worst terrorist attacks the United States have ever seen with a death toll of 2,996 people and cost billions of dollars in damage. The plot started in the mid-1980’s when the mastermind, Khalid Sheikh Muhammed (KSM) planned to blow up planes in Asia that were bound for the US. This plot known as “Bojinka” was ultimately unsuccessful after it was uncovered by police before anything serious happened. Nevertheless, this laid the ground work for the attacks on US soil. In 1996, KSM met Osama bin Laden, the leader of the terrorist group al-Qaeda, where he pitched his idea of hijacking planes in the US and crashing them into important targets. Bin Laden used his resources to rally al-Qaeda around the idea while KSM finalized the plan. In total, they used nineteen hijackers to hijack four different airliners bound for the west coast and laden with fuel; American Airlines flight 11 and United Airlines flight 175 departed from Boston, United Airlines flight 93 departed from Newark, and American Airlines flight 77 departed from Washington, D.C.

Flight 11 hit the north tower at 8:46am, 17 minutes later, flight 175 hit the south tower. The south tower stood for just short of an hour before collapsing at 9:59am, followed by the north tower 29 minutes later. Meanwhile, flight 77 had taken off from Dulles in D.C. and at 9:37am, reached the terror group’s third target, the Pentagon, crashing into the southwest side of the building. The final plane, flight 93 bound for Sand Francisco, never reached its target. It took off later than the rest of the planes and received phone calls from family and loved ones telling them about the tragedies unfolding around the country. After the terrorists gained control of the plane, a group of passengers heroically charged the cabin to wrestle to controls away from the terrorists. Failing to gain proper control of the plane, flight 93 ended up crashing in the fields outside the town of Shanksville, Pennsylvania. Although there has been much speculation about the target of this flight, there has been no conclusion about where this plane was headed.

These attacks have had a prominent impact on the US collective memory in the years following the attacks. Stock markets took a hit, the safety of air travel was shaken and security was revamped, it was used as a pretext for an invasion of Afghanistan, Islamophobia rose, and memorials such as the one at Boston College sprang up nation-wide.

The Veteran’s Memorial was dedicated November 11, 2009, to the two hundred nine alumni killed in the line of duty in the First and Second World wars, Korea, Vietnam, Iraq and Afghanistan.3 6 The wall shows their class, rank and year of graduation. Like the 9/11 Memorial, there is a yearly mass on Veteran’s Day where the names on the wall are read off by Reserve Officer Training Corps members.

1. All photos taken by Author