This building was constructed in 1904 by the members of the Hartford Club, an organization that was established in 1873 and included influential members such as Samuel Clemons (Mark Twain). The building serves as an excellent example of Georgian Revival style of architecture. The club has hosted countless civic functions, political events, and charitable fundraisers. The club was only open to men for much of its first century. After the 1960s, the members agreed to accept women as full members and the organization more closely matches the diversity of the city. 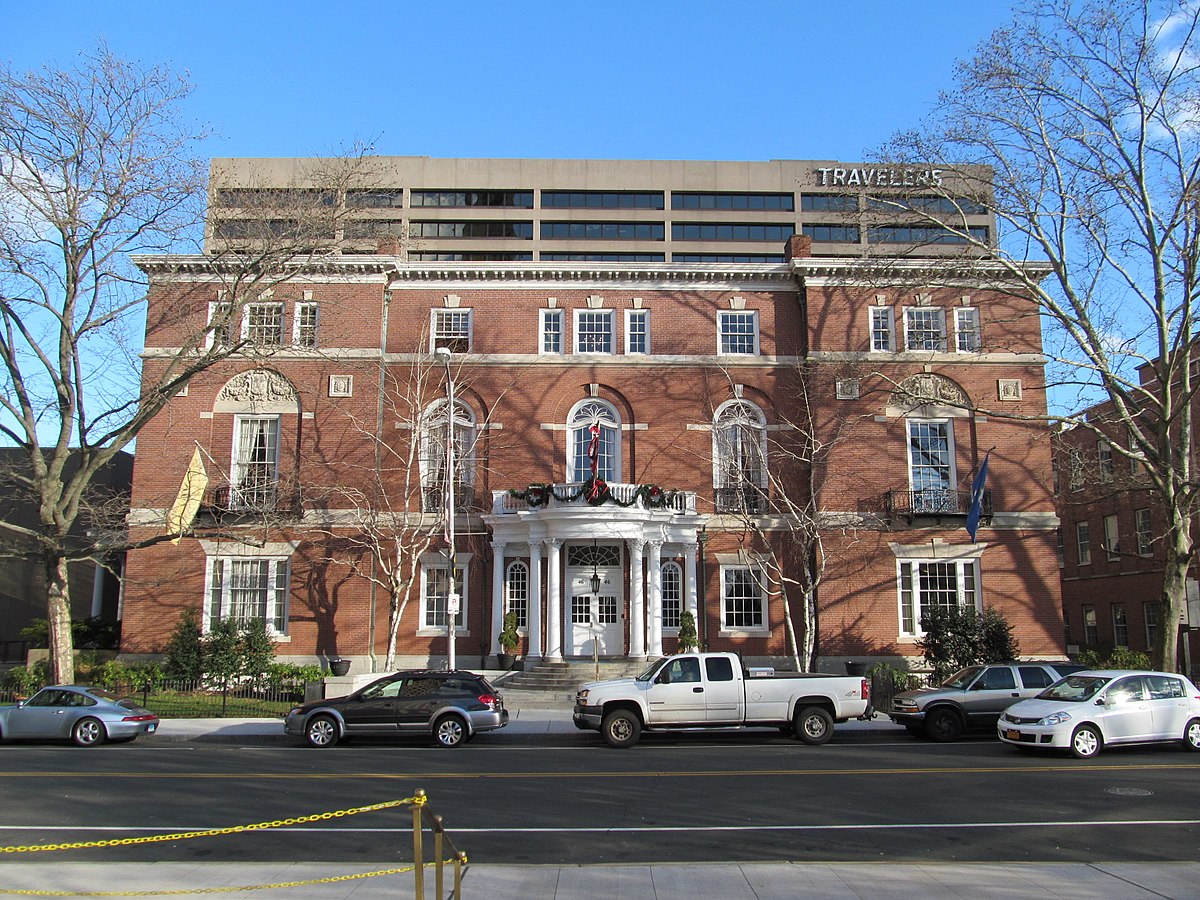 The building opened its doors in 1904, but the organization's history dates back to 1873 when several local clubs merged together to form the Hartford Club. The organization's membership was limited to men and quickly gained a reputation as a literary club, especially when Samuel Clemens joined in 1881. Besides literary figures, numerous influential and wealthy people of Hartford joined the club so that by the turn-of-the-century it served the city as a center of political and financial brokering. The club continually sought larger spaces for which to host its members, notably after merging with the Colonial Club in 1901. Hence, the 1904 building served as its grandest home and has remained its home through the twenty-first century.
The original club met for the first time in August 1873 after absorbing members of the Twilight Club and several organizations named for when they met -- Monday Evening Club, Saturday Club, and Thursday Club. Founding members included publishers, state attorneys, authors and numerous men of wealth -- a trend that continued for most of its history. After renting spaces for thirty years, the merging of its organization with the Colonial Club proved to be the catalyst for the funding a permanent space.
Designed by Robert D. Andrews of the architectural firm of Andrews, Jacques, and Rantoul, The Hartford Club serves as an exemplary model of the fully-developed Georgian Revival style made popular during the early twentieth century, primarily due to the influence of the World's Fair (Columbian Exposition) of 1893 in Chicago. The building opened to members on New Years Day, 1904. The members also raised funds to build a separate building in 1913 that included a bowling alley, squash courts, and a ballroom, but that structure was torn down in the late 1960s.
Throughout the twentieth century, prominent Hartford citizens joined the club, including every Governor. Indeed, Governor Wilbur Cross, a widower, chose to live at the club rather than at the Governor's Residence during his term. Given the wealth and influence of its members, it is not surprising that countless political campaigns included fundraising events held at the club.
As the nation changed culturally, so did the club -- minorities and women eventually made their way into the club. A woman first ate lunch in the main dining room in 1963, and then Laura Johnson became the first accepted member of the club in 1972, nearly 100 years after the club's inception. Eleven years later, in 1983, the membership elected Margaret Lawson as the club's first woman President.  In 1999, Richard Weaver-Bey became the club's first African American President.