Memorial Plaque of Sacco and Vanzetti

The trial and execution of Nicola Sacco and Bartolomeo Vanzetti on August 23rd, 1972, is commemorated by a historical plate at 256 Hanover Street in the North End of Boston. The Italian-born anarchists were convicted of murdering a guard during an armed robbery in 1920. The trial, which lasted only a few hours, is said to have been heavily influenced by anti-Italian and anti-immigrant prejudices which prevailed during the early 20th century in Boston. The building was once the home of the Sacco-Vanzetti Defense Committee, which gathered during the years after their conviction to try and prove the men’s innocence. During several failed attempts to appeal the conviction over seven years, the men’s supporters tried to bring forth previously unacknowledged ballistics reports, conflicting testimonies, and a confession from one of the men who participated in the robbery. As recent immigrants and members of an ethnic minority, the two men were emblematic of serious institutional prejudices within the American government. To this day, their guilt has not been proven by the state, and their trial and execution are seen as a failure of the Department of Justice to uphold liberty and fairness in the courts. According to a New York Times article written after the trial, the legal battle fought by those attempting to prove their innocence was “unprecedented in the history of American jurisprudence” (NYTimes).

The Plaque, located in the North End 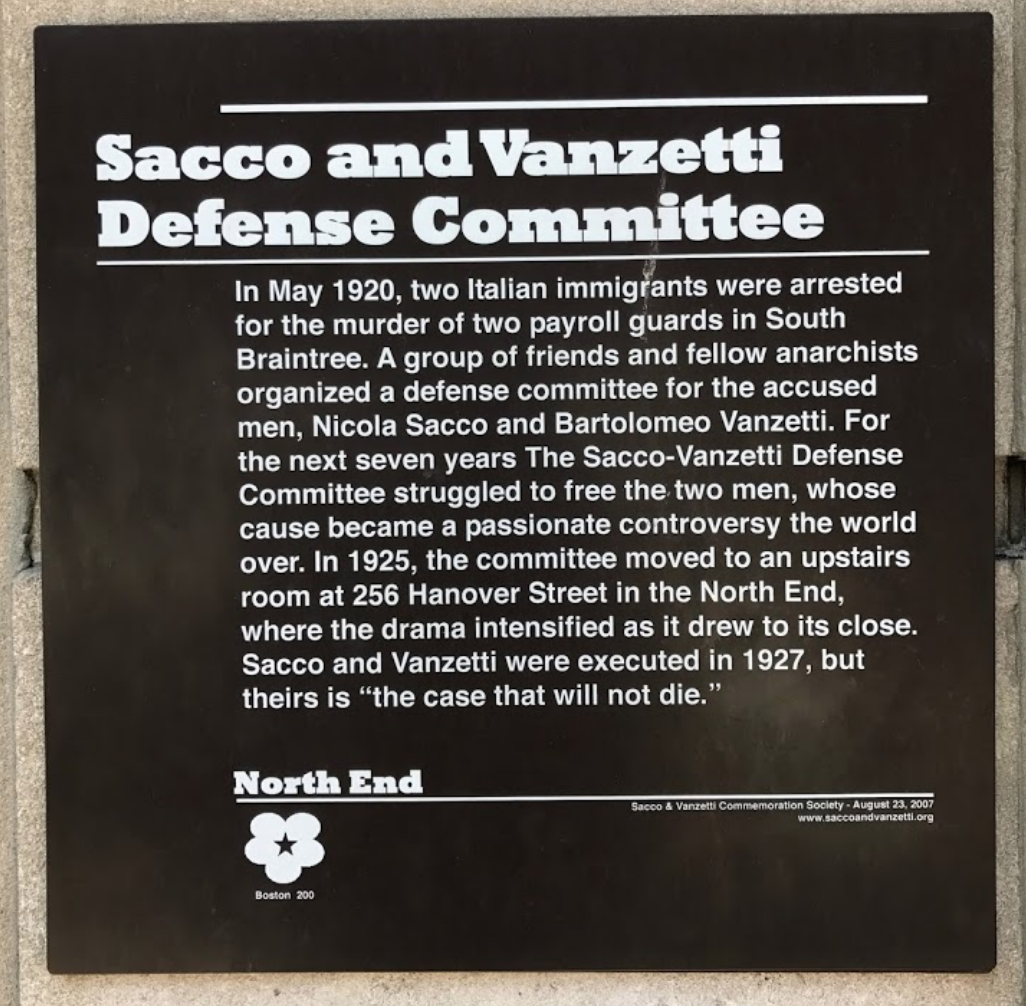 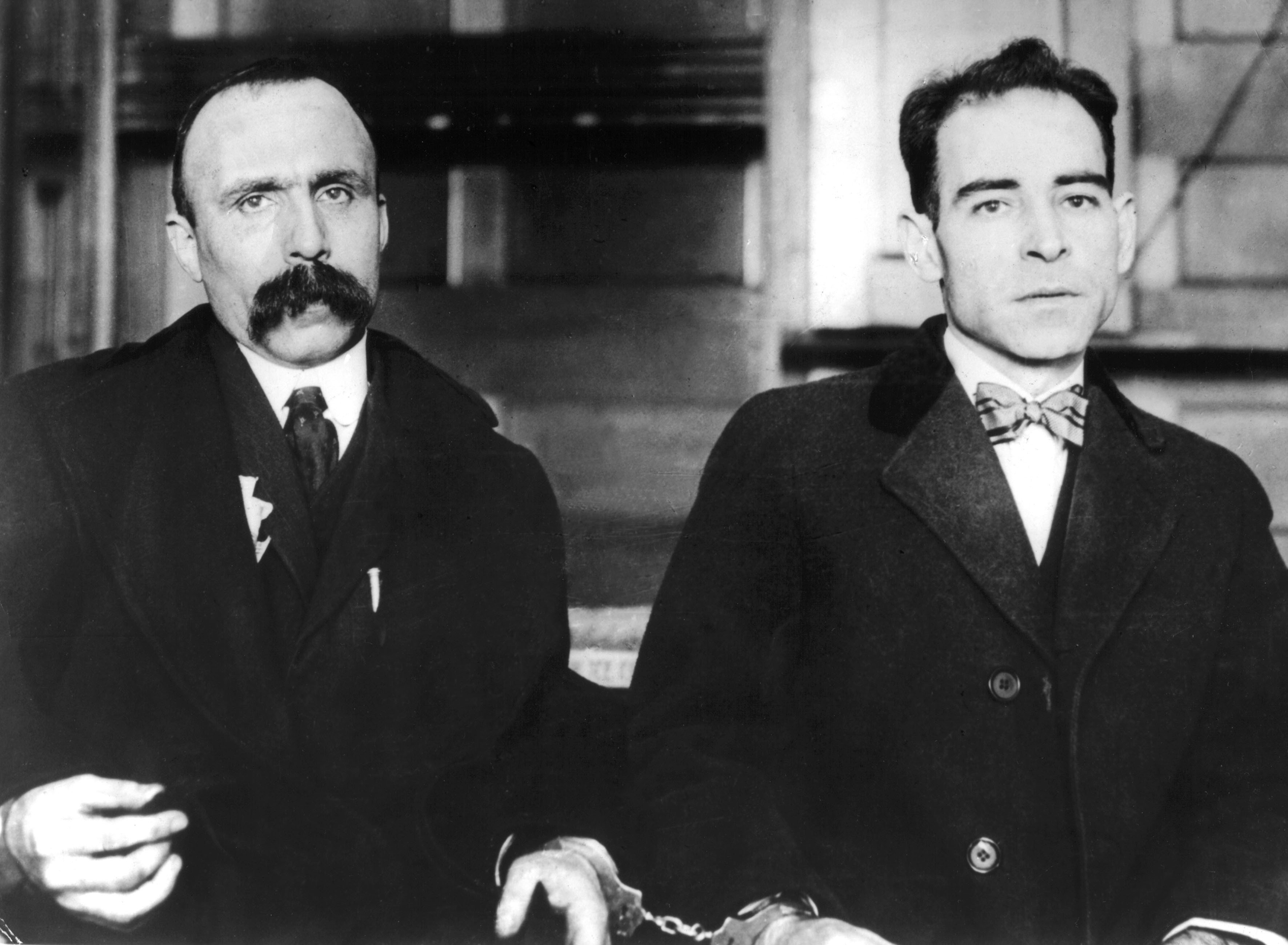 Sacco and Vanzetti were Italian anarchists who lived in Boston in the early 20th century. In April of 1920, the men were convicted of a robbery-murder in South Braintree at a shoe company, where two employees were murdered while carrying the company payroll. Sacco was a shoemaker and night watchman. He was born on April 22nd, 1891 in Torremaggiore, Italy and immigrated to the United States at age 17. Vanzetti, a fishmonger, was born on June 11, 1888, in Villafalletto, Italy. He immigrated to the United States at age 20. The two men were followers of Luigi Galleani, an Italian anarchist. In the early 20th century, Italian anarchists were regarded as dangerous by the American government due to multiple assassinations and poisoning attempts by Galleanists against American officials in Washington D.C., Chicago, New York, and San Francisco.

The trial of Sacco and Vanzetti received world-wide attention and to this day the state has not proven its case against the men. The jury was selected with great prejudice in order to produce a guilty verdict. The prosecutor, Frederick Katzmann, was highly nationalistic and xenophobic and employed fear-mongering tactics. Instead of offering objective evidence, Katzmann conducted an attack on the duo’s personal ideologies in order to prove their guilt. He questioned Sacco and Vanzetti’s loyalty to the American government and exploited post-World War fears and the duo’s political views to manipulate the jury in his favor. Retrospectively, Katzmann has been accused of misleading the jury through his deceptive wordplay and brutal cross-examination of the two men. Judge Thayer, who had presided over the case, often spoke of the two men with deep disdain. He allowed Katzmann’s persistent behavior throughout the trial, thus proving further bias. Moreover, the reliability of the Braintree witnesses has often been called into question, as several gave contradictory testimonies.

The defense committee, formed after the court ruling, was comprised of several of Sacco and Vanzetti’s close friends. For six years, the group met at 256 Hanover Street and worked tirelessly on behalf of the two men. The committee’s writing sought to expose the lack of evidence on behalf of the prosecution and the corrupt judicial system. They wrote and disseminated reports detailing evidence of bias and negligence by the Department of Justice. Their official report, titled Facing the Chair, dissected the legal case posed by the prosecution, highlighting its nativist attitudes and lack of proper evidence. The report also features a description of lives of Sacco and Vanzetti in prison in order to elicit sympathy from its readers, bringing to life the feeling of impending doom felt by the two men:

“day by day the props are dashed from under their feet and they feel themselves being inexorably pushed towards the Chair by the blind hatred of thousands of well-meaning citizens, by the superhuman, involved, stealthy, soulless mechanism of the law. . . ”3

Despite all of their hard work, the defense committee was denied all opportunities to save their dear friends in spite of hard evidence brought forth by the group that would surely prove their innocence.

According to a New York Times article published the morning after the execution, Sacco’s last words were “Long Live Anarchy,” spoken in Italian. In Vanzetti’s final moments, he said “I am an innocent man… I wish to forgive some people for what they are now doing to me.”4 A third man was hung alongside them, Celestino Madeiros, who had pleaded guilty for the crimes allegedly committed by Sacco and Vanzetti. He further confessed to the court that neither of the men were present during the robbery. The night of their execution, hundreds of Italian supporters gathered on the streets in the North End. Police were unable to control the furious crowds. The funerals, which took place on August 28th in the North End were attended by thousands of mourners. In 1977, the two men were exonerated by the Governor Dukakis of Massachusetts.

The history of the plaque is noteworthy, as it mysteriously disappeared from the building in the 1980s and was missing for over 20 years. The plaque was one of many historical markers in the City of Boston erected in the late 70s and was re-erected in 2007 through an effort initiated by the Sacco and Vanzetti Commemoration Society, whose mission is to preserve the memory of the two men, and to educate others on the history of Massachusetts radical groups.