The Sacred Cod is a five foot-long wooden effigy of an Atlantic cod that can be found hanging in the House of Representatives chamber in the Massachusetts State House. The image of a cod was chosen to symbolize the important role the fishing industry played within Massachusetts’ economy. Despite it always being present in the chamber, the cod has gone through (at least) two known incarnations, with a lifetime that can be traced out over the course of approximately three centuries.

The Sacred Cod hanging in its current day location in the Chamber of the House of Representatives in the Massachusetts State House. 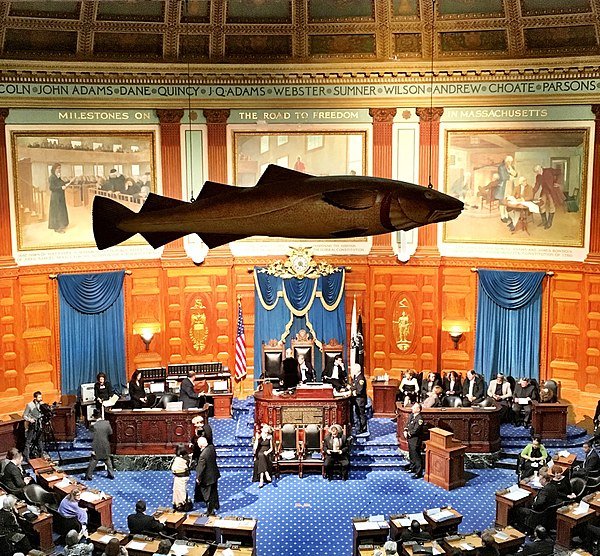 A rendering of the modern Massachusetts state house (c. 1862) 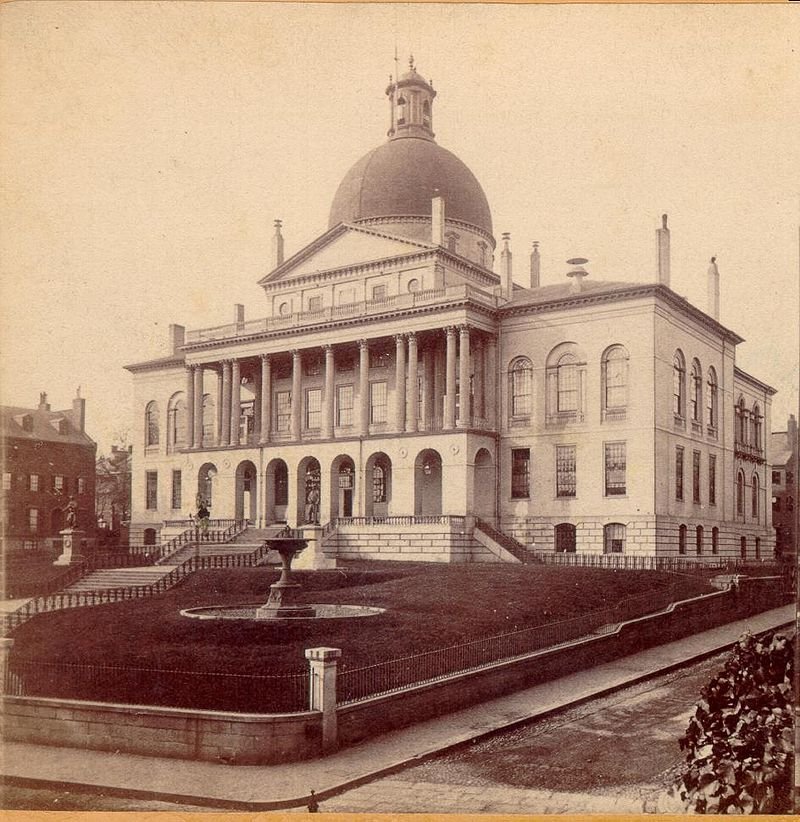 The image of an Atlantic cod was chosen due to the important role the fishing industry played within Massachusetts’ economy for over 400 years. Cod fisheries were set up along the coast in what today is referred to as New England, and cod-fishing became one of the first major industries to come into the "New World" from Europe. Important fishing ports include places like Gloucester, Boston, Provincetown, and New Bedford. Developments in fishing technology during the Industrial Revolution, while efficient, contributed to a longstanding battle in combating the decline of fish stocks which continues to this day. While the industry may be shrinking, it still holds a level of prominence in the eyes of many New Englanders as a cultural cornerstone. The cod itself memorializes the importance the fishing industry held in the lives of people who first settled in Massachusetts.

The first cod replica, which some speculate never actually existed, was destroyed in a fire that occurred in 1747. There are rumors that Judge Samuel Sewall, a judicial figure prominently involved in the Salem Witch trials, gave the first cod. However, no solid proof exists. The fact that the cod was subsequently lost to a fire leaves the story too open-ended to come to any conclusion regarding its existence. The second cod can be dated to sometime between 1748 and 1773. However, this one also mysteriously disappeared, perhaps sometime during the American Revolution. The Committee on History of the Emblem of the Codfish released a statement strongly suggesting that British soldiers removed and destroyed the effigy, likely during the Siege of Boston, to dishearten the rebellious colonials. The third cod was installed in 1784 in the Old State House at the urging of Representative John Rowe who believed it served as a “… memorial of the importance of the Cod-Fishery to the welfare of this Commonwealth…” (1) Later in 1798, it was transported to the Representatives chamber in the new State House, where it resides to this day.

The Sacred Cod is not the official title of the sculpture, but rather a nickname that emerged during the early 20th century. The Committee would refer to the cod in reports as “the sacred emblem”. Eventually, newspapers and journals began referring to the carving colloquially as “the Sacred Cod.” This name transcended just the effigy and was eventually applied to the actual live species itself. The Sacred Cod garnered enough respect that it was at one time described as, “… riding serenely the sound waves of debate… for this sedate and solitary fish is instinct with memories and prophecy…” (4) by a Committee of the House in 1895. Deference for this fish existed in both political and public realms.

Also important to note is the infamous cod-napping that occurred in 1933. A small group of Harvard students, members of a humor magazine the Harvard Lampoon, broke into the House chamber and cut down the cod. A panic swept across the city as state detectives, Boston police, and State House guards scoured the greater-Boston area for the wooden fish. Some legislators were so shocked that they claimed it would be sacrilegious to conduct business without the presence of the Sacred Cod to guide them. Chief of Harvard Yard police Charles Apted eventually tracked down and returned the cod 50 hours after the theft, although it is unclear exactly how the events actually transpired. The sacred cod was reinstalled in its rightful place, with the only difference being that it was positioned six inches higher so as to prevent future thefts.