Installed in old Boston cobblestones on October 4, 1987, this bronze statue represents Mrs. Mallard and her eight ducklings from Robert McCloskey’s book, “Make Way for Ducklings.” In addition to being the official Massachusetts state children’s book, Mrs. Mallard and her ducklings have been highly influential in Boston’s culture. While this statue serves as a tourist attraction for young children, it has also played a role in such historical events as easing US-Soviet nuclear tensions as well as many feminist movements. This statue has been affecting the culture of Boston and its people for over 30 years.

The Make Way for Ducklings Statue found in Moscow, which helped the US ease nuclear tensions with the USSR through being a symbol of peace and diplomacy. 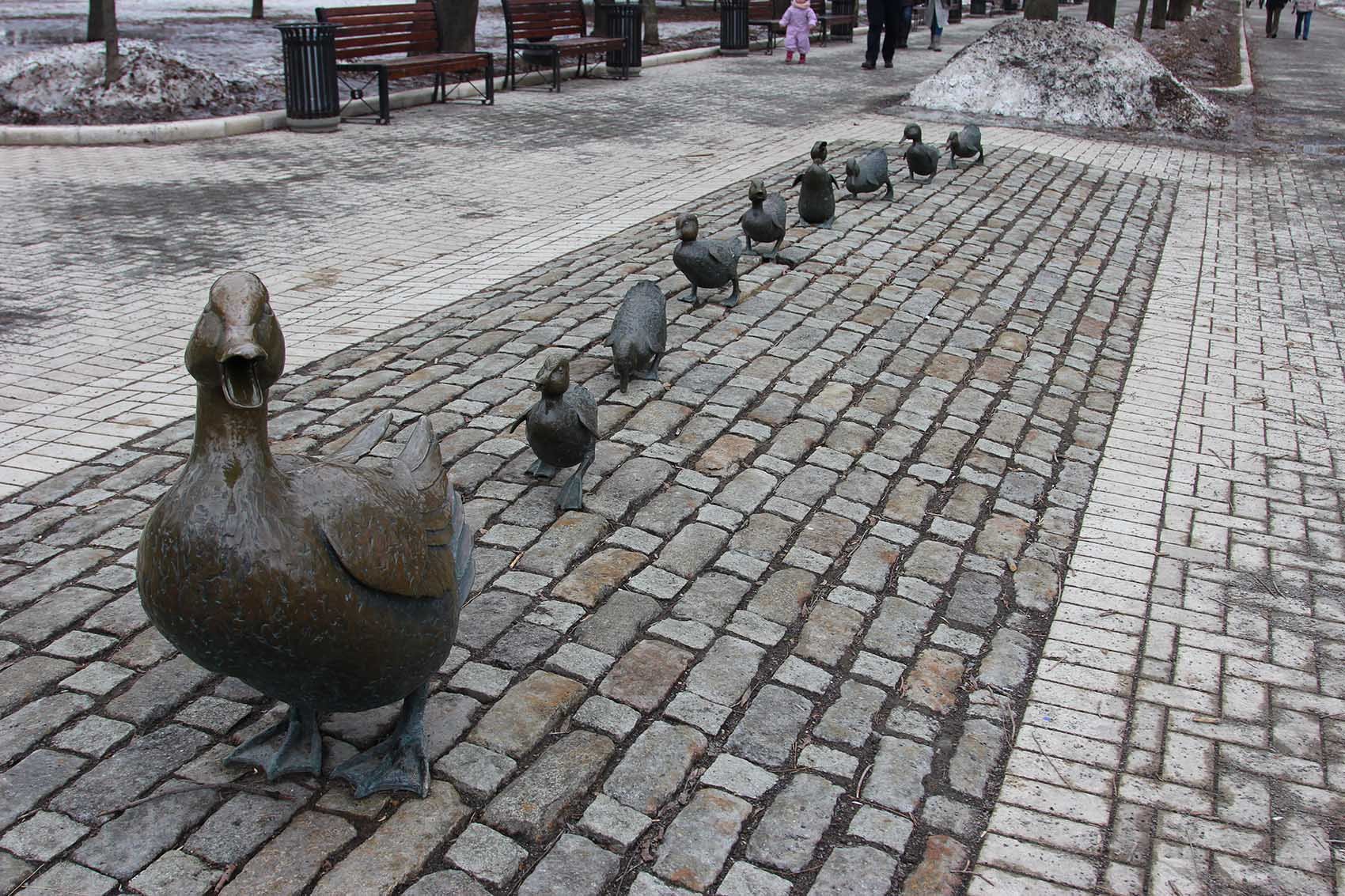 The Make Way for Ducklings Statue in Boston dressed with pink yarn hats, symbolic of the feminist movement. 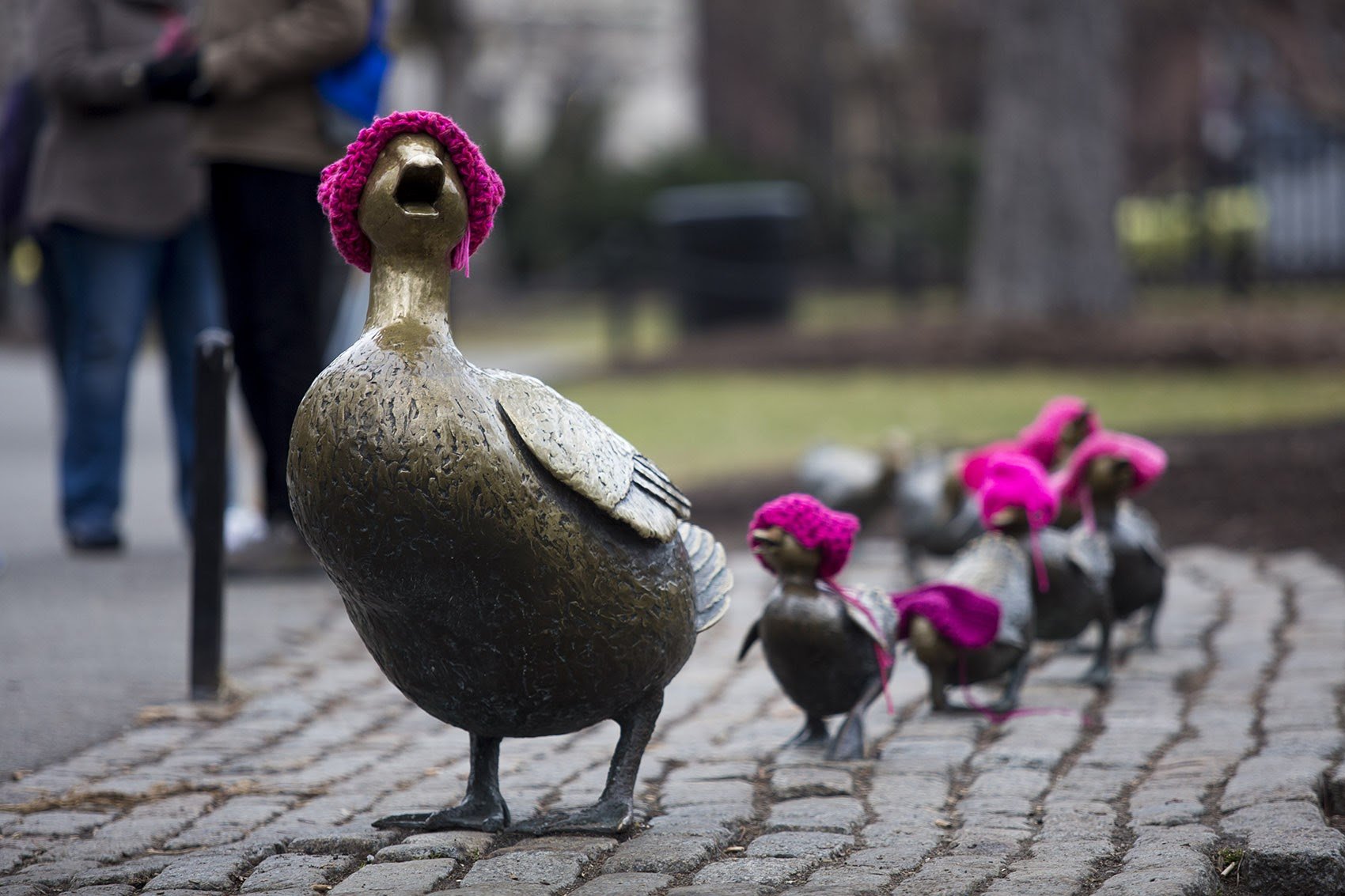 It can be hard to imagine that a simple children’s book has the potential not only to influence Boston’s culture but also to serve as a symbol of improvements in the US-USSR relationship. That’s exactly what Robert McCloskey’s 1941 book, Make Way for Ducklings did. The book was inspired by McCloskey’s observations of ducks in the Boston Public Garden as he commuted every day to the Vesper George School of Art. His Caldecott Medal winning book tells the story of a family of ducklings, Jack, Kack, Lack, Mack, Nack, Ouack, Pack, and Quack, who follow their mother into a permanent home in the Boston Public Garden after a lot of wandering around. The book's main message of respectful co-existence between humans and ducks captures McCloskey’s observation that the increasing amount of traffic in Boston caused many problems in the interactions of the two groups.

The public reacted very well to McCloskey’s book.  It was the winner of the prestigious Caldecott Medal, which awards the most distinguished American children’s book each year. It won this award despite critics such as Alice Fannin, who commented on the book’s "loose plotting" and the absence of an explanation for Mrs. Mallard's leaving of the Lagoon Island.8  These critical commentaries didn’t affect the public's overwhelmingly positive response to the book and in 1987, a statue was erected in the Boston Public Garden’s cobblestones. In 2000, it became the official children’s book of Massachusetts.

The book also has a broader public influence. Boston Magazine's Madeline Bilis suggests that the independent and non-submisive Mrs. Mallard has been viewed as

"one of the first feminist children’s book characters. Why? Mrs. Mallard is a capable female who completes the single-parented act of transporting her children safely across a busy road."7

It also played a role in the January 2016 Boston Women's March, when the ducks were decorated with pink yarn hats to represent gender equality. The story and statue have become a part of Boston’s culture and the book has been continuously in print since its publication in 1941.

The book appeared shortly before the attack on Pearl Harbor and the official declaration of war on Japan. The wartime public cheered the book for its surprising merriness, beautiful, well-detailed illustrations, optimism and comedic value. In the years following the book’s publication, the US and allied forces defeated the opposition, ending with the atomic bombings of Hiroshima and Nagasaki. This catastrophic and tragic time of war, where families were split apart through the draft and many soldiers ended up lost or dead, required a cheery balance for the children living through this. The feminism and independent mother empowerment inherent in the book captured this as many fathers were missing during the time of its publication. However, the need for the ducklings didn’t end with World War II. The ending of this hot war inspired the start of the Cold War, lasting from 1947 to 1991.

As Boston radio commentator, Bob Shaffer noted, the Cold War is where the significance of the ducklings shines through. The biggest issue during this time was the nuclear tensions between the United States and the Soviet Union. These ducklings represented a resolution of the issue, being a gift to the Soviet Union and a symbol of peace. In 1991, the Cold War ended through the signing of the START Treaty and a replica of the Make Way for Ducklings statue was built in Moscow. The treaty itself limits how many nuclear and intercontinental missiles the two countries could have and shows that they were committed to peace. Furthermore, the signing of the treaty symbolized diplomacy on a personal level. The ducklings captured these symbols as they were being installed in Moscow, and represented how far the US and USSR had gone in terms of international relationships. The gifting of it stemmed from the interactions between the First Lady of the time, Barbara Bush, and Raisa Gorbachev, Mikhail Gorbachev’s wife.

"The public art offering came as the two countries signed a major nuclear arms treaty — the Strategic Arms Reduction Treaty. The START I treaty limited how many warheads and intercontinental ballistic missiles the U.S. and the USSR could have."6

The gift represented the improving relationship between the two nations through friendship, love, and diplomacy. Because of the innocence of the Make Way for Ducklings statue, especially the replica enjoyed by the children of Moscow, it was able to ease tensions between two nations engaged in war.

The Make Way for Ducklings statue, inspired by McCloskey’s book, evolved from being just about ducks and humans to being a symbol of Massachussetts and world peace. McCloskey never had the intention of writing to symbolize the easing of nuclear tensions, but it became such a big part in Boston’s culture and female empowerment that it eventually seeped over into international politics. Overall, this statue, located in the Boston Public Garden’s Cobblestones is still enjoyed by many children but has a history of influence along with numerous symbolic meanings.