Chicano Park is a park located in the Barrio Logan neighborhood of San Diego, California. Created on April 22nd, 1970, the park is 7.9 acres or 32,000 square feet and features the largest outdoor mural collection in the US. The park celebrates the Chicano, Mexican-American, and Mexican immigrant population and history of San Diego. Chicano Park is on the US National Register of Historic Places, and is also a US National Historic Landmark and a San Diego Historic Landmark. The park was formed after public backlash against the building of a parking lot for a California Highway Patrol station in the early 1970s, culminating in a takeover of the land and evicting the construction workers. In the aftermath, the city conceded and allowed for a community park to be built instead, thus giving birth to Chicano Park. Representing the idea culture of the immigrants who came into the U.S. and started new life, creating new generation of LatinX and never forgetting their roots and traditions and famous people like Cesar Chavez who the Hispanic culture admire. 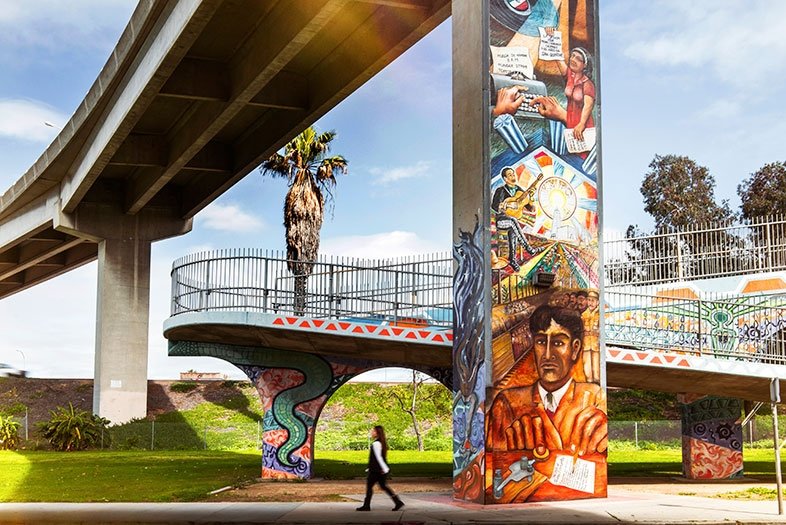 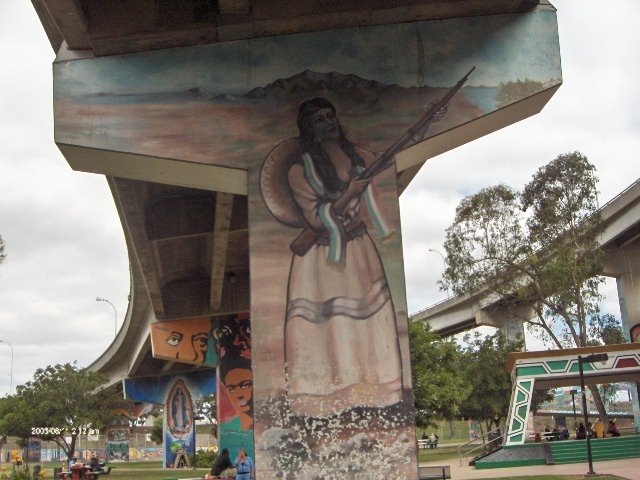 All the way to bay 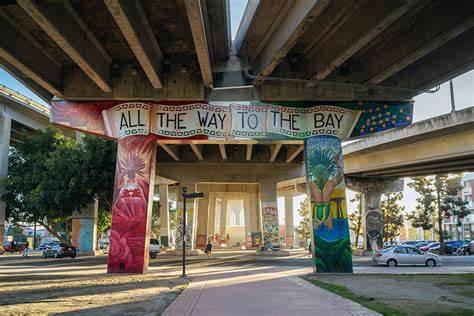 In the early 1960s the 5 freeway was constructed right through the heart of the San Diego Latinx community, latinx reguarding of both sex's in the hispanic language to identify both male and female instead of Latino/a, essentially separating Barrio Logan from the rest of the much larger community of Logan Heights. Later that century the construction of the Coronado Bridge freeway, which lasted 2 years from 1967’- 69’, would further box the community of Barrio Logan in by creating a sort of Southern Boundary. With back-to-back disregard for the Latinx community, the state government would attempt another land grab of the Barrio Logan community. With intentions of building a new California Highway Patrol (CHP) headquarters in the vacant plot that was promised as a park. On the morning of April 22, 1970 Mario Solis, a brown beret and student at San Diego City college, on his way to class stumbled upon bulldozers excavating 3 acres of land on the vacant plot. He then proceeded to question the construction workers of their intentions and once the motives became clear as to what was to be built. He scurried off to raise awareness amongst the community, gathering as many of his friends and family that he could and rushed back to the site forming human chains and blocking off the bulldozers, not allowing them to do their intended jobs. For the next 12 days, “an unprecedented number of students, community activists and raza’s from Barrios throughout San Diego and other parts of Aztlan unite.” After such persistent and fiery dedication to protect the land, even after multiple standoffs with the police, city officials were finally ready to negotiate. Upon the conclusion of these negotiations, the people of Barrio Logan would finally get the go ahead to extend the now historically famous park, that is Chicano Park.

Since the creation of Chicano Park, the community has used the space for a variety of organized events. Given the historical challenge that ultimately led to the inception of the park, community members celebrate a colorful array of cultural traditions up until present day. Annually since 1971, Barrio Logan celebrates the momentous anniversary of the Chicano Park Takeover that occurred on April 22, 1970 (Santos). Throughout the years Chicano Park has also been a location for civil and immigrant rights protests. A fairly recent political demonstration, The Solidarity Gathering at Chicano Park, took place in September 2017 to show community support for opposing activists looking to remove the iconic murals (Winkley). A more calm and camaraderie filled tradition that manifested from Chicano Park Day celebrations is La Vuelta Cultural Summer Festival. Every August, for the last few years, this festival has brought together the vivid and colorful Latino hobby of lowrider vehicles. The festival not only boasts a variety of artistic automobiles, but also celebrates the ChicanX heritage and culture that inspires it. Events such as those mentioned have helped preserve the ChicanX culture by further immersing the local and surrounding neighborhoods in cultural celebrations, organized political events, and diverse extracurricular traditions.

In recent years the CPSC has spearheaded the community's campaign to prevent the damage and/or destruction of the murals during the ongoing seismic retrofit project to reinforce the bridge supports in the event of an earthquake. The CPSC is currently involved in mitigation negotiations with CalTrans relative to how the park will be put back together at the conclusion of the retrofit project and what improvements will be made (CPSC). In other words, in the previous years, the city has been wanting to paint over the murals since they aren't seen as much since under the bridge of going on the Coronado bay or surpassing over the 5 free-way. Protest and festivals and sadly a tragic death had occured in the previous years when a drunk driver had fallen over the bridge and had fallen on top of a family, killing at least 2 and injuring others around the area during a concert.

Chicano Park also hosts a prominent display of painted murals that illustrate the predominantly Hispanic, Mexican-American, and Chicano culture of the surrounding neighborhood, Barrio Logan. Chicano Park features the largest collection of outdoor murals in the United States. The “Voz Libre” mural, painted in 1984, was dedicated to a Don Pedro Gonzalez, the owner of the first Spanish radio station in California. In 1977, the “Varrio Si, Yonkes No” mural was painted, based on a flier distributed at a community meeting warning of the dangers of automotive junkyards, which incited protests in Barrio Logan at the time. One mural even depicts the founding of Mexico City.