Completed in 1983, the Thomas and Mack Center is home to the University of Nevada at Las Vegas basketball team. The arena has hosted several sporting events such as basketball, football, rodeo, hockey, volleyball, mixed martial arts, and boxing. The facility is named in honor of Nevada bankers E. Parry Thomas and Jerome D. Mack in recognition of their donations to the university to support the arena's construction.

The arena has hosted various sporting events and other entertainment since opening in 1983. 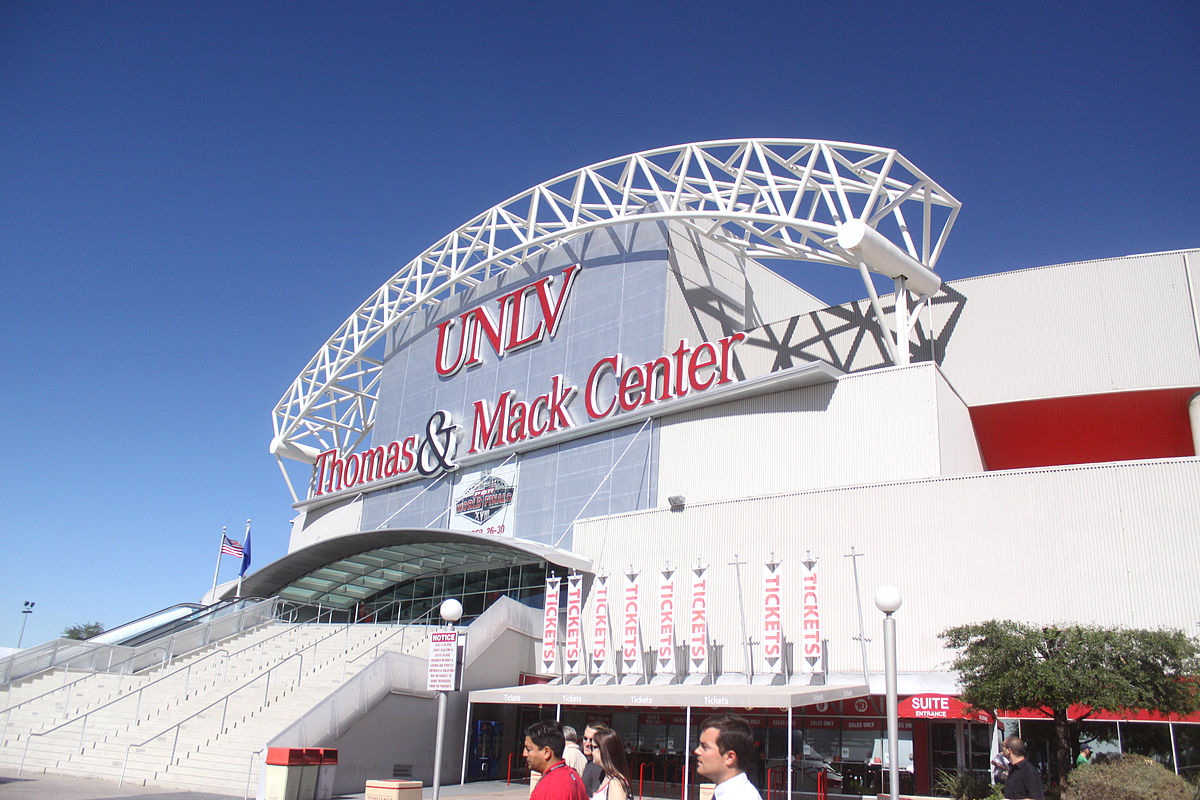 Panoramic view of the inside of the arena during a basketball event. 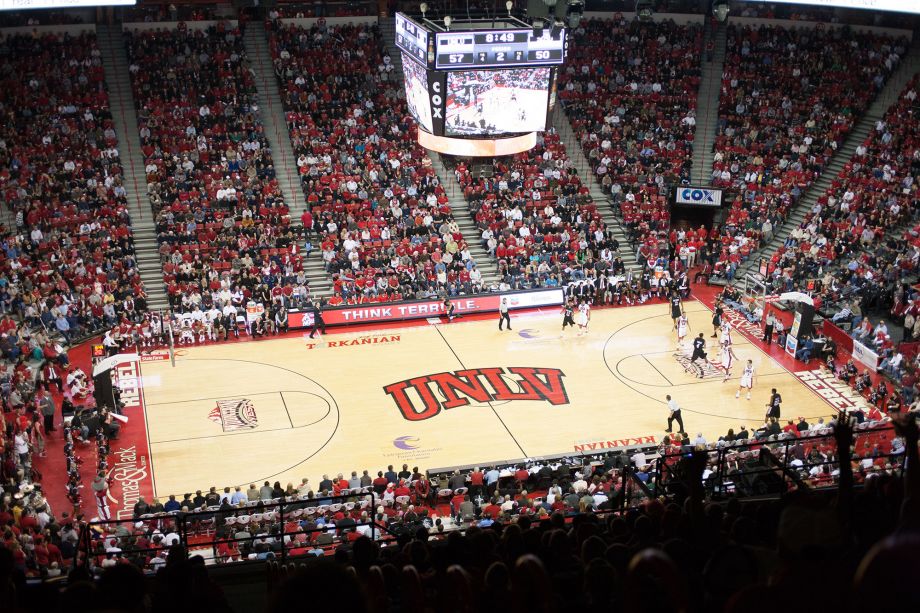 Aerial view of the outside of the entire building, including views of the Cox Pavilion. 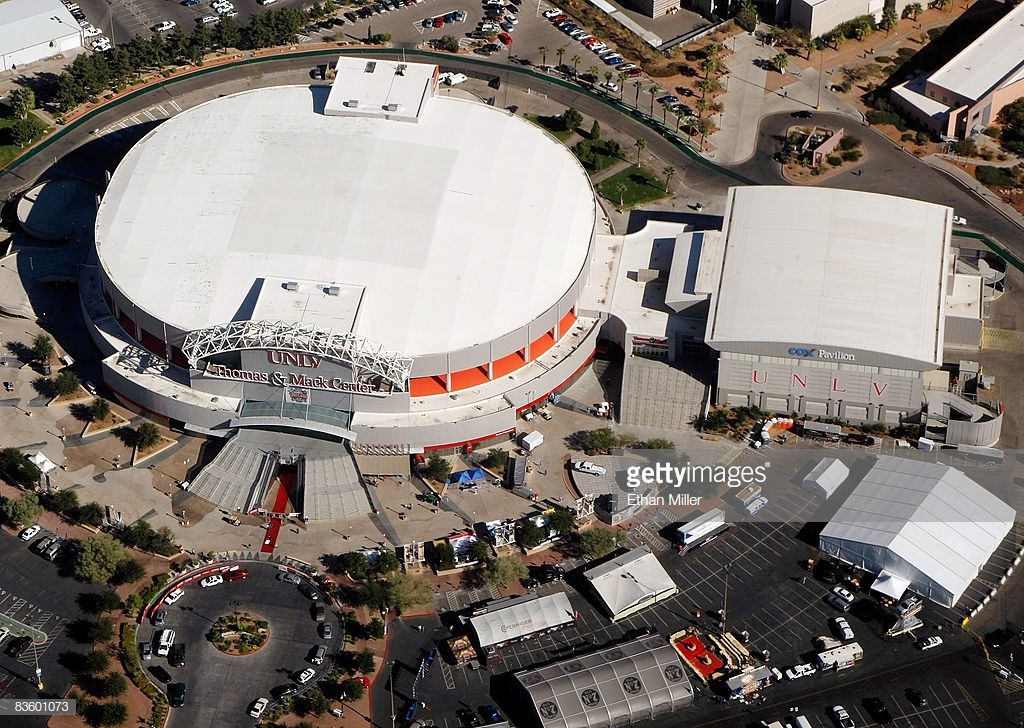 In December of 1983, the Thomas and Mack Center opened its doors to the public for a concert with legendary entertainiers Frank Sinatra, Dean Martin, and Diana Ross. Today, the arena hosts various events from concerts to sporting events. The Thomas and Mack Center is best known as the home to the UNLV Rebels basketball team, but it has hosted numerous events including the final Presidential debate of 2016.

In 1999, the arena received funds to complete a major interior and exterior renovation. By 2008, new visual equipment was installed including a 4-sided LED scoreboard, a new shot clock system for the backboards, six wall-mounted locker room game clocks, two custom scoreboards which include player stats, and an outdoor marquee LED billboard. These upgrades made the arena more advanced and allowed for other opportunities. In 2001, the Cox Pavilion, a smaller arena, was added to the facility for smaller events such as women’s basketball and volleyball.

The arena was previously nicknamed “The Shark Tank” after coach Jerry Tarkanian, the head coach during the arena’s opening, won a national championship and led the team to three Final Fours in 1990. Other events held at the stadium include the 1994-1995 Big West Conference, 1997-1999 Western Athletic Conference, and the 2000-2003 Mountain West Conference. The Mountain West Conference stayed at the arena from 2007 to 2013. In 2007, for the first time in NBA history, an on-campus college sports arena held an NBA All-Star Game. Previously to this, the arena also hosted two other NBA games for the Los Angeles Lakers and Utah Jazz. The Utah Jazz used the center during the 1980s. In 1984, Kareem-Abdul-Jabbar broke Wilt Chamberlain’s record for points in a career. In 1992, the Lakers used the arena for Game 4 of their playoff series. The center hosted the Los Angeles Lakers pre-season games annually until 2014.

Other sporting events hosted at the Thomas and Mack Center have brought various people together for sports. The center hosts the National Finals Rodeo each December. In 1984, the USA Olympic volleyball team held their competition here. In September of 1992, boxing legend, Julio Chavez fought Hector “Macho” Camacho. From 1999 to 2015, the arena held the PBR World Finals. UFC 43 and other mixed martial arts championships have been held at the arena. Concerts, music festivals, and conventions are regularly hosted by the center. Several famous bands such as Motley Crue, AC/DC, Van Halen, Metallica, Pearl Jam, Kiss, Guns N’ Roses, and Aerosmith have performed at the arena. Lectures have been given by famous names such as Bill Clinton and Mikhail Gorbachev. On October 19, 2016, the final Presidential debate was hosted here.