This historical marker is located at a place where thousands of Native Americans camped during the long exodus from the Smoky Mountain region to reservations in what is not the state of Oklahoma The park is documented as being of a scarce few camps and trail sites. This park contains Cherokee memorial with a circle of flags among other markers and is the final resting place of many Native peoples, including Cherokee leaders Fly Smith and Whitepath. Visitors to the historical park can also see a historic log cabin that includes exhibits related to the Trail of Tears. Evey year the first weekend after Labor day the commission sponsors a Pow Wow. This promotes Native Americans celebrating their heritage.

The "Trail of Tears" marker is part of the trail's marker series. The marker is located on 200 Trail of Tears Drive in Hopkinsville Kentucky. The sign commemorates Southeastern Native Americans march through Kentucky on the way to Oklahoma. 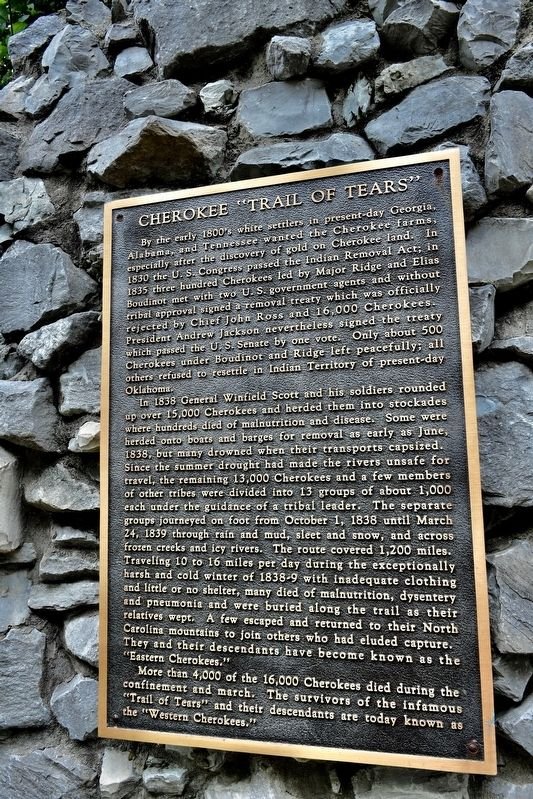 Andrew Jackson signed the Indian Removal Act in 1930. The act allowed the U.S. Army to capture over 100,000 Cherokee, Creek, Seminole, Choctaw, and Chickasaw tribes.The Natives land was sold in a lottery to white settlers. 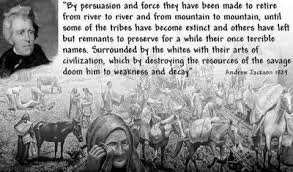 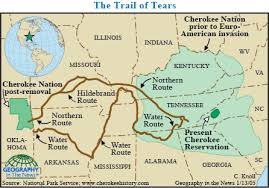 During the march over 4,000 Native Americans died from malnutrition, starvation, disease and exposure to the elements due to lack of proper dress. the Cherokees called their forced move “Nunahi-Duna-Dlo-Hilu-I” or “Trail Where They Cried." 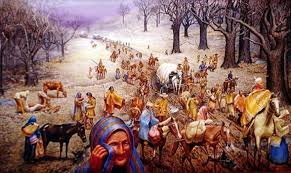 General Winfield Scott led the expedition on the trail. He requested that Cherokee Chiefs lead the march instead of The U.S. Army, but his request fell on deaf ears. 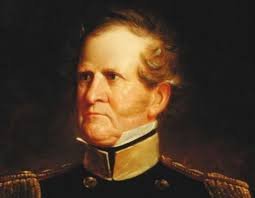 Following the discovery of gold on Cherokee lands in Georgia, white settlers violated treaties that recognized Native sovereignty leading to conflicts related to lands from Georgia to Tennessee and North Carolina. State governments took action to seize control of the Cherokee lands and the federal government responded by passing the Indian Removal Act in 1830.

The act enabled the U.S. Army to erect prison yards to hold the Native Americans in preparation for a forced march from Georgia to lands in the future state of Oklahoma. In 1835 Elias Boudinot and Major Ridge met with U.S. officials and signed the treaty contrary to the disapproval of the Cherokee Nation. The Native American land was sold in a lottery to white settlers for a total of $5.6 million. The government captured fifteen thousand Cherokees also Seminole, Choctaw, Chickasaw and Creek tribes.

The Native Indians were held in camps during the summer of 1838 they were forced to Relocate to modern-day Oklahoma acceded one-hundred thousand. On June 1938 when boats carrying the Native Americans overturned numerous Cherokees were killed. This led to the creation of thirteen groups who were forced to march 1,200 miles. The march was organized by the US Army and referred to by the Cherokees speakers who worked with the army as “Nunahi-Duna-Dlo-Hilu-I” or “Trail Where They Cried.” Native Americans were not afforded the luxury of taking extra blankets, food or clothing. They were permitted to have only five-thousand horses, 100 oxen, and six-hundred wagons. The estimation is four-thousand of the fifteen-thousand Cherokee died on the “Trail of Tears.”  Many of the deaths were attributed to starvation, disease, exposure to the elements from lack of suitable clothing.

The relocation of the Native Americans created them to adapt to unfamiliar territory. The Great Plains were new to the Southeast Native Americans. The terrain where they once lived and hunted were completely opposite of the flat land they were forced to move to. The West coast Native Americans of Apaches, Comanches, Wichitas, and Kiowas were a threat now that their land had been compromised by the relocated of the Southeastern tribes. The outcome of the “Trail of Tears” is the complete removal of Native Americans from the Southeast United States, and the government profited five-million from selling the land to white settlers.