Wilberforce University is the oldest private historically Black university in the United States. It is located just outside of Xenia in Greene County, Ohio. The school is named after William Wilberforce, a 19th Century English politician who wrote and spoke against slavery. William Wilberforce was instrumental in passing through Parliament the Slave Trade Act of 1807, which abolished that practice in the British Colonies. In 1856, the University was planned as a major weapon in the war against slavery, arming the former slave with the power of education. 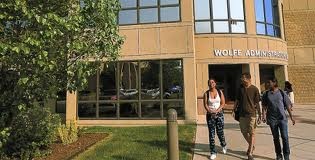 During the time of the Underground Railroad, many of the towns in southern Ohio were home to Blacks who had come north to escape slavery. Cincinnati served as a major stop along the route to freedom. Some former slaves continued north to Michigan and Canada, but many settled in the rich farmland surrounding the towns of Zanesville, Chillicothe, Dayton, and Xenia. This area was also home to a significant number of abolitionist Whites who helped the former slaves by providing work and housing.

With the support of then Governor Salmon Chase, members of the Cincinnati Council of the African Methodist Episcopal Church purchased land and buildings at Tanawa Springs, a health resort just outside of Xenia. Among the founding members were Bishop Daniel Payne, Reverend Lewis Woodson, Ishmael Keith, and Alfred Anderson. They envisioned creating a haven where Black intellectualism could thrive and worked to ensure its future by providing a solid education to those who would seek it.

A large percentage of the early students were the mixed-race children of white planters and their Black female partners. At the time, education would be denied to the offspring of such unions in the South, but in the Free State of Ohio, this opportunity could be provided. During the period of the Civil War, many of these southern students were pulled out of school. This led to financial difficulties for the college, which was forced to close its doors temporarily. When Bishop Payne was able to gather the capital, he purchased the school himself and was able to reopen. At the end of the war, some of the campus fell victim to arson upon the assassination of President Lincoln in April, 1865. Those responsible remain unknown. The college began receiving state funding in 1887. Since then, Wilberforce has been able to create two additional institutions: Central State University and the Payne Theological Seminary.

The existence of the University led directly to the development of a prominent Black professional community in Xenia and has produced a large number of graduates who have gone on to successful careers in diverse fields. The University has become a major point of interest on the landscape of Black culture and played a role in the 20th Century’s Civil Rights Movement. W. E. B. Du Bois was among the faculty for a time. The 1960s saw expansion and construction. During the Super Outbreak in the spring of 1974, however, much of the original campus was destroyed by the powerful tornado that also wiped out half of Xenia.

While Wilberforce University remains a relatively small school with an enrollment of less than 1000 students, the institution holds tightly to the vision of the founders and is committed to developing the students’ academic needs, social responsibility, and Christian principles and values. Although traditionally designed for the Black student, Wilberforce University welcomes people of all racial and ethnic backgrounds who wish to learn and grow.