Wayne County was established from the western portions of Cabell County in 1842, following previous attempts in the early 1830s and 1840s. The county is named in honor of Revolutionary War General "Mad" Anthony Wayne. Wayne County Courthouse is located on the highest point in the entire county. It was the site of a three day skirmish between Union troops and Confederate sympathizers during the Civil War in August 1861. From the 1890s to 1920s, citizens of Wayne, Ceredo, and Kenova debated the location of the county seat and numerous elections were held to try and move it. Five different courthouse buildings have existed during the county's existence, with the most recent structure built around 1923.

The fifth and current Wayne County Courthouse was built in 1923; newer additions were added in later years. 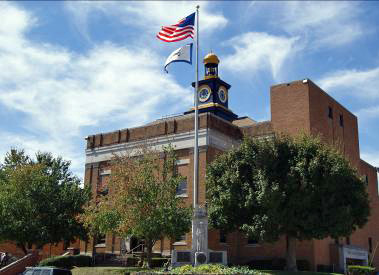 The 1897 courthouse was destroyed in a fire in 1921, with some speculating arson to be the cause. Image obtained from waynecountywv.org. 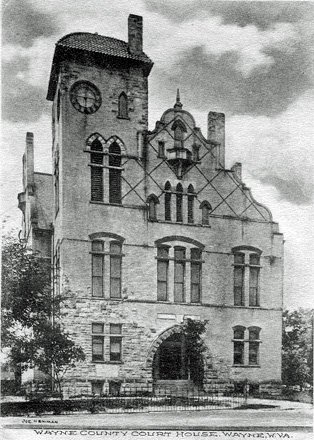 When Wayne County was established in 1842 the property of Abraham Trout, nestled in a central location, was designated as the county seat. The first county court meeting was held on April 11, 1842 in Trout’s home. Soon afterwards a two-story log cabin was built to serve as the courthouse and jail. The building of the courthouse contributed directly to the creation of the Town of Wayne. As the courthouse and other county government buildings were constructed residents flocked to the area, and businesses were opened; soon the Trout farm had evolved into a small community.

In the mid-1850s a permanent brick building was constructed to serve as the courthouse. It would soon become a focal point of local conflict in the Civil War. Much of the Town of Wayne supported the Confederacy and Virginia’s secession; on April 24, 1861, a secessionist flag was raised in the courthouse square. In late May or early June Union supporters from the northern part of the county forced the residents to remove the flag; reportedly the Unionists threatened to burn the town to the ground if they did not comply. In August the 5th (West) Virginia Volunteer Infantry, a Union regiment from Ceredo, marched into Wayne and occupied the town for several days. Confederate sympathizers from the surrounding area confronted the soldiers and gun battles erupted, with much of the fighting taking place in and around the courthouse. After receiving reinforcements the Union force left with the county records in their possession. They were stored in Ceredo, which served as the Union’s de facto Wayne County seat for the rest of the war. For years afterwards bullets from the engagement could be found in the courthouse’s wooden pillars.

In 1892 a new larger courthouse building was constructed at the cost of around $27,000. Supposedly the reasoning for building a new one was to accommodate an increase in business spurred by the Norfolk & Western Railway extending its line through the town. It was at this same time that a great debate arose over whether or not to move the county seat from Wayne to either Ceredo or Kenova. Both towns were much larger than Wayne, with bigger populations and economies. One major concern however was that both were at the northern end of the county; moving the seat there would make it more difficult for residents in the central and southern portions to travel to the courthouse for business. The struggle over the county seat would continue on and off again for the next three decades.

In 1896 the recently-build courthouse was destroyed in a fire, adding pressure to the movement to switch the county seat. The Ceredo Advance newspaper in particular was a strong advocate for moving the seat to Kenova. Nonetheless a new structure was built in Wayne the following year. Modeled off the McDowell County courthouse in Welch, it cost $18,000. On February 6, 1906, an election was held and voters chose to keep the courthouse in Wayne with a tally of 2,563 to 1,150. In 1921 residents of Kenova petitioned to have the courthouse moved, arguing that the town contributed more in taxes to the county. A new election was held on September 15, 1921 and while a slim majority of voters approved of the switch, it did not reach a required two-thirds approval to be enacted. Two weeks later, on October 2, the courthouse in Wayne was once again destroyed by fire. Rumors circulated that the fire was an act of arson in retaliation for the failed vote. Another petition was submitted and another election held to move the county seat on April 26, 1922; again Kenova did not receive the necessary amount of votes to win. A final vote was held in November 1924 and failed, putting an end to the debate.

The fifth and final courthouse in Wayne was constructed by 1924 and remains to this day. On May 30, 1923 a World War I Memorial was unveiled in front of the building honoring forty-two residents of Wayne County who died in the war. On April 25, 1960 future President John F. Kennedy gave a campaign speech at the courthouse square. Reportedly around 250 people were in attendance, and Kennedy spoke of his support for the coal industry.