Mather Homestead features elements of the Greek Revival style of architecture and was built in the north end of Hartford between 1835 and 1843 by William Mather. Mather arrived in the region as the city was growing and became a prosperous farmer. After his death, his home continued to serve as a residence until the 1920s Over the years, the building served as both a synagogue and as an African American Masonic Temple. Today, the former homestead is listed on the National Register of Historic Places for its architecture and use by diverse Hartford organizations. 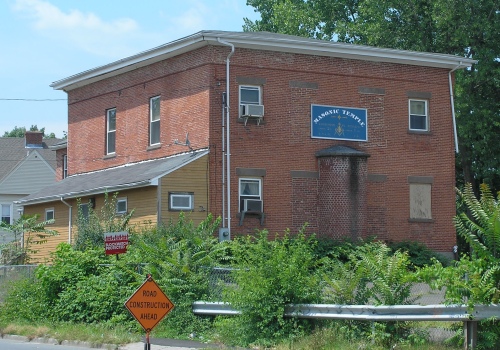 The Mather Homestead was built in the north end of Hartford between 1835 and 1843 by William Mather. Mather was a prosperous farmer and the home was built in the Greek Revival style. The home continued to serve as a residence until the 1920s.

In 1926, the property was converted into a Jewish synagogue by two congregations, Teferes Israel and Chevre Kadishe. The two congregations, which were founded by Russian Jews, merged the same year because neither was large enough to maintain a permanent rabbi. The property already belonged to a Jewish family, the Lutwacks, who bought it in 1916. The conversion of the home into a synagogue reflects the transformation of north Hartford into a more ethnically diverse neighborhood in the early twentieth century.

During the time that the Mather building was used as a synagogue, certain architectural changes were made to accommodate its new purpose. An ark for the Sacred Torah scrolls was built on the east wall and a central platform for the reading of the Torah was added. The platform was later removed. As was customary with Eastern European Jews, graven images were not included in the building, which was generally free of any sort of adornment.