Built in 1907, the Monroe County Courthouse serves as the seat of government for Monroe County and acts as the center of Bloomington, Indiana. The current building is the third courthouse erected in Monroe’s history and is considered the main attraction of the Courthouse Square Historic District, a designation given to the area of and around 1907 Courthouse Block by the National Register of Historic Places in 1990. The courthouse itself had already been listed individually in the register since 1976 as part of the town’s efforts to save the building from demolition. Also on the property are several memorials in dedication to the lives of soldiers of various wars.

The current Monroe County Courthouse building is its third incarnation and nearly face demolition in the mid-1970s to early 1980s. It is thanks to the determination of local citizens to keep their history alive that the building still stands. 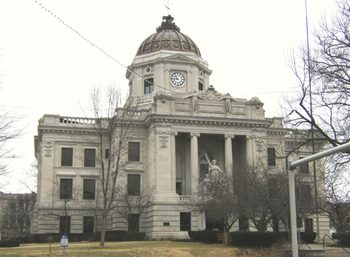 The second courthouse building was erected in 1821, costing roughly $7,965. It was first occupied in 1826, remaining in use until its demolition in 1906 when construction on the new and current building could begin. 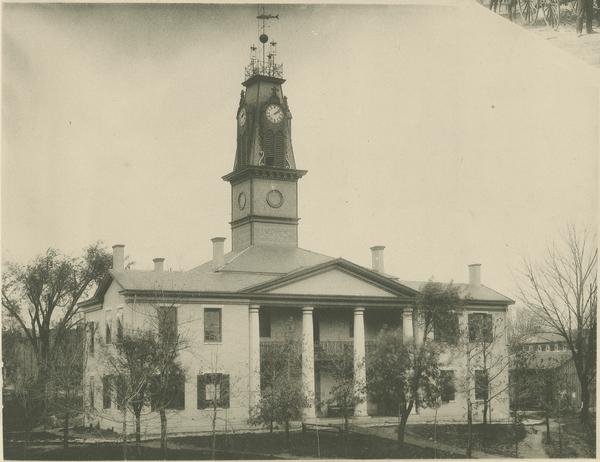 The new courthouse building was built with locally quarried limestone, a popular building material of the time. The need for this limestone for other architectural projects both local and elsewhere created a boom in Indiana's economy. 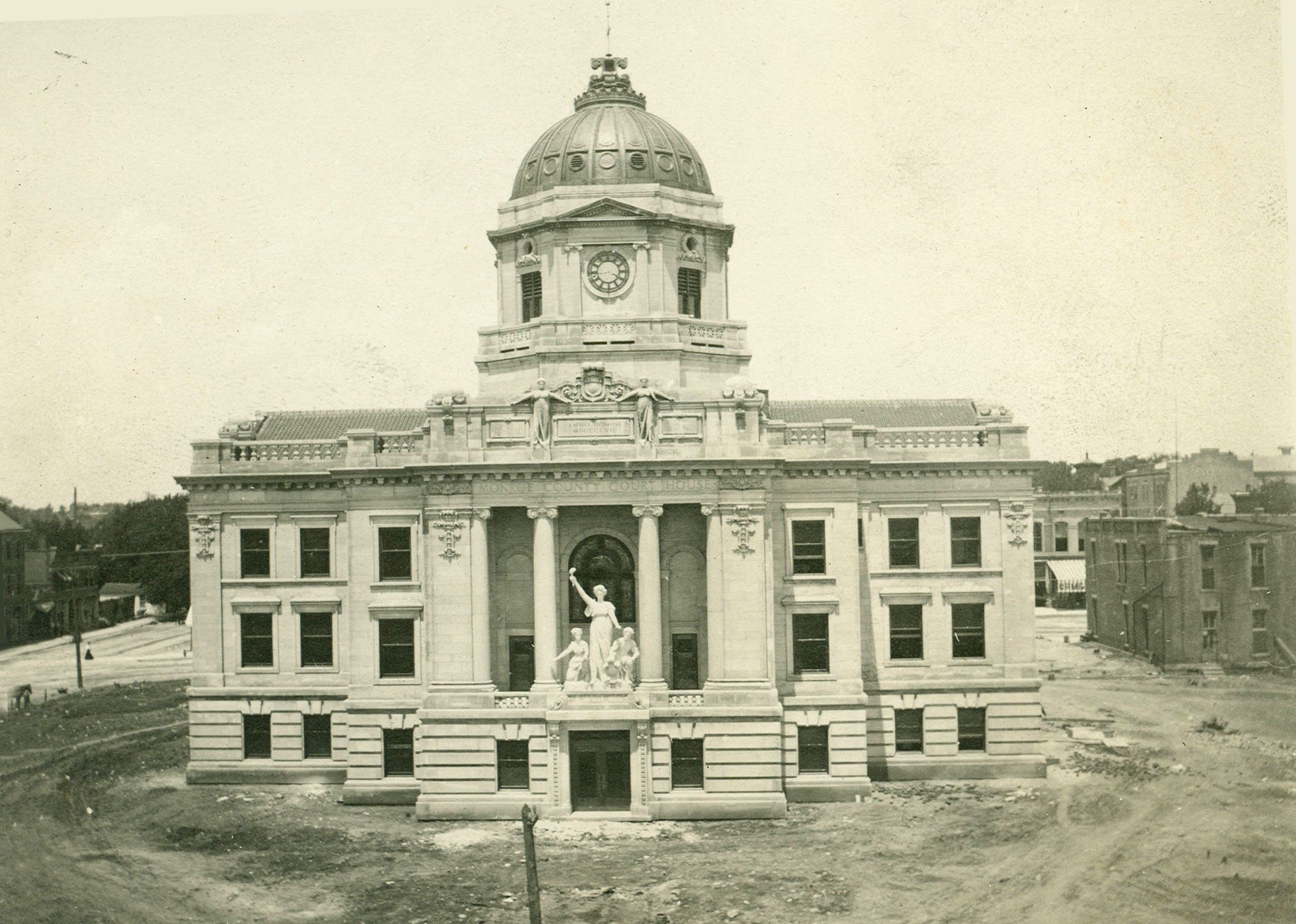 The fish weathervane has been an eccentric staple of both the second and third courthouses. Created out of copper by local Austin Seward in 1884, it stretches 3 feet and 9 inches in length. 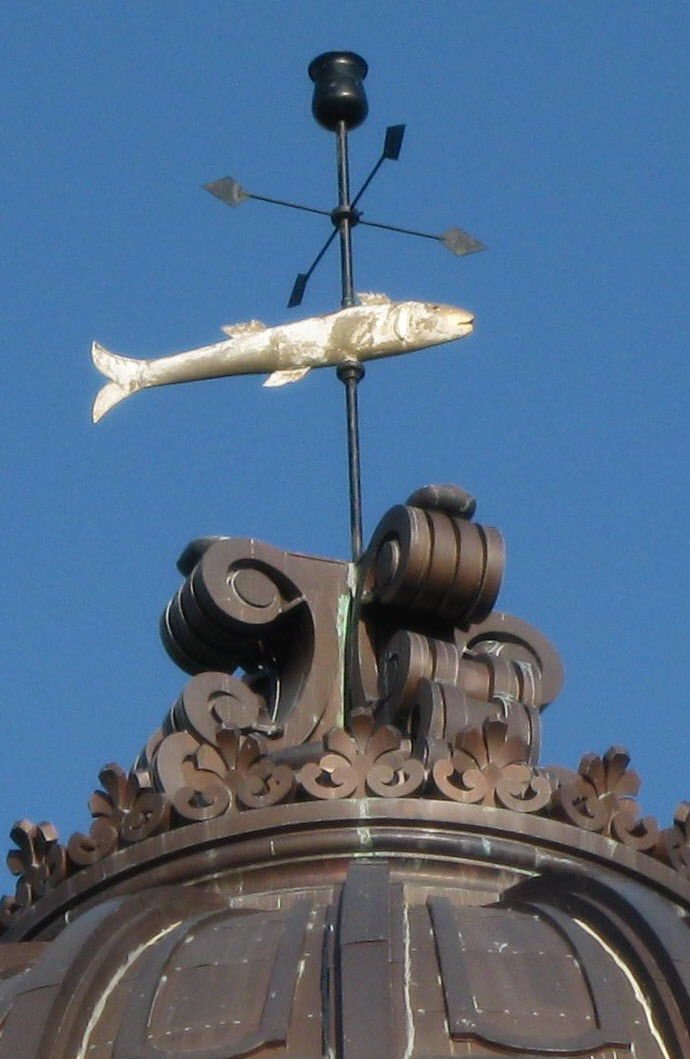 "The Light of the World" was carved by Hungarian native Albert Molnar, Sr. The central figure holds the torch of enlightenment and is framed by figures personifying the law and power. 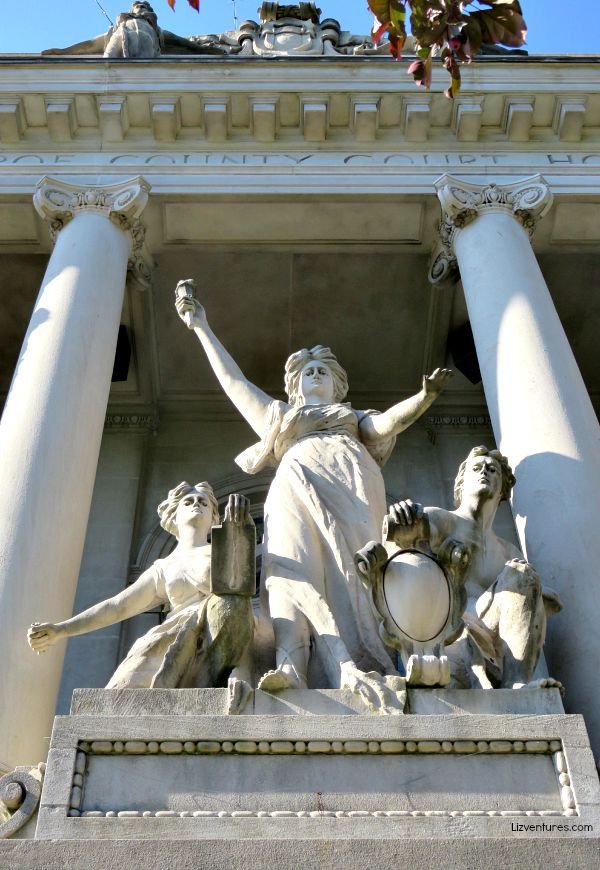 The G.A.R Soldiers of All Wars Memorial was erected in 1928 with panels specifically commemorating the Spanish-American War and World War I. A civil war stands watch on top of the memorial. 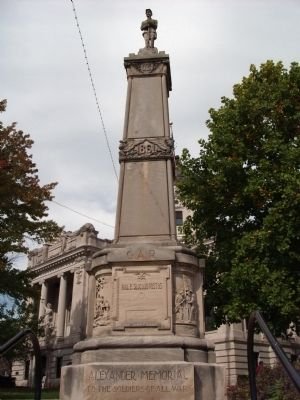 The Civil War Memorial was erected in 1909 to honor those who served in that war. Its centerpiece is an actual canon from 1864. 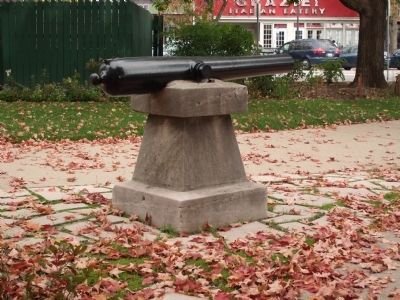 Standing directly next to the Civil War Memorial is "The Spirit of the Fighting Yank", a World War II memorial in honor of all the U.S. Armed Forces in that war. 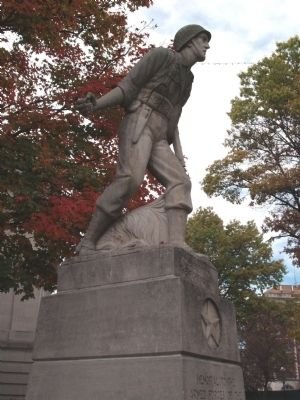 The Monroe County World War II Honor Roll is a plaque that reads the names of those who made the supreme sacrifice in that war. It was dedicated by the Bloomington and Friendship Garden Clubs. 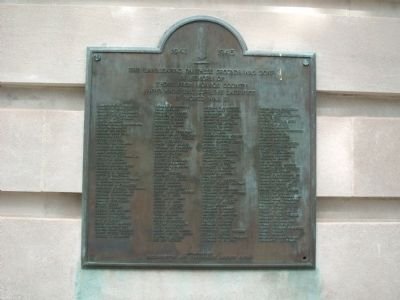 After the January 14, 1818, establishment of Monroe County and the later establishment of Bloomington Township on April 13, the First County Commissioners recognized the need for a courthouse. As part of the Shelbyville plan – meant to place the courthouse in a central open square with major street intersections at each of the four corners to allow the orientation of business buildings to face the governmental center of town – the first courthouse was built in August of that same year. The temporary log building was constructed on what would now be 106 S. Walnut Street and consisted of two rooms separated by an open passageway. By 1819 and contract had been signed with John Ketchum and construction had already begun on a more permanent residence for their local government needs.

This second incarnation of the Monroe County Courthouse was completed in 1826, a simple two-story square building topped with a tower that would see the later additions of two more wings and a four-columnned porch. In 1875, a clock tower was added while the building itself was remodeled in the French Second Empire or Mansard style, a contemporary “modern” style for government offices at the time. This would be the first courthouse to stand in the location of the current building, fulfilling the Shelbyville plan and acting as the center of town square. On March 5, 1827, the courthouse would be put to use when citizens voted 18 for to 3 against to incorporate Bloomington, their county seat, as a town.

By the early 1900s, the courthouse had begun to show its age and new renovations would no longer be enough. Thankfully, after the 1904 St. Louis World’s Fair a new style of architecture was sweeping the nation and Indiana was quick to catch on. By June 1906, the second courthouse building had been sold for $100 and was torn down by Contractor Pike. Hiring architectural firm Wang and Manhurin for their new courthouse and today’s current building, the ground was first broken in that same year. Also hired on as contractors were George W. Caldwell and Lester Drake of Columbus, Indiana, whose Palace of Agriculture had been part of the St. Louis World’s Fair. The completed Beaux-Arts Classical style building was dedicated on July 4, 1908.

In 1962 renovations were made to the building in an effort to provide more working space without being forced to add more exterior additions. Floors were added on the second and third levels beneath the dome of the courthouse to create a Superior Courtroom and expand office space. By the mid-1970s however, the need for modern updates and restorations to the aging building had arisen once more. There were talks of simply demolishing the building to make way for something new because the building was “not considered to be of any major historical significance.” Fearful of losing this piece of history, a small group of local citizens made it their mission to fight that opinion, starting with their appeal to have the courthouse listed on the National Register of Historic Places. Their goal was accomplished in 1976.

Even with this small victory and the approved emergency restoration of the dome, the courthouse would continue to face the threat of demolition until 1983 when the courthouse was finally approved for restoration. Currently, the building serves as the administrative offices for the county government. A new Justice Building was constructed in 1986 at 7th Street and College Avenue where court procedures are now held.

The lawn of the courthouse plays home to the many testaments to Monroe County’s pride in their military and the men and women that have served over the years. The largest monument among them is the Grand Army of the Republic (G.A.R) Soldiers of All Wars Memorial, or Alexander Memorial, erected in 1928 and designed by George W. Bunting. It was carved by Henry McIlveen and Josef Graf and is topped by the figure of a Civil War soldier. The memorial was named after native Civil War veteran Capt. William M. Alexander. He served for nearly five years during the Civil War with the 18th Indiana Volunteers. He also served as county sheriff and was a member of the Knights of Pythias.

Today the courthouse serves as a tribute to the history and heritage of Monroe County’s citizens past and present. Its art, architecture, and monuments demonstrate the pride Hoosiers have for their state. Its restoration exemplified that pride locally and was the beginning of a historic preservation ethic that began downtown and has now spread throughout the city and county. Welcome to the Monroe County Courthouse! 1