Leary’s Bookstore is one of the oldest known bookstores in America; it was in business from 1850 to 1969. It was known for housing a vast number of used books (more than 900,000) with 106 departments dividing them. The bookstore was established by William A. Leary and was located on 9 South 9th Street in downtown Philadelphia. Most interesting about this bookstore was the event that took place when the shop was torn down in 1969; an original copy of the Declaration of Independence was found, one that was older than even the copy that can be found in the National Archives in Washington D.C. Although the store no longer stands today, you can visit the site where it was located but it is merely just a parking lot in the heart of Philadelphia.

This is the outside of the infamous bookstore. It had three stories and a basement. https://www.saturdayeveningpost.com/2011/02/late-great-american-bookstores-learys-books/ 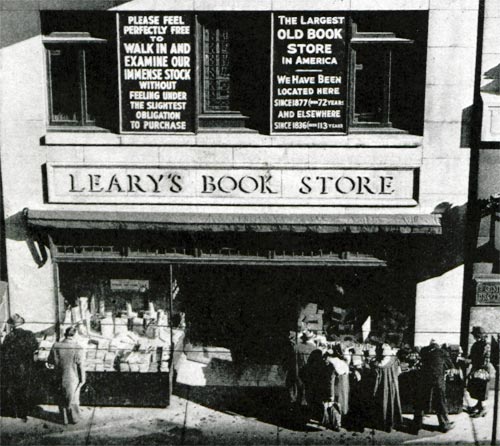 This is an advertisement for Leary's Bookstore. Consumers could find over 900,00 used books. https://blogs.princeton.edu/notabilia/2011/11/13/learys-bookstore-philadelphia-ca-1880/ 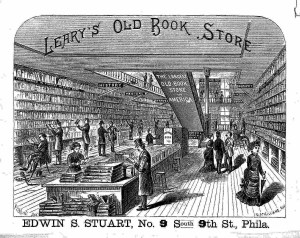 A crowd of consumers standing outside of Leary's Bookstore, probably taken during the Golden Age of Books. https://www.saturdayeveningpost.com/2011/02/late-great-american-bookstores-learys-books/ 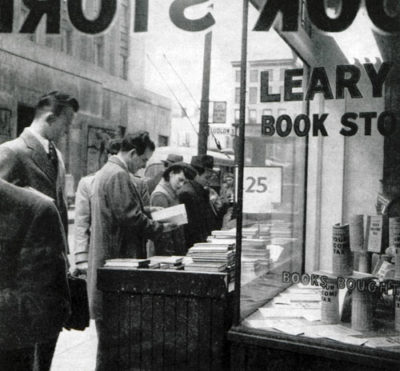 William A. Leary established a mere bookstall along a sidewalk in 1836 on North Second Street in Pennsylvania. He eventually went on to receive a location in close distance from the Old Market, and after he died, the business was acquired by Edwin S. Stuart and Charles Mann. The bookstore flourished greatly during the 19th century and first half of the twentieth century due to books being America’s favorite entertainment at the time. It was known for allowing customers to take as long as they wanted to shuffle through the books without interruption from any salesperson. After World War II, the majority of book consumers moved to suburban areas where they were distanced from Leary’s. This resulted in a decline for Leary’s used books and eventually led to the business being closed in November of 1968. When auctioning off the rest of the books after tearing the building down, many antiquated documents were found, including a John Dunlap copy of the Declaration of Independence.

This copy of the Declaration of Independence was distributed on July 5th of 1776 and is even older than the copy found in the National Archives of Washington D.C. The copy was purchased for $400,000 by two wealthy, Texas businessmen and is now on display in the Dallas Public Library. It is the only John Dunlap copy that can be viewed free of charge in America, all year-round.

Although the store has the historical significance of the presence of an original copy of the Declaration of Independence, this fact is not well known to many people. In contrast, it is remembered for its popularity and the huge selection of old books that could be found nowhere else. Many people would go to the bookstore in the search for unique and rare texts, and could even overhear interesting information spouted from the old bookmen.

Leary’s Bookstore is a great representation of the “Golden Age of Books,” where America was obsessed with reading as a form of entertainment. It is not only the oldest bookstore in America, but it is also one of the longest standings. Leary’s bookstore ran for 113 years and made history all the way through for its huge selection of used books. It did not go out without a bang, either. The event of finding one of the oldest copies of the Declaration of Independence in America shows how extensive and amazing this bookstore was. If not for the suburban movement that took place after World War II, Leary’s Bookstore may still be standing today.