Muskie Fans watching a sporting event at the stadium. Attending sporting events was a way for Muskies to bond as a community, as it still is today. 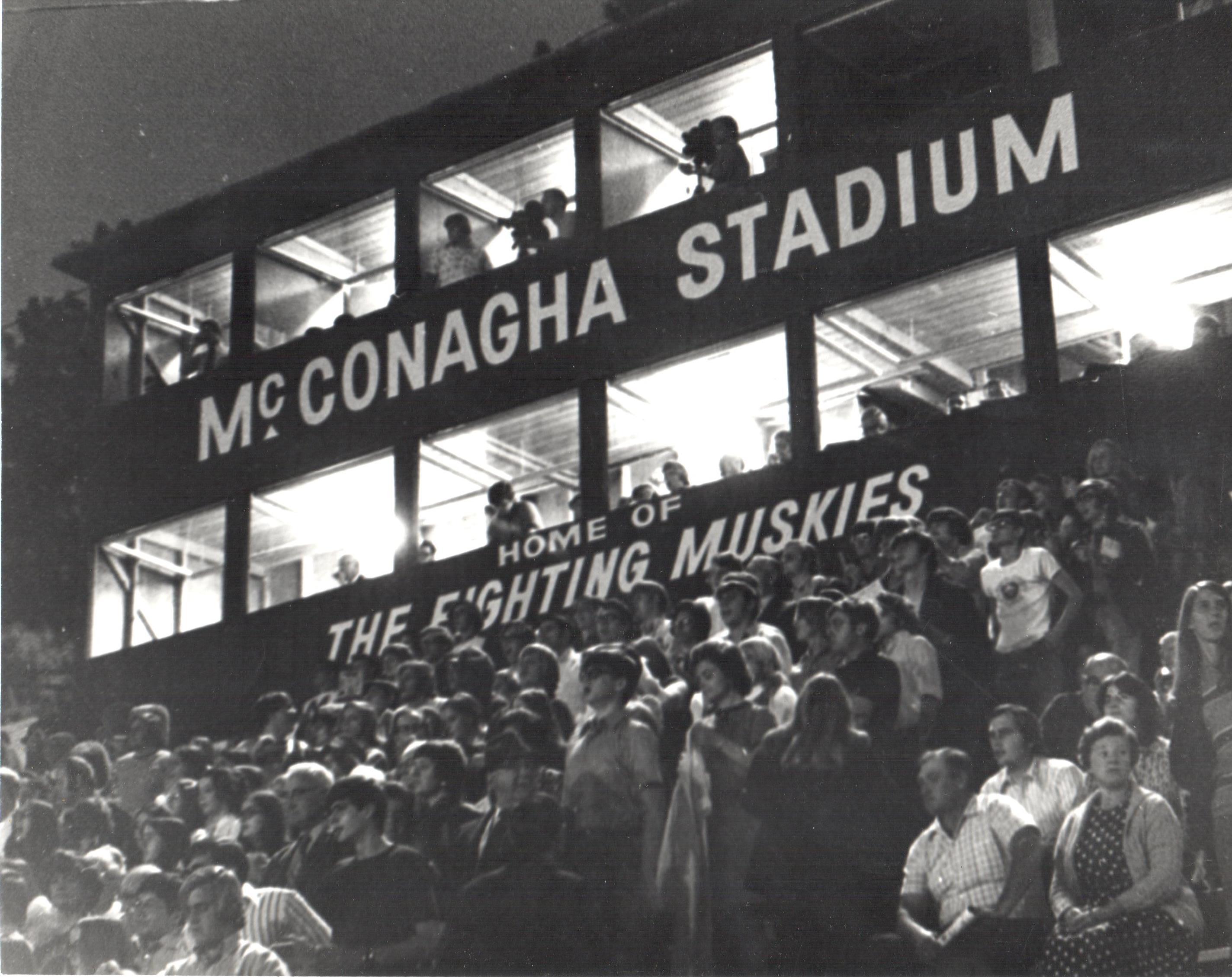 View of the stadium from across the College Lake 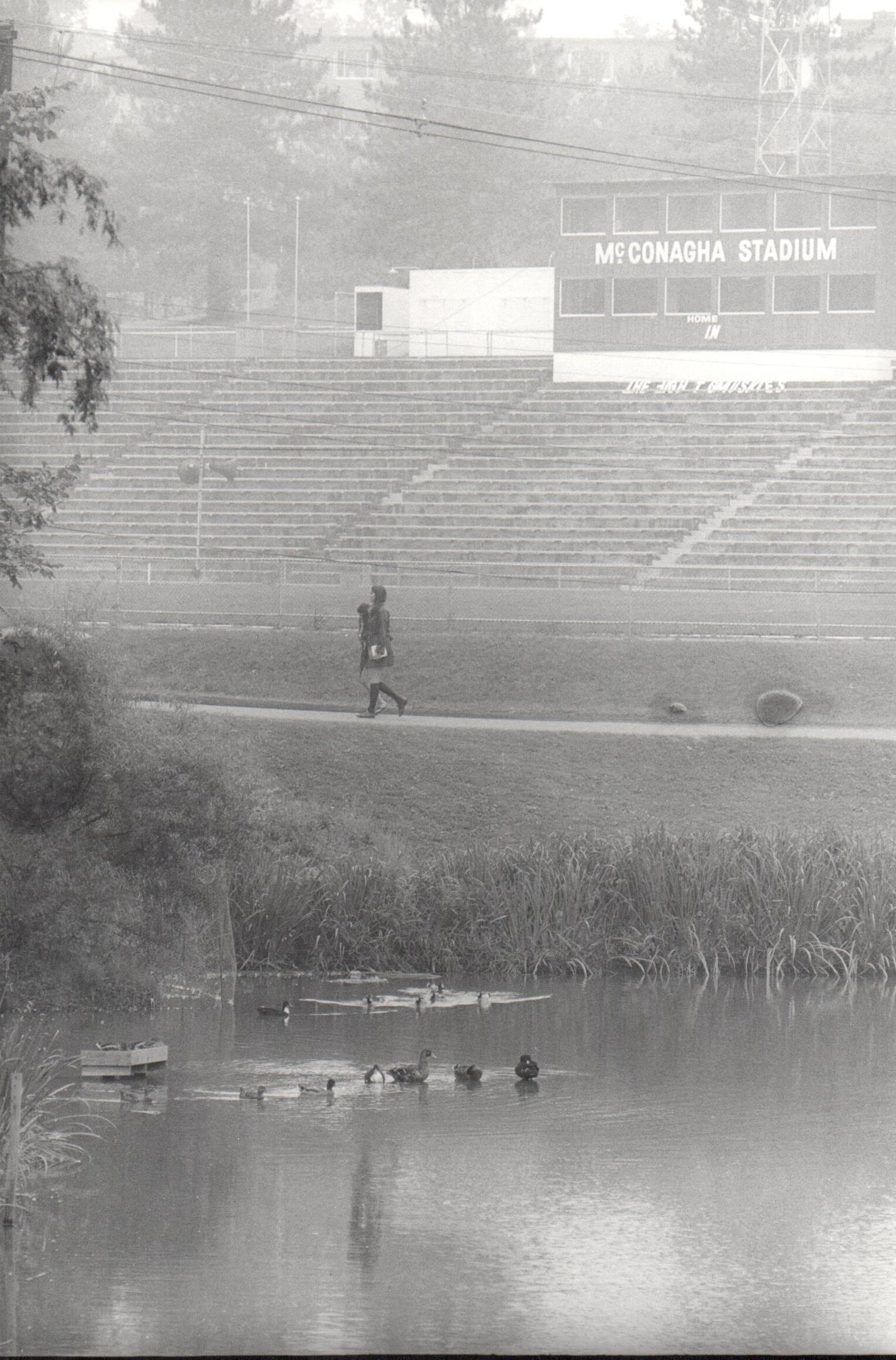 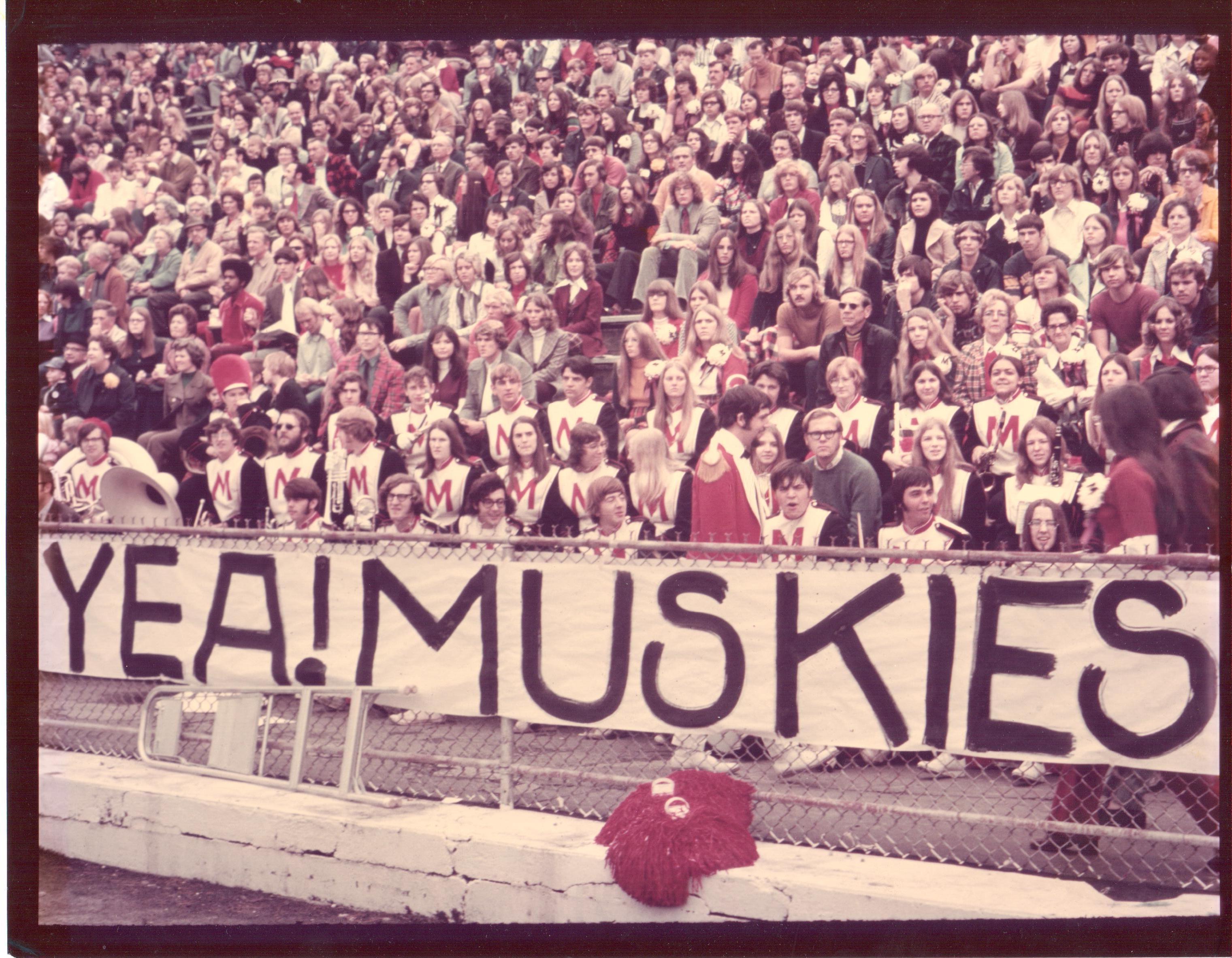 Stages of construction of the stadium 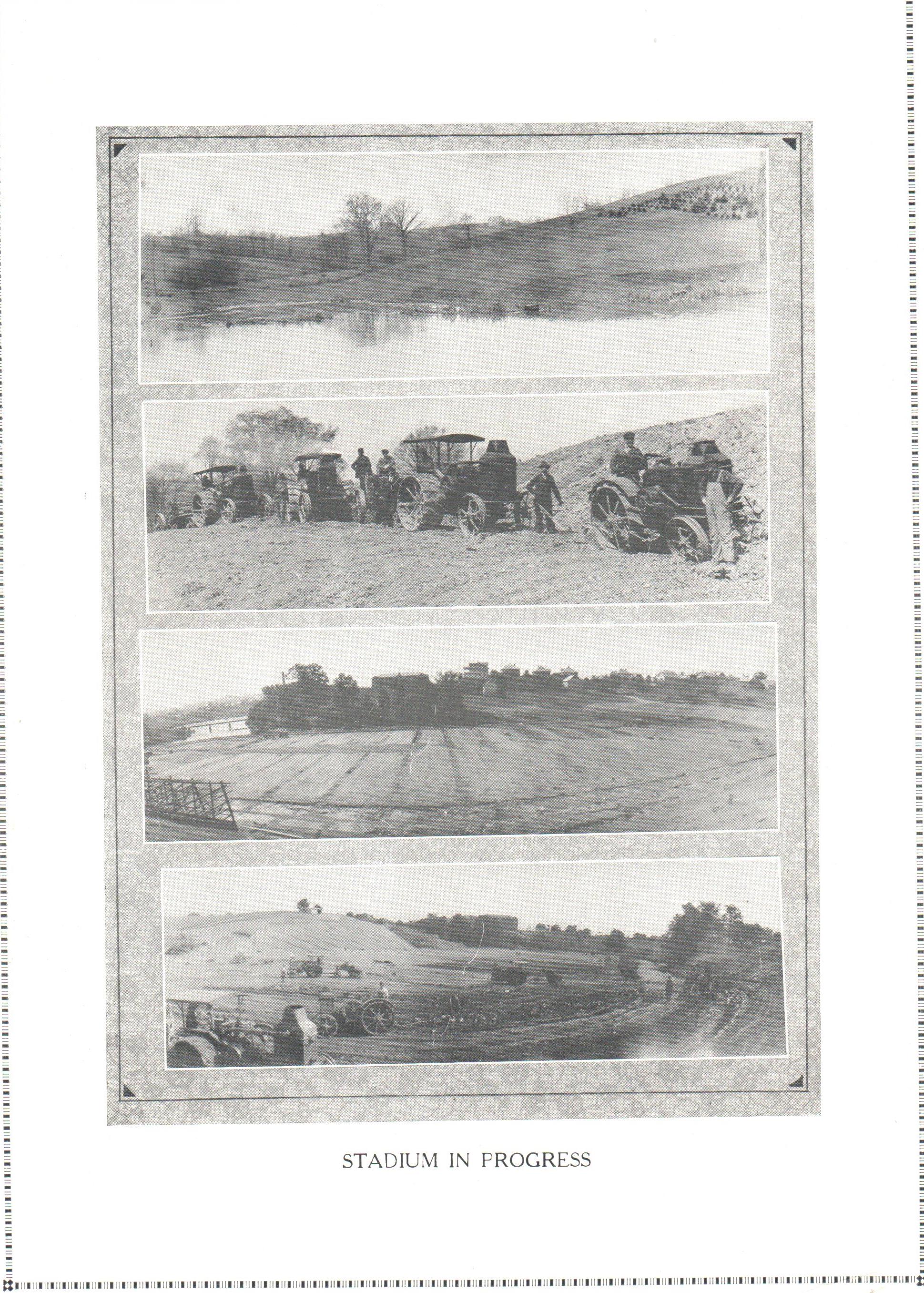 Muskie fans watching a sporting event at the stadium 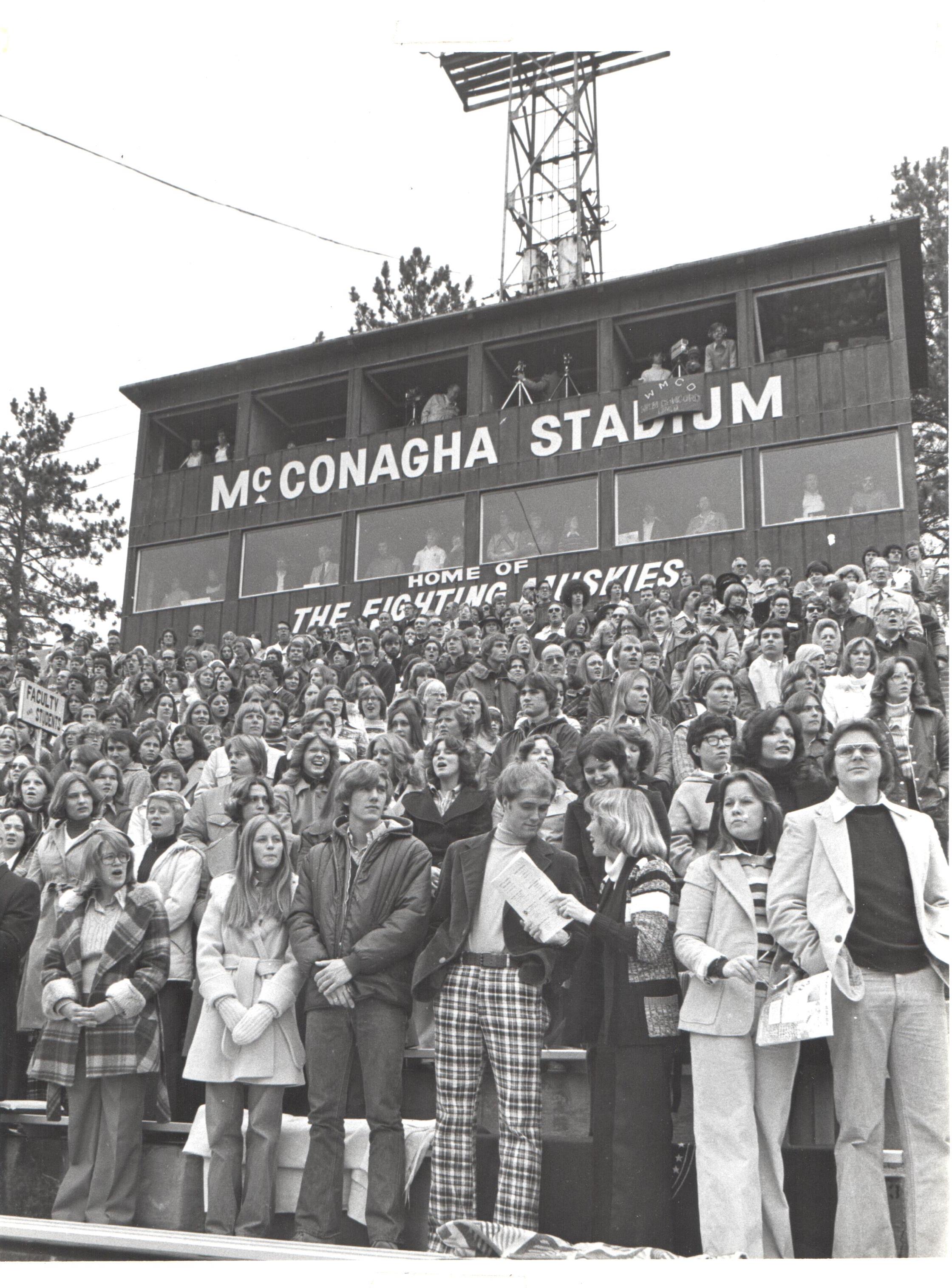 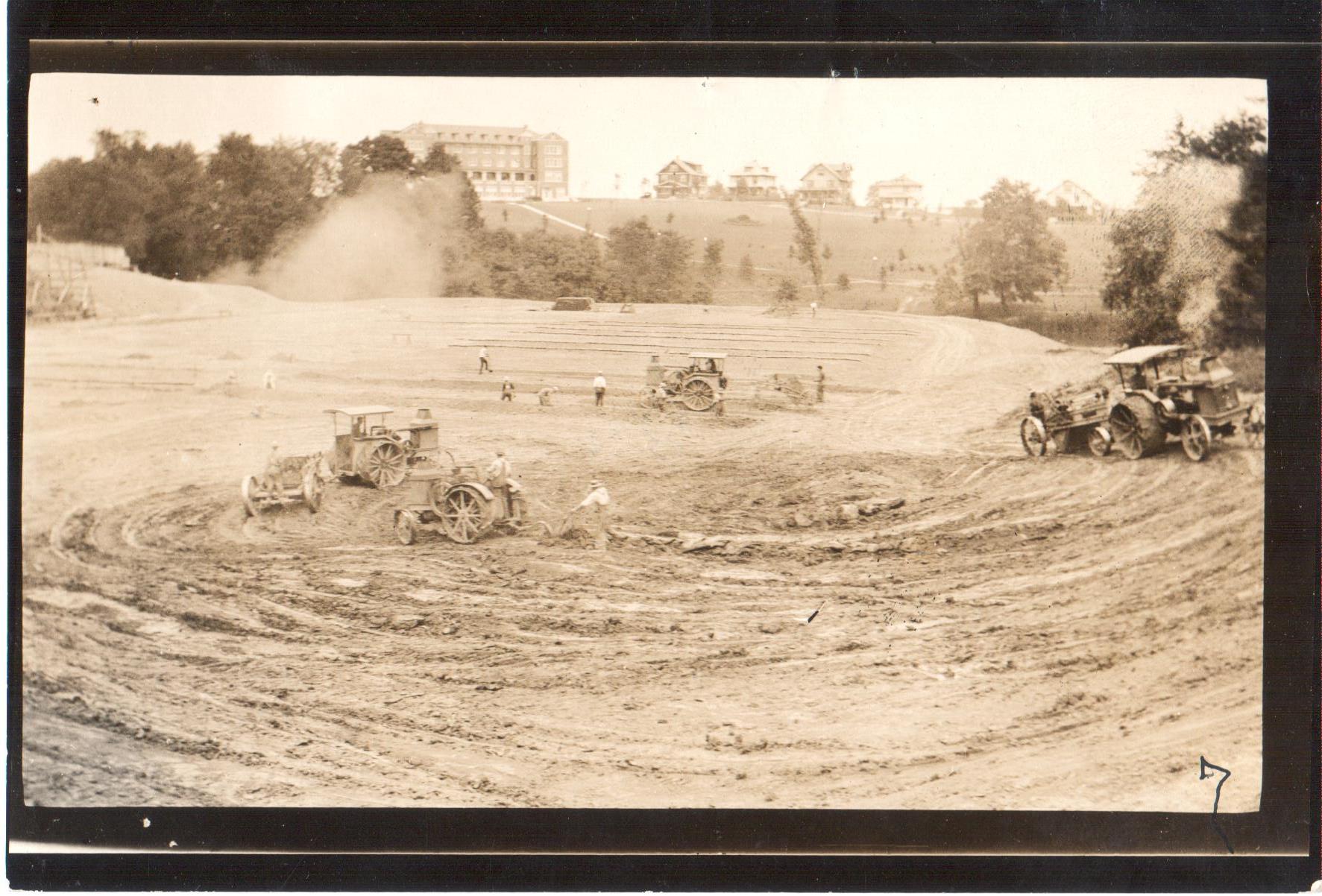 The McConagha Stadium is one of the most energetic places you can visit while on Muskingum Universities campus. It is a place on campus you can find Muskingum students and fans united as one, cheering on the Fighting Muskies. The stadium is the home of the Sherman Field and the Johnson Family Track. Many sporting events have been held on the Sherman field and Johnson Family Track over the almost 100 years it has been on campus. The McConagha Stadium began construction in 1924. The construction was finished in 1925 just in time for fans to watch the 1925 football season from the stadiums seats. Since the stadiums completion, it has held thousands of Muskie fans cheering on the home team, and it has seated numerous fans of the Muskies rivals. Many people only associate football games with this stadium, but the stadium has seated more than just football fans. It has also seated fans of the Mens Lacrosse team, the Womens Lacrosse team, track team, and the soccer teams.
The stadium seats are where Muskie fans watched Edgar Sherman lead the Muskies to glory. Ed Sherman was the football coach at Muskingum for 34 years. Along with head football coach, Mr. Sherman was the athletic director at Muskingum College and a member of the faculty. Ed Sherman not only left his mark on Muskingum University, but also left his mark in college football history. Mr. Sherman was the fiirst coach of Division III football to be inducted into the National Football Foundation’s College Hall of Fame. Ed Sherman became one of the most influential people in National Collegiate Athletic Association (NCAA). From 1967 to 1979, he served as the treasurer and secretary for the NCAA. Hubert Wisenbarger, an incoming freshman at Muskingum College in 1967, had the privilege to play for Edgar Sherman. Hubert described Ed Sherman as, "a man you strived to be like. Ed was caring, kind and compassionate to all of his players. He wanted all of us to be good men on and off of the football field." Ed Sherman not only left his imprint on the college, but also on the young men who played for him.
The stadium has also seated Muskingum students watching their friends in the annual Turkey Bowl. Groups of friends can register as teams to compete against other teams in friendly games of flag football. Games start early in the morning and go all day. Teams get eliminated throughout the day until the final two teams play to determine who the winner of the Turkey Bowl is. The stadium also has been used by fans of the local high school near Muskingum University.
John Glenn High School uses the Muskingum University field for their football games. John Glenn using the field adds Friday night entertainment for the students of Muskingum University. Many university students attend these high school football games as well, reminiscing of their high school days when they were watching the games with their friends, or when they were playing on the field as high schoolers themselves.