Designed by Summer L. Hunt, the Courier Building in downtown Syracuse, New York dates back to 1844. This four-story, trapezoidal Greek Revival style building was the site of Daniel Webster's "Syracuse Speech," during which he proclaimed that resistance to the Fugitive Slave Law was synonymous with treason. The crowd then freed a runaway slave from the custody of U.S. Marshals and cemented Central New York's opposition to slavery. The Courier Newspaper occupied the building from 1856-1905, and Chicago Commercial style architectural designs were added in 1918. During the last century, the building fell into a deteriorated state and was rehabilitated by James Prioletti. The Courier Building now houses a restaurant and apartments.

Modern view of the Courier Building 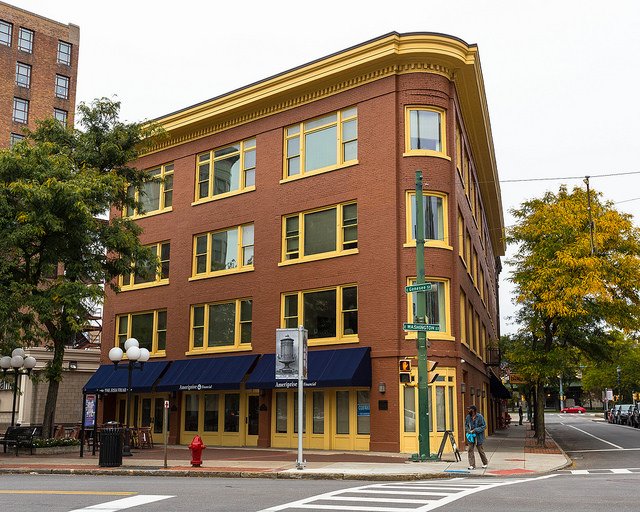 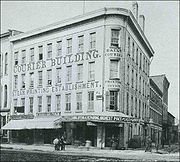 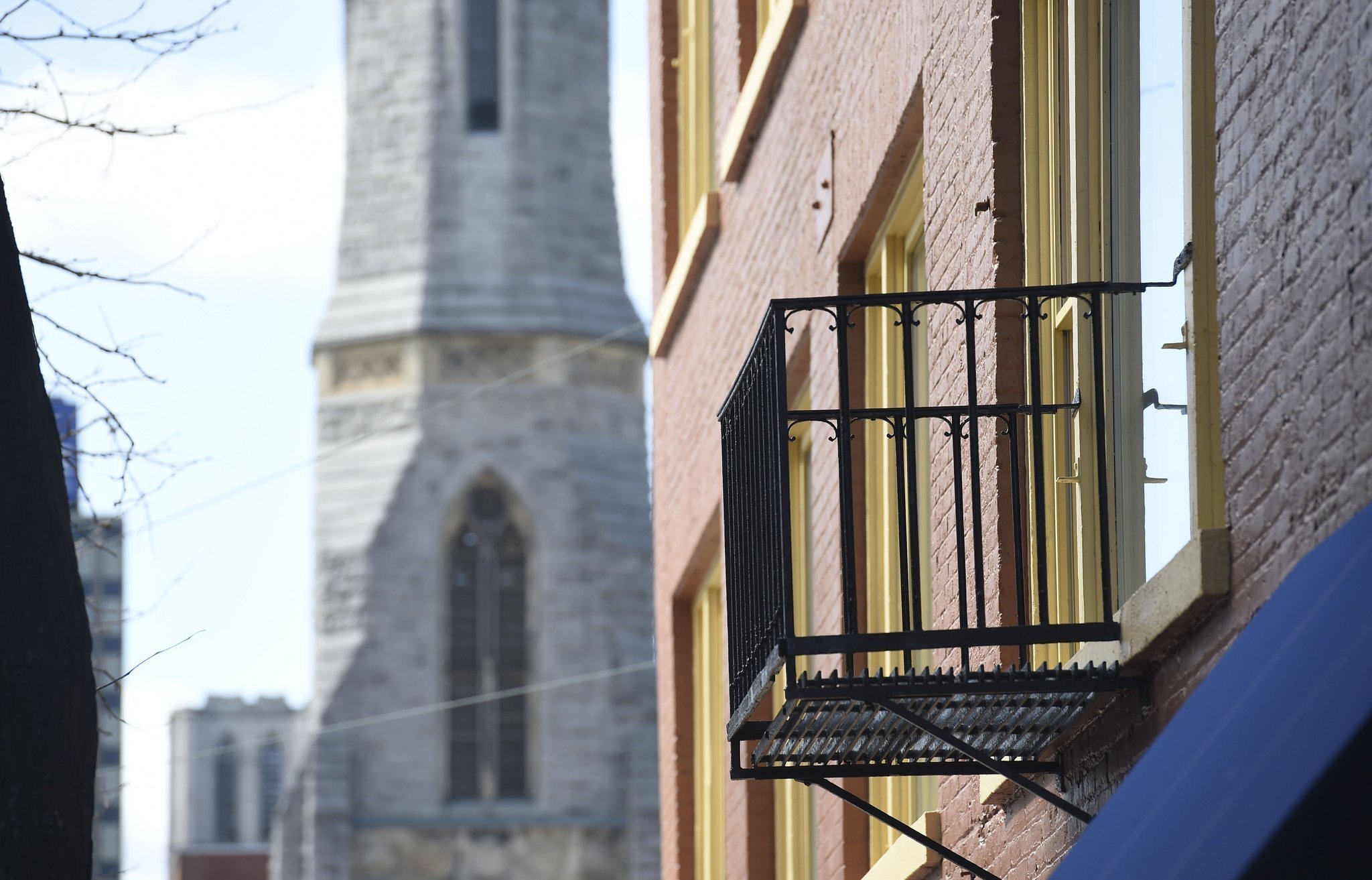 The Courier Building is a three-part building made of the Frazee Block (the four-story corner building), the cutlery block (the four-story building along Montgomery Street), and the fire engineer block (the recognizable triangular section). The first recorded mention of the Courier Building occurred in 1844 when Benjamin Frazee was taxed $3,000 for bricks intended for a new commercial building designed and constructed by local architect Summer L. Hunt. What then became known as the Frazee Block was a four-story, mixed-use Greek Revival style building with a large meeting space on the fourth floor, office space on the third and second floors, and commercial/retail space on the first floor. It became a popular trend in the Northern states during the 19th-century to construct this type of mixed-use building – with public meeting space, office, and retail – within commercial districts near political centers. The cutlery building and the fire engineer block were both erected next to the Frazee building within the next decade. Benjamin Frazee sold the building to Captain Austin Myers in 1851. In 1853, Captain Myers purchased the two adjoining buildings which, as a unit, became known as the Frazee Block and then the Courier Building during the late-19th-century.

Central New York became a hotbed of abolitionist and Underground Railroad activity during the mid-19th-century, with Syracuse being one of the region’s leading abolitionist cities. The Fugitive Slave Act of 1850 ignited a fire underneath many with anti-slavery views and only worked to further propel the abolitionist movement. By mid-May 1851, the anti-slavery sentiment in Central New York became so prevalent that the President of the United States, Millard Fillmore and Attorney General John Crittenden traveled to Syracuse and spoke to the city against its illegal abolitionist activities. Then on May 26, Secretary of State Daniel Webster made a visit to Syracuse to deliver his famous “Syracuse Speech.” From a second story balcony on the Frazee Building overlooking a large crowd below on Montgomery Street, Webster condemned the city for its anti-slavery activities and reminded them of the illegality of such behavior, calling those abolitionists in the city traitors. The crowd below Webster did not react positively to being harangued in such a manner and demonstrated their opposition to Washington a few months later. While the anti-slavery Liberty Party held its state convention in Syracuse in early October 1851, a runaway slave named William Henry (aka Jerry) was arrested under the Fugitive Slave Act. Hundreds of abolitionists rose up and freed Jerry from jail. Jerry made his way to Oswego where he ultimately crossed Lake Ontario into Canada. The event became known nationally as the Jerry Rescue and served as Syracuse’s declaration against slavery.

In 1856, the Syracuse Daily Courier moved into the Frazee Building and remained there until 1905. The Courier, as it became known, is the building’s longest tenant and the building’s namesake. It is not known when the Frazee Block became the Courier Building, but the name stuck. During the time that the newspaper was in operation, a few exterior alterations occurred to the building such as repainting the red and white striped exterior and rebuilding the cornice to a similar size and scale of the original 1844 cornice. After the Courier ceased operation in 1905, the Myers family sold the building and the Loyal Order of Moose purchased the building in 1918. The Syracuse Chapter #615 of LOOM occupied the Courier Building until 1949. The LOOM made several significant alterations to the building in the 31 years of its occupation, such as increasing the north section to four stories, adding a new cornice, introducing Chicago commercial style windows on the upper floors of the Frazee Hall section, and consolidating all three buildings into one floor plan. The Moose Lodge moved to a new location and sold the Courier Building in 1949. Again, the new owner made some noticeable changes to the building when aluminum storefronts were added and the upper floors converted back into office space. Then in the 1970s, metal siding was added to the building’s exterior covering up the alterations made in 1949.

A fresh face came to the Courier Building in 2000 when Chase Corporation & Chase Architectural Associates began remodeling the building for the L’Adour Restaurant. The interior was redesigned to accommodate for a modern French restaurant with kitchens, fixtures, and office space. The 1949 storefront was also replaced. L’Adour operated in the Courier Building for the next thirteen years until the restaurant closed. Since then, James Prioletti came into ownership of the building and began a certified rehabilitation project on the building to provide commercial and retail space on the first floor and apartments on the second, third, and fourth floors. The Courier Building today is nestled neatly into Syracuse’s downtown and offers high end apartments and commercial space, remaining a hallmark of the city’s abolitionist and industrial past.