This consolidated elementary, middle, and high school was built in 1915-1916 was one of only seven schools that catered to African American students until desegregation in the 1950s. This school is unique in that it has heavy associations with the WPA (Works Progress Administration) which a a welfare program developed with the New Deal in order to help increase economic on the state and federal level during the Great Depression. African American schools were a very important component to school systems during the time period previous to desegregation. In combinations with places of worship, schools helped preserve African American culture and tradition. 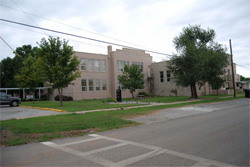 Constructed in 1916-17, the Attucks School served the Black community of Vinita, Oklahoma as a combined elementary, junior, and high school. Stylistically, the school is a combination of a simplified Art Deco and WPA construction. It was not the only Black school in Craig County, as there were seven, but it was the only secondary school that was available to Blacks until after desegregation in the mid-1950s. While the Vinita public school system readily desegregated as required by law following the landmark decision of Brown vs. Board of Education, it took upwards of three years for desegregation to occur in Vinita.