Denison House was a woman-run settlement house in Boston founded in the late 19th century. It welcomed especially immigrants, who were coming in great number especially from Asia and Europe and offered courses in both English literature and language and in more practical skills. Although the settlement house belongs to the past, it still maintains a spot on the Boston Women's Heritage Trail. 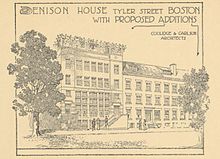 Denison House was a woman-run settlement house in Boston's old South Cove neighborhood. It was the third college settlement of its kind in the United States, with the mission of offering daycare, education, and healthcare, especially to immigrants. In fact, the neighborhood around the House in the 1890s consisted mostly of Irish immigrants, but changed to include more of the newly arrived Jewish, Italian, Syrian, Chinese, and Greek immigrants.

Founded in 1892 by the College Settlements Association, the Denison House provided a variety of social and educational services to neighborhood residents. Several notable women worked there, including Nobel Prize winners and pioneering aviator Amelia Earhart.

Denison House was modeled after Jane Addams's Hull House in Chicago (the first settlement house). The women volunteers of Denison House hoped to bring people of different backgrounds together under one roof. In the early twentieth century, intense immigration had caused overcrowding in Boston. Most immigrants and poor people were relegated to slums or rooms too small to live in.

The house was first organized as a relief agency that could distribute such basic necessities as milk and coal and it soon started offering classes in nursing, English literature, crafts, cooking, and carpentry, as well as sports and clubs. It had a library, a gymnasium, and a clinic.

Local men and women who frequented Denison House, most of whom were immigrants, were encouraged to celebrate their heritage through cultural festivals and craft exhibitions. This was the case of the Pennsylvania Museum and School of Industrial Art display on "the work of Italian, Syrian, Greek and Armenian craftsmen and craftswomen, in silver, leather, linen, silk embroideries, etc., from old designs copied in part from treasure pieces in palaces, museums and private collections in Europe and America." Such an event was a novelty at the time. As the tenement neighborhoods grew in size and population, increasing native aversion to immigrants turned into hate for their religions and cultures. Immigrants were often blamed for overcrowding and low wages.

Among the many who volunteered at Denison House, Amelia Earhart worked there as a teacher and home visitor during the week and later moved into the House to devote more time to her work. In particular, she was in charge of adult education and supervised the girls' program.

Later on, in 1942, Denison House relocated to Dorchester. The original site on Tyler Street, now occupied by apartment buildings, is a stop on the Chinatown/South Cove walk of the Boston Women's Heritage Trail.